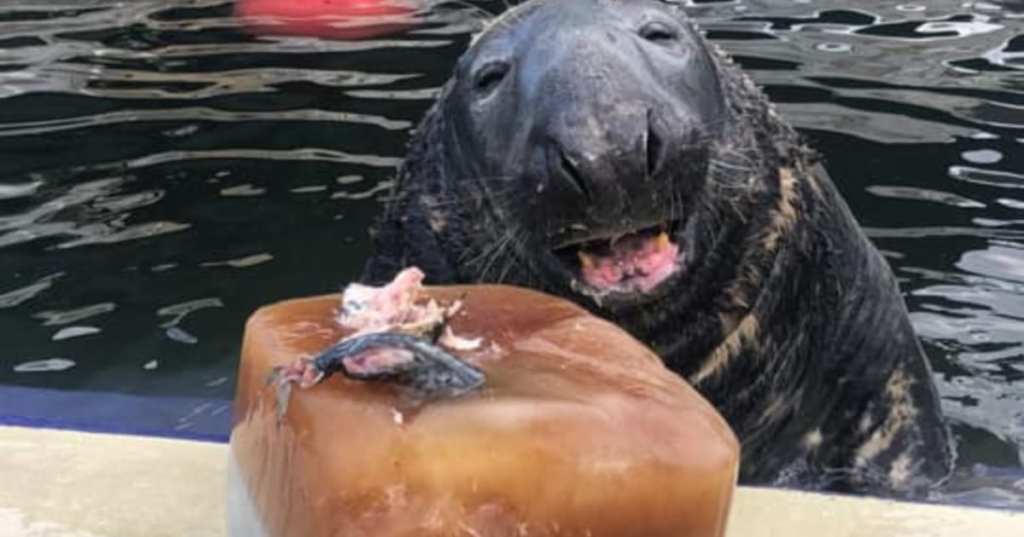 This Seal Celebrated His Birthday With a Giant Fish Cake

Birthdays are milestones to be celebrated, and celebrated with cake and ice cream.

Note: the ice cream and cake are best if combined according to by 4yo, too, but not if you add fish.

According to Yulelogs the grey seal, a cake made of ice and fish is the absolute best.

Yulelogs was first rescued as a pup, wayyyyyy back in 1989.

A marine park in the north of England took him in and cared for him for some years, but when the park closed, they released their animals back into the wild.

According to the Cornish Seal Sanctuary’s website, where Yulelogs resides today, he wasn’t able to feed himself well after so much time spent in captivity.

“Three months after his release, Yulelogs was rescued by the RSPCA after receiving calls from concerned members of the public saying he had been chasing people with buckets on the beach, believing they contained fish.”

When the RSPCA collected Yulelogs for the second time he was desperately underweight – clocking in at 132 lbs instead of 551 lbs – and so they asked the Cornish Seal Sanctuary if they could give him a home for the rest of his days.

He’s 31 now, and just as happy, energetic, and enthusiastic as he’s always been.

Everyone at the sanctuary adores him, and since 31 is quite the milestone – the average age of wild, male grey seals is around 25 – they wanted to celebrate.

Georgina Shannon, the marketing and media coordinator for the sanctuary, said it was a hit.

It’s a great form of enrichment for him also, as it requires a bit of thinking on how to get the fish out of the cake!”

This seal looks so happy and excited and it’s just too cute. It’s kind of giving me life, today!

Every creature deserves a birthday party like this at least once in their lives, don’t you think?