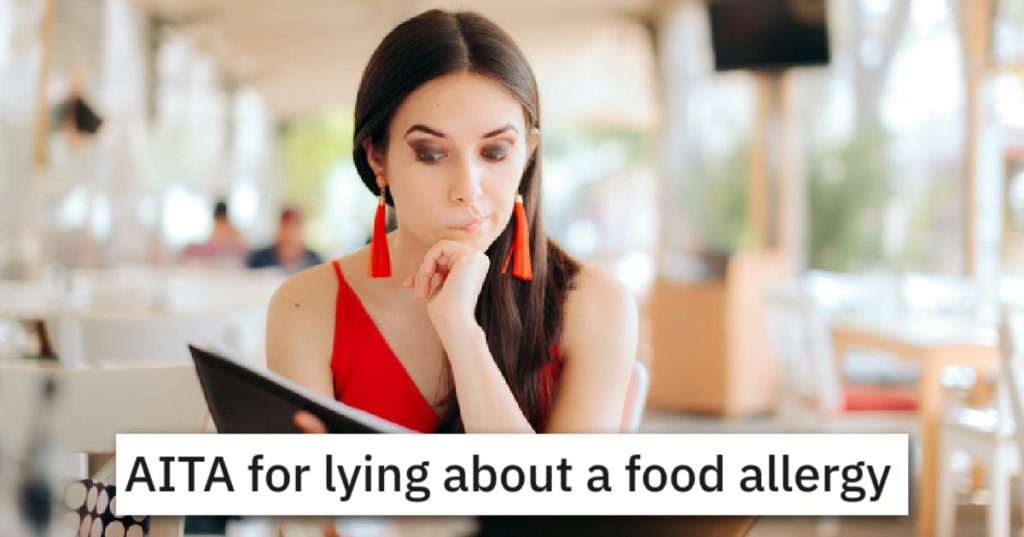 If you or someone you love doesn’t have a food allergy, there’s a good chance that even if you’re technically aware they could be life threatening, it’s tough to grasp how tough it can be to do things like eat out.

If you or someone you love does have a food allergy, there’s a good chance reading this post will rile you up.

OP is a long-time vegan who no longer lives in the small town where her family resides.

Attitudes toward her lifestyle there aren’t great, and so when she visits she does her best to just avoid eating out in the first place.

I’m vegan, have been for over 5 years. I’m lucky to live in a major city with a plethora of entirely or partially vegan restaurants, but, when I visit my family in rural Pennsylvania, my options become nonexistent.

Attitudes toward veganism here range from ignorance to outright hostility.

Sometimes she can’t, though, and things came to a head when she was forced to dine out for the occasion of her sister’s wedding rehearsal.

I try to avoid eating out with my family when I’m home, at ALL costs, but sometimes it simply isn’t avoidable—for example, my sister’s wedding rehearsal dinner.

The “nice” restaurant in town is definitely meat and butter based, and after poor experiences in the past, OP decided she would have to take drastic action if she wanted to be able to eat at the rehearsal dinner.

My sister had her dinner at the foremost “fine dining” establishment in this town. It’s a big old tavern that bills itself as a “French-influenced steakhouse”. Menu fare is every imaginable cut of steak drowned in butter, with some chicken and fish drowned in butter, plus sides of veggies and mashed potatoes that are—yes, smothered in butter. The one or two vegetarian dishes are buttered and drowned in creamy sauce. Given that my little brother used to wait tables here, I know that they frown upon substitutions and don’t use much veggie oil for the sake of “quality”.

I’ve had two negative experiences here, too. I tried to explain my vegan diet my first time here, in depth, yet my sad little plate of steamed Broccoli was drizzled with butter and my iceberg lettuce salad came with ranch. The second time, a chef came out personally and promised me that his tomato pasta dish was vegan—only for me to find that they’d swirled parmesan cheese into the red sauce to disguise that they’d accidentally sprinkled it on top. That incident broke my trust completely.

So, she told them she had a handful of allergies. The information apparently sent their kitchen into a tizzy (even though they just served her plain pasta) and cost her parents a bit of cash.

For my sister’s dinner, I called ahead and told the chef that I have life-threatening food allergies to meat proteins, dairy (including butter), and egg. Finally, they took me seriously. I was served a dish of plain pasta with salt and pepper with fruit, which sucked but I appreciated the consideration.

For those allergies, though, they had to scrub down the entire kitchen, clean the fryers, check the ingredient lists of their products, etc. That prep apparently cost them an extra 2 hours, and—I didn’t realize this—they charged my parents (who are paying for the rehearsal) an extra several hundred for their time.

She’s paid back the cash but everyone is upset with her for the lie, and she’s worried the wedding is going to be awkward.

My sister and parents are LIVID. I already sent my mom the several hundred needed to cover the extra cost, but they’re upset at me for lying and humiliating the chef and restaurant, whom they have close ties to.

My sister’s wedding is this weekend and something tells me that it’s gonna be tense. Personally, I think that if this restaurant is gonna continue with their ignorance and inconsideration, they got what they deserve.

AITA for ensuring my needs are met?

Does Reddit agree with her family? Let’s find out!

The top comment was not the only one to accuse OP of making life harder for those who have actual food allergies. 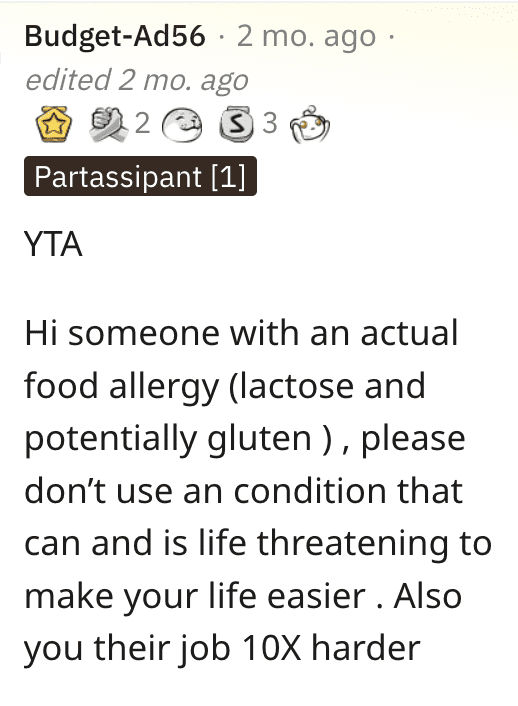 There’s a difference between a choice and literal potential death. 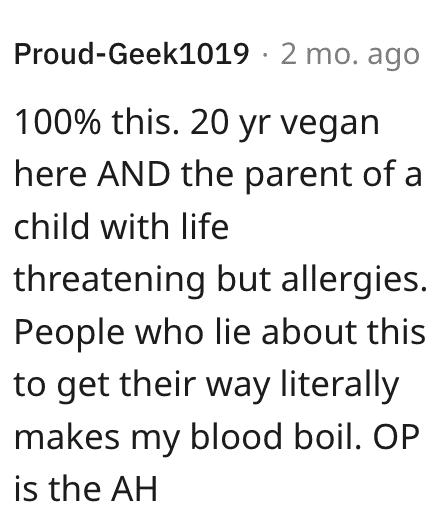 This person says restaurants brush off allergy claims because of people like her all the time. 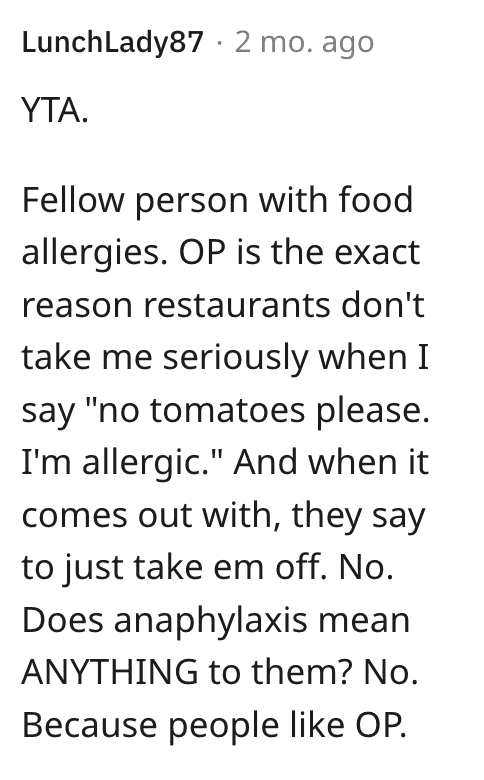 But most people would never make that up. 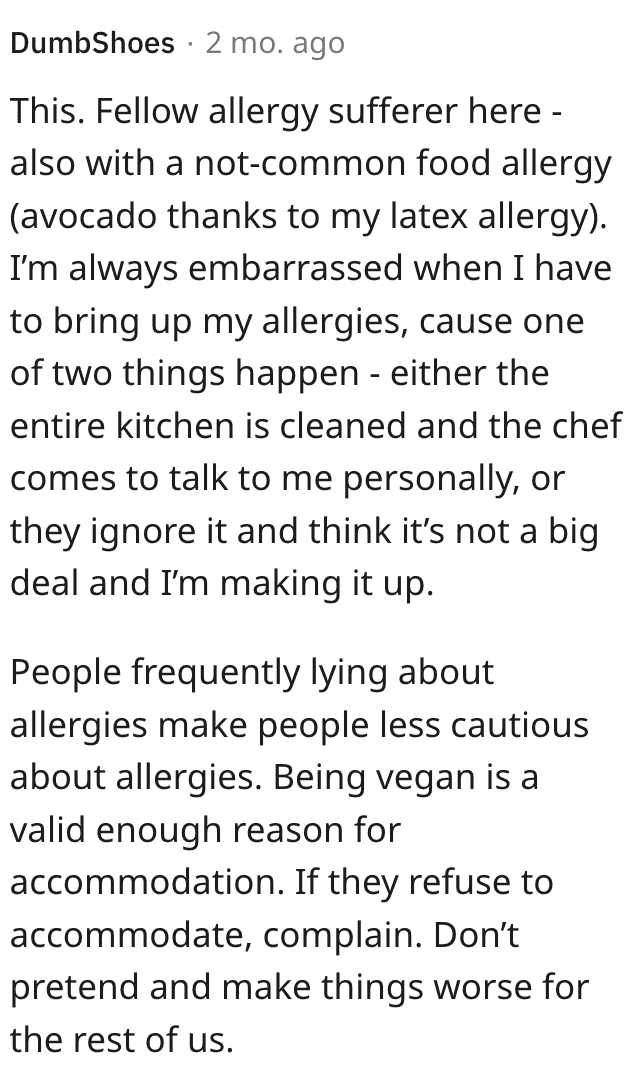 Other people were curious why OP would want to eat somewhere she couldn’t trust the kitchen in the first place – she could have eaten before or after. 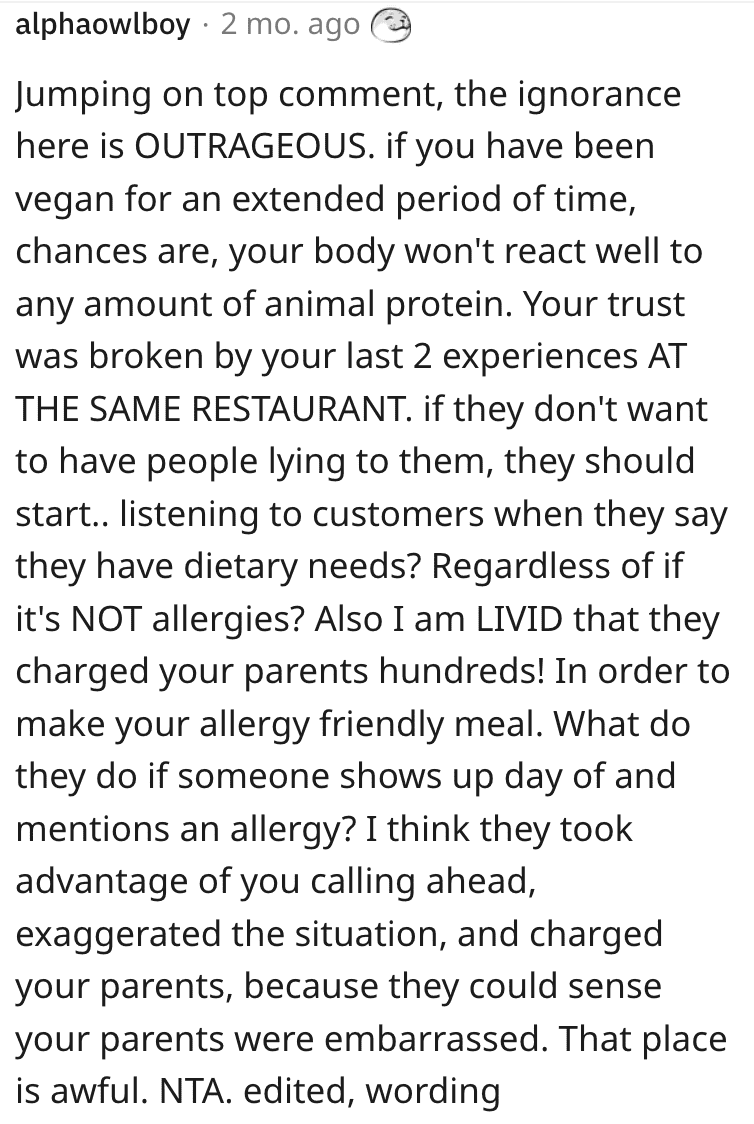 I have to agree that OP had more than a few options here, and lying about an allergy probably wasn’t the way to go.

Would this have upset you? Tell us why or why not in the comments!