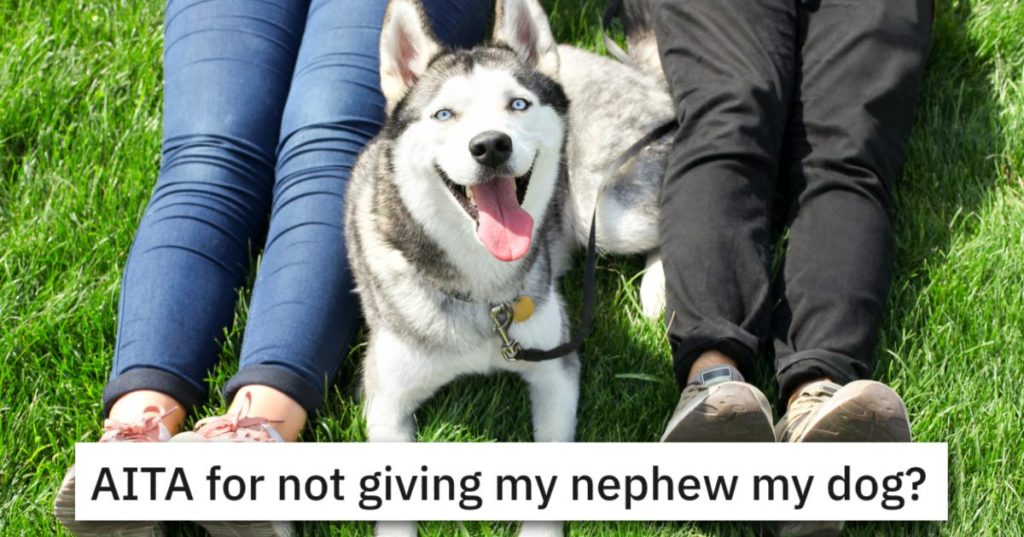 This Woman’s Nephew Wants Her Dog – Was She Wrong To Say No?

I don’t know many people who aren’t super attached to their dogs – they’re members of the family, after all, and no one wants to give them up without a very good reason.

But what if multiple people are attached to the dog, and suddenly they’re not all residing under the same roof?

OP took in her sister and her nephew when they were going through a hard time, and they all lived together for six years. Early during that time, OP adopted a husky puppy.

The dog is trained well and exercised well, and only uses a kennel when he needs time and space away from the rest of his “pack.”

Just some background info. My (33F) sister (35F) moved in with me and my partner six years ago when my nephew Jayden (now 11) was 5. She was going through a really rough break up with Jayden’s father and needed support. She started dating Steve about 2 years ago and they just recently moved in together.

About a year after they moved in, I adopted a husky mix named Flynn. My nephew loves Flynn to pieces. Flynn is a very well behaved but active guy. We have a fenced in yard for him and we also take him for two walks a day.

He was kennel trained as a puppy while we were working on potty training, but now that he’s older we never lock him in his kennel. The door is just open with his dog bed and toys in so he can lay in there as he pleases.

Recently, her sister moved in with a boyfriend of two years and took her son with her. OP has encouraged him to try to give the new “family” and living arrangements a fair shot.

Here is where our issue started. My sister and Jayden just moved in with Steve. Jayden was really sad to be leaving our home, but we tried to make plans so he could come back and visit whenever he wanted and encourage him to give Steve and their new family a chance.

Her nephew called and asked if he could have the dog, despite the fact that his stepfather does not like big dogs and has always avoided it when visiting OP’s house.

OP said no, explaining her reasoning and letting her nephew know he could come over any time to spend time with the dog.

Jayden asked me if he could take Flynn to his new house. I was very sympathetic and had a serious conversation with him about it, but I told him the answer would have to be no.

Steve is afraid of big dogs, he always avoided Flynn while visiting in our home and would make comments about keeping him in his cage.

Also as much as my nephew loves Flynn, he was never responsible for his care in anyway and I don’t think he understands how much responsibility it takes.

Her sister called, super upset and railing on OP for declining. According to OP, this behavior is super out of character.

I thought that was the end of the story but I recently got a phone call from my sister, furious that I wouldn’t let Jayden have “his” dog.

She said that Steve wanting to kennel the dog wasn’t a deal breaker and I was just being selfish. I explained to my sister that Flynn needs a lot of exercise, we have a large, fenced in yard (she does not), we take him for multiple walks a day and we never keep him locked in his kennel.

At this point he’s five years old, he hasn’t been locked away in his kennel since he was a puppy potty training. She argued with me that he would only be in the kennel until Jayden got home from school and overnight (that’s the majority of the day?) and that she would make Jayden walk him.

I told her that I was sorry but Flynn is my dog and I’m not budging.

Now she’s wondering whether or not she’s some kind of jerk for denying a little boy the dog he grew up with.

She told me that I’m not welcome in her home anymore and that I’m no longer allowed to see my nephew.

This is not behavior that’s normal for my sister and its made me wonder aita for not just giving my nephew my dog?

It’s an interesting dilemma, and you know Reddit is always there for those – so let’s hear what they have to say!

The top comment states that as sad as the situation is, she is not wrong for wanting to keep her dog where he belongs. 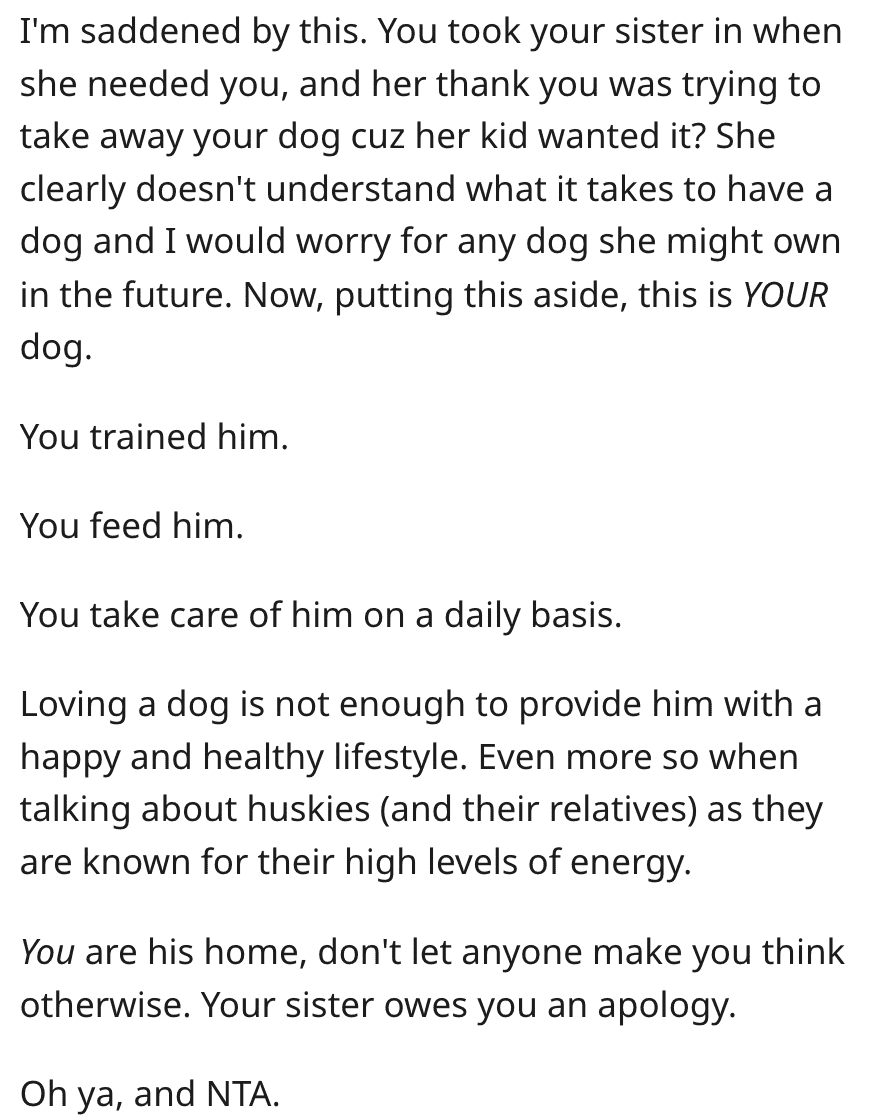 More than a few people are worried that the new boyfriend isn’t as peachy as he might appear. 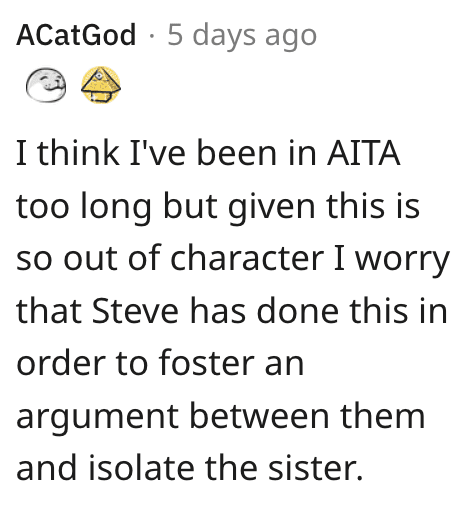 It’s too bad the sister is refusing to let OP maintain a relationship with her nephew due to their argument. 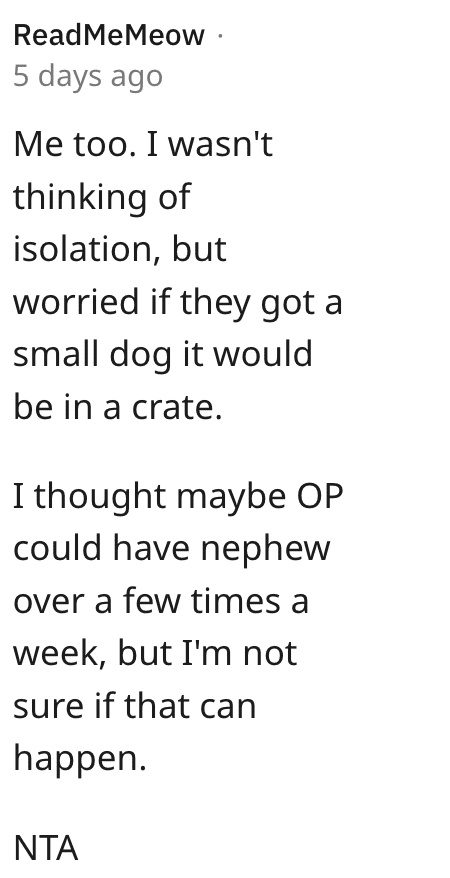 Not a lot of people were giving the sister the benefit of the doubt either way. 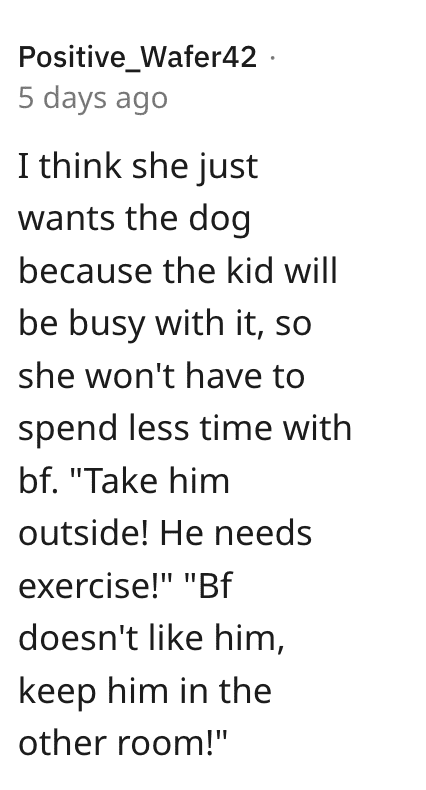 Another living being never solves the problem. 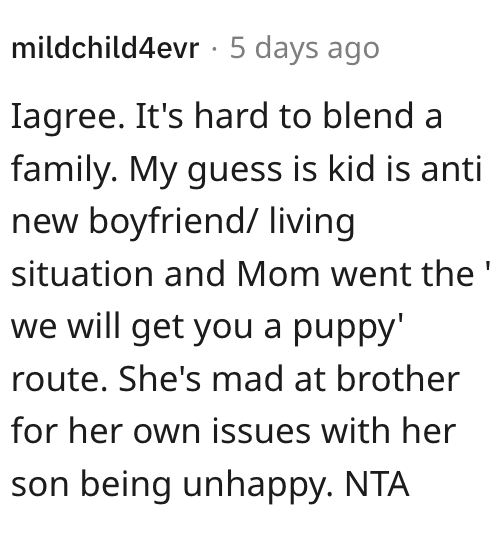 It definitely seems as if there’s more going on here than meets the eye, don’t you think?

Let us know what your thoughts are in the comments!