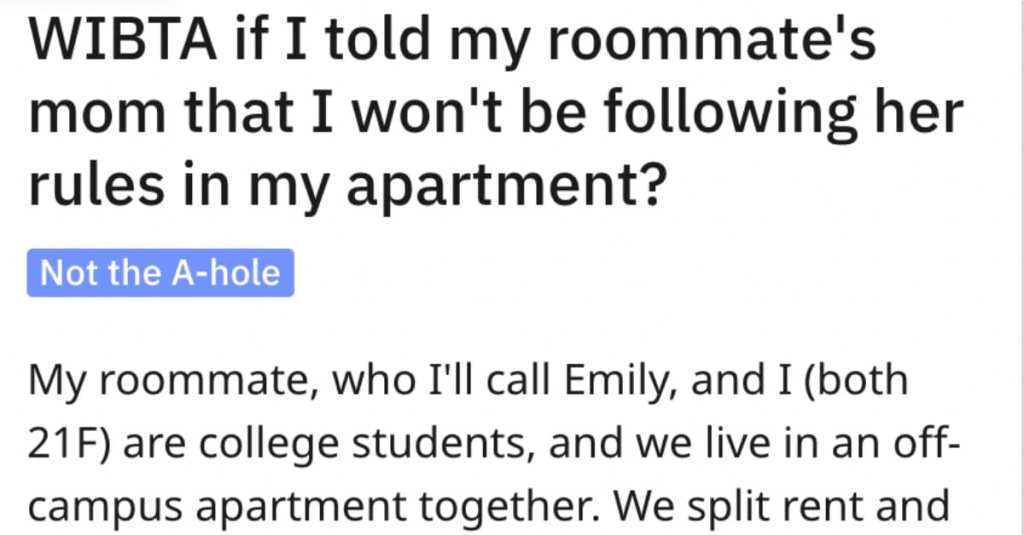 This Woman’s Roommate’s Parents Want to Set Rules For Her As Well. She Revolts.

I would assume the majority of parents in the world realize that, once children go to college, your children are going to make their own decisions – good or bad, against the rules they’ve always had or not, but it’s time to let go.

Some parents don’t realize that, apparently, and believe that, because they pay the bills, they’re allowed to set the rules and expect them to be followed.

Her roommate, Emily, has strict parents who have informed OP – through Emily – that they expect the “no boyfriends sleeping over” rule to be followed.

My roommate, who I’ll call Emily, and I (both 21F) are college students, and we live in an off-campus apartment together. We split rent and utilities 50/50. I pay for my part myself, but Emily’s parents pay for hers.

Emily’s mom is a bit overbearing and has a lot of rules for our apartment- the main one being that no boyfriends are allowed to sleep over, as it’s against her religion. She specifically told Emily to have a talk with me about this subject to tell me this isn’t allowed, AFTER we moved in.

Now, both OP and Emily have their boyfriends sleep over and neither of them has a problem with it. The entire situation rubs OP the wrong way, and she’s wondering whether she would be wrong to tell her roommate’s mother – respectfully – that she pays her own rent and won’t be answering to anyone else’s rules.

Emily doesn’t care if I have my boyfriend over for the night, as she does it all the time without telling her parents. However, it strikes me the wrong way that Emily’s mom feels like she can impose non-negotiable rules on ME when she doesn’t pay for any of my part of the bills.

Today Emily’s parents are coming to visit , and I expect her mom to go over all of the rules that she’s set with me. WIBTA if I told her mom that, with all due respect, I am paying my portion of the rent and she doesn’t have any control of the things I do in my own apartment?

She feels like it’s better to be direct but polite rather than just agree, knowing she’s going to go behind the woman’s back.

This woman is trying to impose her own religious beliefs onto me in an apartment that I pay half of the bills for.

The idea of just rolling over and telling her that I’ll obey her demands when just doing my own thing behind her back doesn’t sit right with me.

Her own mother thinks that’s the best course, though, and to let the parents believe they have some control over the situation since they do pay for half of the apartment.

However, after speaking to my own mother about the subject, she thinks that it would be disrespectful. She says that even though I am paying for my half of the rent, Emily’s family is still paying for this apartment and they should be able to have a say of what goes on, even if Emily and I just end up breaking those rules anyway.

The roommate doesn’t care either way, because she says her dad is ok with the roommate behaving the way she sees fit, so she’s wondering what the best way is to handle the whole thing.

I’ve spoken to Emily about this subject, and she doesn’t care if I tell her mom that I will or will not be following those rules, as long as I don’t indicate that Emily breaks them.

So, I was hoping to get some outside opinions here.

Reddit, what do you think? WIBTA if I told my roommate’s mom that I won’t be following her rules in my apartment?

She posted a lengthy update (or three) about their visit that reveals there’s quite a bit more going on that originally mentioned.

Okay so her parents just went home, so this will be the final update. As I expected, her mom DID bring up the rules, but it didn’t go in the way that I expected.

First, a little bit of background info about Emily’s relationship with her mom. They argue about politics a lot. I won’t go into specifics but essentially Emily is on one end of the political spectrum and her mom is at the exact opposite end. Her mom is also into a lot of conspiracy theories and this topic causes a lot of arguments between the two.

Anyways, I guess the entire time they were together yesterday, Emily and her mom were arguing over politics. This morning, when I came out of my bedroom, I overheard them arguing about it again. They stopped when they saw me.

I sat down and was having a casual discussion with Emily and her parents, and then her mom started saying something about the vaccine. Emily just snapped at her mom, and told her to not bring politics up. Emily’s mom was quiet for a minute, and then she brought up the rules. Emily snapped at her mom again, told her that she already talked to me about it, and to just drop it. It wasn’t brought up again.

And then that was that. We all talked casually about school and work for a little bit and then they packed up and left.

Nothing was said and the girls are going to continue about their business.

I honestly feel like this is what goes on for the majority of college students, but let’s see what Reddit had to say!

I mean, you can try it more nicely at first, but this has to be the bottom line. 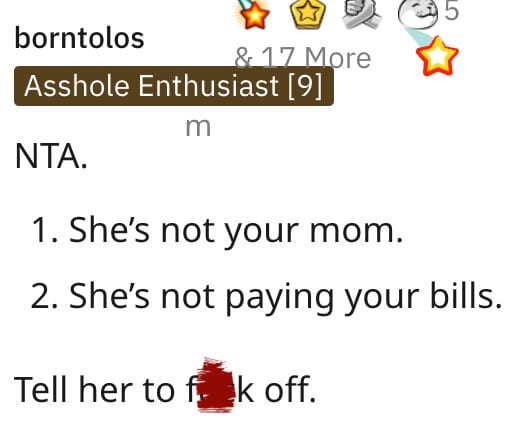 She should consider the potential fallout of confronting the woman, though, and decide whether or not it’s worth it. 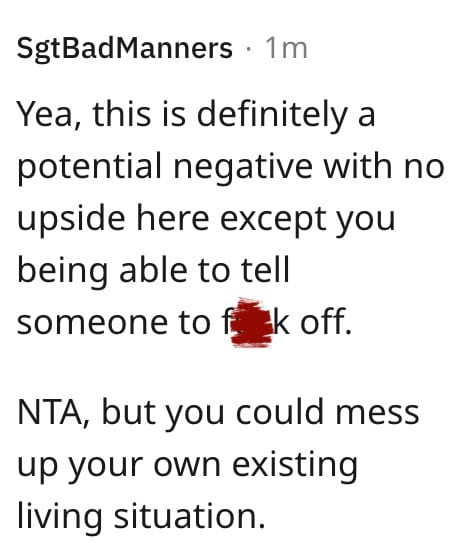 Sometimes avoidance really is the best and most mature course of action. 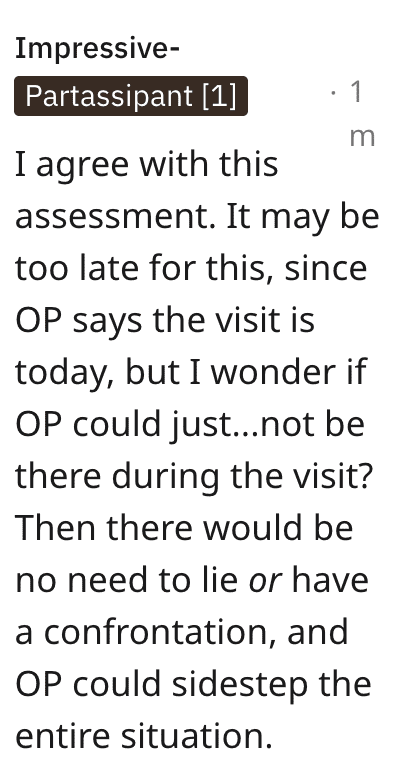 Maybe just wait and see how things go down the road – we don’t always have to go looking for fights, after all.

If the mom brings it up, though, it’s perfectly fine and healthy to set your own boundaries!

Reddit’s got it spot on here, I think, though it seems like OP sort of figured out the best course of action on her own, too.

What do you think? Were you OP or the roommate in college? Tell us in the comments how you handled tough roommate stuff!