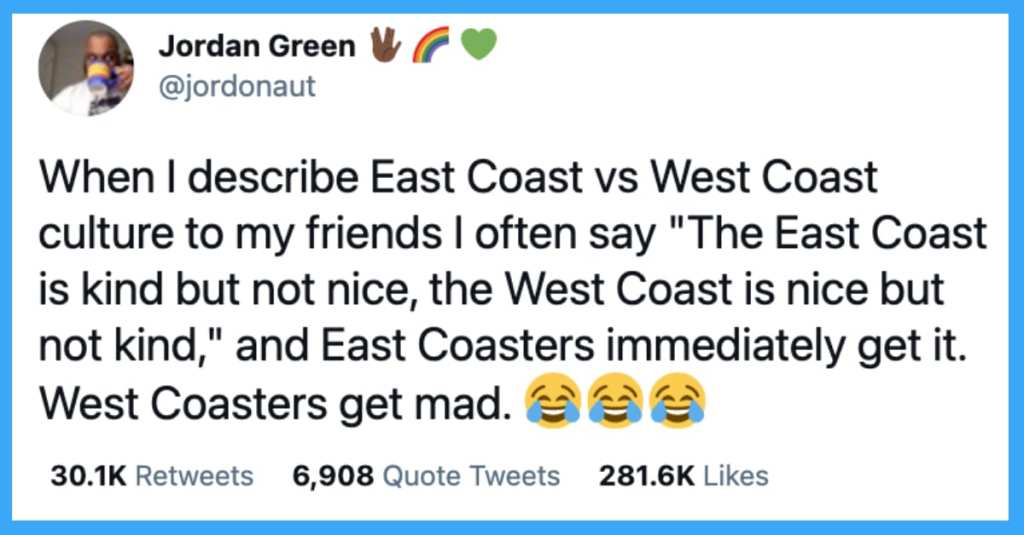 Tweet Explains Why It’s Better to Be Kind Than Nice

It takes a minute to digest that statement, doesn’t it? It’s better to be kind than nice.

But when it comes down to it, it just might be true.

Recently somebody tweeted the following…

Nice is generally defined as polite, appropriate, socially acceptable. It refers to tone or appearance. Kindness refers to action, characterized as being, according to Merriam-Webster, “sympathetic or helpful in nature.”

Jordan goes on to explain what he really means.

Niceness is saying “I’m so sorry you’re cold,” while kindness may be “Ugh, you’ve said that five times, here’s a sweater!” Kindness is addressing the need, regardless of tone.

It might sound like semantics, but in today’s world of unfiltered opinions and shouting from the social media bully pulpit, it’s a concept that starts to ring true.

Much has been said about how it is possible to be one without the other: nice, without kindness. Or kind, but unfriendly or impolite.

Take the sweet Southern lady who says, “Bless your heart,” but means something quite the opposite.

Or the gruff stranger on the subway who sighs at your ineptitude as he offers to untangle your earbuds.

It all goes back to the idea of looking at someone’s deeds as the true measure of their character, and not simply at the words they say. It’s Mr. Rogers’ mantra, “Look for the helpers.”

Don’t get me wrong. Nice is good. It can go a long way towards making the daily grind more tolerable.

But nice doesn’t necessarily change anything in the same way kind deeds can.

It’s nice to wave at your neighbors when you see them while walking your dog. It’s kind to bring them groceries when they’re sick and can’t get out.

It’s nice of a passerby to feel sympathy for a homeless person that they pass on the street. To hope their fortune changes and that they’ll be okay.

But it is kind to offer that person a warm jacket or a hot meal.

It’s a little like saying, “Put your money where your mouth is.”

Does a person talk about the plight Flint residents and how someone should do something about their water? Or, like Little Miss Flint, do they roll up their sleeves and hand out bottled water and home filters?

There are millions around the globe without access to safe drinking water. That is why I am starting #WednesdaysForWater. Every Wednesday I will share a place that needs clean water and how you can help. pic.twitter.com/HDjPh0ziGQ

I’m not saying kind is right and nice is wrong, just that–in all things–kindness may be the most important part of the solution.

What do you think? Let us know in the comments.