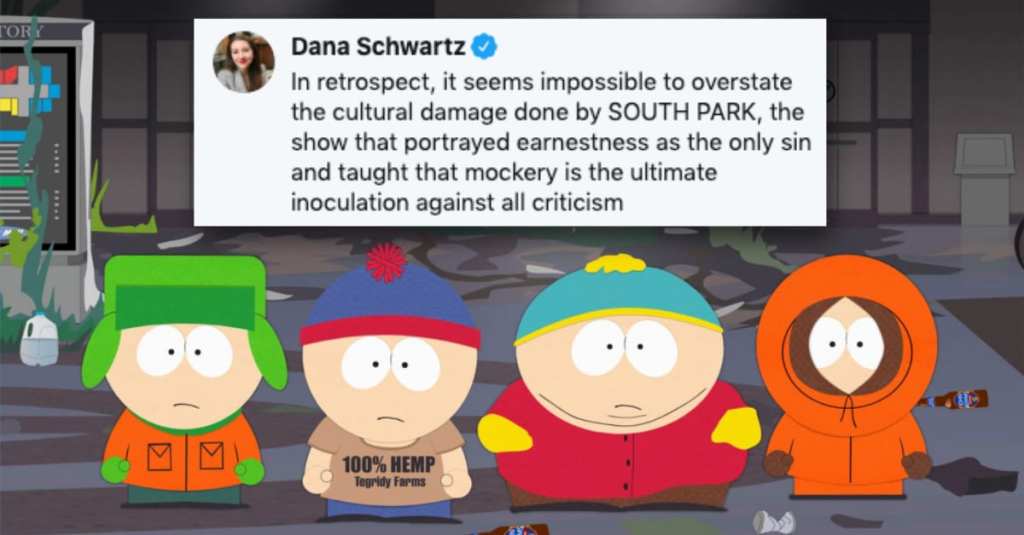 South Park is a well-known show that’s no stranger to public scrutiny and criticism. Sift through the internet and you’ll see many think pieces, essays, and rebukes against the show.

Author Dana Schwartz is one of the many people who has recently voiced her opinion on South Park’s cultural impact—and the damage the show has caused.

In retrospect, it seems impossible to overstate the cultural damage done by SOUTH PARK, the show that portrayed earnestness as the only sin and taught that mockery is the ultimate inoculation against all criticism

That’s true. The show is well-known for mocking almost everyone: world leaders, minorities, the people who oppress minorities, celebrities, and cultural fads.

Here is yet another point the author makes:

But Schwartz also tries to give South Park credit for its recent apology.

It seems lie South Park has been trying to reckon with this—I admit I haven't been watching the show in recent seasons, but I'm fascinated to see this: https://t.co/xjdhGE514y

The show also had to apologize to China for how it was portrayed. But Schwartz also tried to respect the fact that some of the show’s damage is also on the fans themselves. She’s right in pointing out that TV has a big influence on people, but audiences do choose what they take seriously and internalize.

The author then went on to clarify her position to both people who wanted to have a real discussion, and the many trolls that descended onto her timeline.

My point was that South Park seemed to teach that it was always cooler to be reactionary and contrarian, and anyone who criticizes anything is “offended” and that’s the *real* problem. Wonder if that’s the message these fans absorbed…. pic.twitter.com/myccXjG3CN

Schwartz also criticized the show for making it popular to “do nothing” about the world’s potential problems—and be smug about it.

People saying “they make fun of everyone!!!” — that is my point. South Park IS a political show, but one whose message is: both sides are equally terrible so the only correct thing to do is nothing, while mocking it all from your position of intellectual superiority.

And though there were many trolls who were angry at Schwartz, others provided some insight.

I submit that it's the result of denying that age-appropriate content matters, especially with regards to satire.

I remember my brother's friends thinking beavis & butthead were so cool, & always impersonating them.

No! You're supposed to laugh *at* them! pic.twitter.com/b4yZtST5eR

Another Twitter user shared his point of view as well.

It's the "Watchmen" and "Dark Knight Returns" issue in comics. While neither are perfect (and many aspects didn't age well), the issue isn't with them as works of art/fiction.

It's people took the wrong lessons away from them and it's taken decades to get past that.

Schwartz definitely made some good points about South Park and its fans. Even if you disagree with it, dissecting a show’s influence on popular culture always makes for an interesting debate.

Where do you stand? Did South Park influence boys (and some girls) negatively or it just a satire?

We’ll happily entertain your opinion in the comments section.