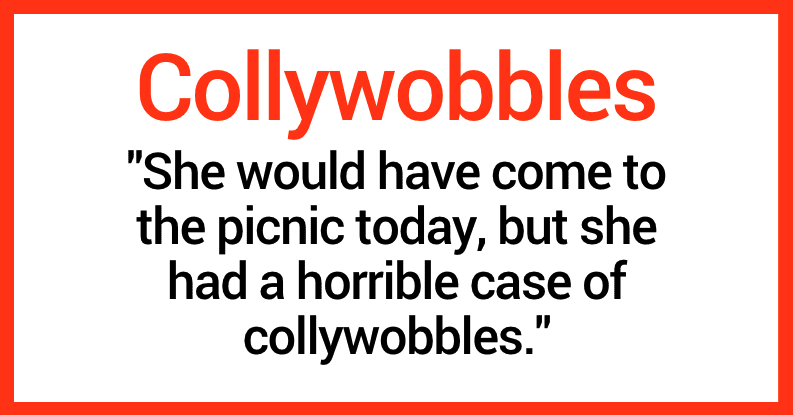 Can You Use These 17 Strange Words in a Sentence?

A thesaurus is one of the best tools you can have, especially if you’re interested in growing your vocabulary and dazzlings others with your language prowess.

English is a fairly confusing language, especially since we borrow so many words from European languages. So having a thesaurus around can really help you stay on top of the words you use.

These 17 words are pretty uncommon, and you basically need to be an English major to use them correctly.

Or do you? Here are the words and their meanings — and even a few sentences so you can understand how to use them.

“The man was apoplectic upon learning Taco Bell had discontinued the Seven-Layer Burrito.”

“Upon arriving to the home of Bathilda Bagshot, Hermione and Harry were momentarily distracted by her bibelot.”

“She would have come to the picnic today, but she had a horrible case of collywobbles.”

“When it came to songs written and performed by The Beatles, the music professor was quite erudite.”

5. Flummox: to cause a state of mental uncertainty

‘The woman was flummoxed when she didn’t hear from her friend for several days.”

6. Hornswoggle: to cause to believe what is untrue

“Many political leaders attempt to hornswoggle their constituency.”

7. Impious: not showing proper reverence for the holy or sacred

“When it came to matters of faith, the young boy was often quite impious.”

‘When he was nervous, the man would emit an endless string of jabber.”

9. Louse: a person whose behavior is offensive to others

“Many would describe the leader of their country as a louse.”

10. Macerate: to wet thoroughly with liquid

“The woman made sure to macerate her pumpkin plants.”

“The man broke off a nubbin of bread for his pet duck.”

12. Piebald: consisting of many things of different sorts

“The quilt was truly a piebald of fabric.”

13. Quaff: to swallow in liquid form

“He chose to quaff his cough medicine instead of taking a pill.”

“When presented with his favorite meal, it was impossible for the man to avoid behaving like a swiller.”

15. Tenebrous: being without much light

“Her favorite part of the home was the tenebrous back corner.”

“The ululate of the screen owl is quite compelling.”

“He was so pleased to see her that his behavior became quite waggish.”

How many of those words did you know? Do you plan to use any in a sentence today?

Let us know which word is your favorite in the comments!