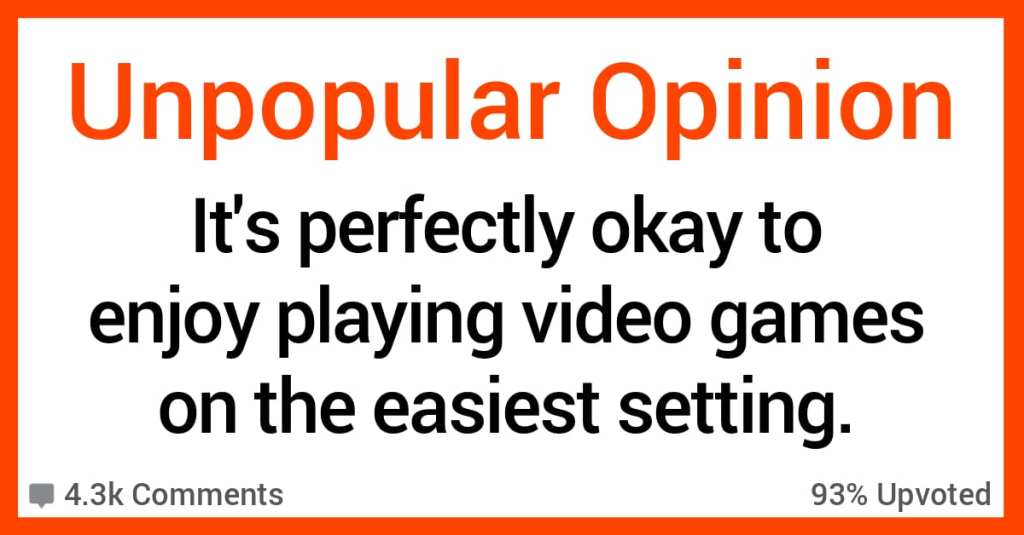 Unpopular Opinion: People Debate Whether or Not It’s Lame to Play Video Games on the Easiest Settings

What I think is important to remember when talking about anything that’s a sort of creative or mindless outlet is that people engage for all sorts of reasons.

Sure, some people log hours on video games with the clear intention of being the best, accumulating all of the rewards, and being able to say they “beat” the game quickly and well.

Other people want to lazily explore these amazing, virtual universes at their leisure, and don’t really care how hard the settings are or what they “get” in return.

It’s totally ok to play video games on the easiest setting to enjoy the story line. from unpopularopinion

According to this guy, any way you want to play is fine – but what did people have to say in the comments?

It may not make you a hardcore gamer, but it def makes your friends gatekeeping a$sholes.

I play lots of games over and over cause they’re fun. Like Witcher 3, but I’ve never played it on Death March.

Guess who cares if that makes me a weak gamer…

Hell, Jedi: Fallen Order even made the “Story Mode” setting.

So that if you really wanna enjoy the story rather than combat or exploration or whatnot, you can!

The words of a true enlightened gamer. No longer held down by petty beliefs and free to just enjoy the way they want. The point isn’t whether it’s easy or hard, it’s about you choosing to play through that experience which in turn helps spread the word and love of the game to others while also helping support the developers and game communities in indirect ways you will never fully know.

Gate keeping is not for a place of genuine love, it is those who want to one-up the other in a never ending game they find themselves in. Someone is always going to be better or worse but to educate and have them look beyond that. Cooperation and expression of respect for the other since we share the same love and want our favorite games to continue regardless.

13. Not everyone wants to rage in their spare time.

Every game I’ve played so far on the PS4 has a story mode.

It’s kind of nice because I like playing for story sometimes.

After all day at work i don’t want to rage at my leisure time.

My look on games changed over the years….at first I played on easy because I wanted fun and not my ass kicked.

Then I became a completionist and wanted a challenge.

Now it is enough to just experience the world again without major struggles and the necessity to collect all legendary flowers of Baba Yaga.

I play on hard sometimes, but if it isn’t fun I have no problem to dial it back.

The game is for me to enjoy not an additional chore in my life.

You bought the game and have the right to play it however you want.

To those friends I say, “just be grateful that you have a choice. Back in the day I’d have given anything to play NES Teenage Mutant Ninja Turtles on easy mode”

These days I play on whatever difficulty isn’t going to give me ptsd flashbacks to that seaweed stuff in the dam level.

Buncha fu*king basement sociopaths living out their “Black Sails” fantasies while mom cooks up the tendies.

See, I usually play it on the hardest setting I can handle so it’s more realistic.

I mean in fc3 you will die in a single shot if you are on the hardest difficulty, so you can’t just run in and spray Willy Nilly.

You have to do missions stealthily and plan your attacks.

I mean he’s wearing shorts and a teeshirt with 0 combat experience.

He’s not going to be bulletproof!

Yeah what is WITH this game?

My buddies and I are having a blast playing, and we’re super chill and polite, but man 95% of the people we meet are the sweatiest f*cking tryhards I’ve ever met.

Like, I’m not saying they’re trash-talking or something, I can handle that.

Increases in difficulty are only fun when they increase… well, the difficulty.

But in shooters it tends to just mean you give less damage, take more damage, have less HP, and enemies have more HP.

I mean yes, this is technically harder, but was the game designed to be played at that difficulty?

Can you strategize your way out of it?

It’s more difficult by the layman word “difficult” but in the context of game design I don’t like calling that sort of thing an increase in difficulty.

There may be a better term I’m not aware of.

Lots of folks play it for the naval pvp part of the game and prefer getting their treasure that way.

I play normal bc i believe it’s how the game was meant to be played, not some ultra mega super hard difficulty that sucks the joy out of the plot.

I don’t understand why some are so anti easy modes. Some people want to play a game that they’ve been looking forward to but dont have the time to “get good”. What is the harm in making your favorite series more accessible, which creates more sales, which can help ensure a better future for that series while keeping in game costs low (not every publisher would follow that logic of course).

I dont speak for everyone, but when I find a game, film, or show that I love I want to share it with others. I LOVE the Deus Ex series but my good friend just can’t play stealth games very well. I got him to play Human Revolution on the easiest mode and he eventually beat it and really liked. Hes currently playing my copy of Mankind Divided

It’s been awesome to talk about one of my favorites series with a close friend which wouldn’t had happened if he had to “get good” to do so because his wife and 2 kids didn’t give a f*ck how good he is at video games, I’ve asked.

No one is trying to take away your platinum trophies or in game achievements, playing games competitively is awesome but not to everyone. Some just want to play a video game they think looks fun.

The whole controversy started because there was a fear of inaccurate review ratings.

For example, if a reviewer is awful at playing Dark Souls, making an easy mode for him will absolutely mess with his review of the game.
Suddenly, he’s not reviewing the Dark souls everybody knows and loves, he’s now playing a slow paced hack n slash game. Altering his review score and perception of what the game was designed to be.

I play most games in easy mode, and mod in grind-removing things when I can (crafting supplies and gold in DAI, or just outright using commands in Skyrim for the house building supplies for example). I’ve got a family, a full time job, and all the crap that has to get done because of it, and no time or inclination to grind elfroot or iron once I get to play my games. Plus it’s single player, so I’m the only one effected by it.

I’ve started playing Satisfactory recently (love it so much!), and the only thing I really want is a peaceful mode so that the animals stop kicking my ass when I go exploring. But I understand that lots of folks like combat, so having combat mode as default with a peaceful mode as an option for folks like me would be great.

Doesn’t make me less of a gamer though. Gatekeeping over what difficulty you play the game on reminds me of gatekeeping being a “real” gamer based on how much you enjoy min/maxing the game/character.

I agree with OP here! You do you, man.