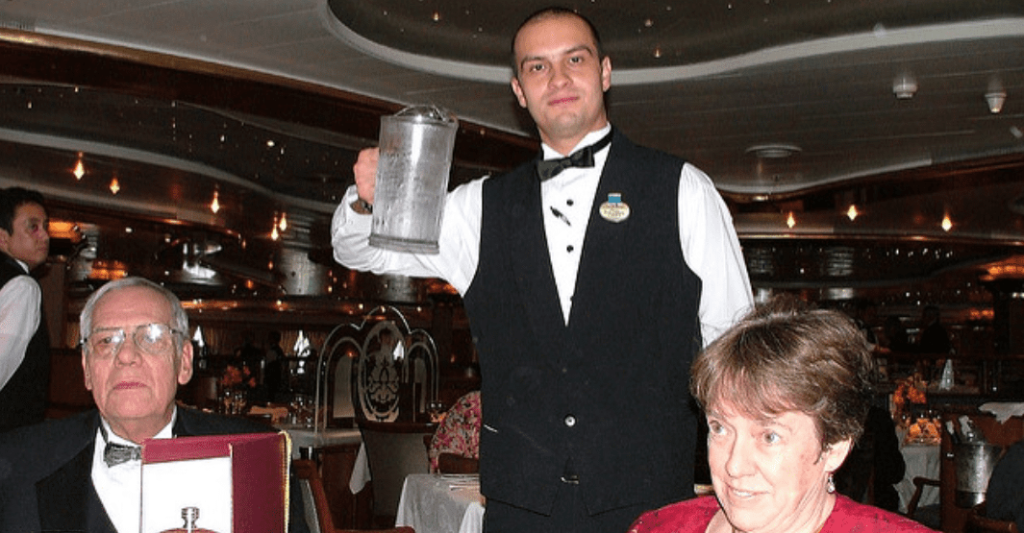 Waiters see it all. And they hear it all, too. All kinds of weird and wacky conversations from their many, many tables.

Here are some of the weirdest that AskReddit users shared.

“I saw a mother take her knife and with the flat part of it, whack the hand of her 2 year-old child because she was drawing something with her left hand. She yelled at her “No, use your right hand. Good girls don’t write with their left hand.”

This was as I was standing there taking their order and writing with my left hand.”

“My favorite was a group of nurses. Pouring waters as one says the sentence “So a guy came in for an adult circumcision yesterday…”

Never ask a nurse about their day. It was worse than yours.”

“I approached a table with a family of five to take their order.

Two adults and three kids from about 5 to 10 or so. One of the kid starts to say something and the father cuts him off by saying “Don’t say another word Peter. Nobody says a thing until Princess Mommy makes up her mind and decides what she wants for dinner.”

Followed by long awkward silence and me leaving.”

“Party of five or six, it’s a group of friends having dinner. In walks a clown. Clown starts randomly walking around the restaurant doing balloon animals for kids and stuff like that.

I have no idea what is going on. We definitely didn’t hire this guy.

He walks over to the table of 5 or 6 and selects a man from the table to perform a magic trick for. He did the trick, a small flash of smoke and fire happens and then magically there is an engagement ring on a rope. The man takes the ring and the woman gets on her knees and asks the man to marry her. The man says no, tells her to get up and they continue dinner.

This table now has the attention of the entire restaurant (like 300-400 people on our busiest night). Everybody just turned away and started awkwardly eating like nothing happened.”

I’m walking down a long hallway carrying a tray of food. A kid comes running from a perpendicular hallway and run face first into the wall without putting his hands up. He starts crying.

The dad walks behind him very calmly and kneels down and says, “Buddy, you just can’t go running into walls.”

I sidled by and politely told her that wasn’t the case.”

“My Mom and I went to a restaurant in a town we were visiting, and we were seated close by a family just sitting down to dinner. As soon as they sat down, the waitress asked if they wanted a drink. Dad and Mom ordered wine and son looks at waitress and then blurts out to his parents “I’m gay.”

Waitress leaves. Parents look at their son and then look at each other. Mom then asks Dad what he is thinking of having to eat. Son again exclaims “I’m gay.” Parents look at him deadpan and say in unison, “we know”. Then waitress came and took our orders and I didn’t hear what happened next. But they stayed and enjoyed their meal and seemed to be fine with each other.”

I was delivering food to a large table that looked like they were on a family reunion vacation when I overheard a grandpa asking one of the younger (12 or 13?) grandchildren if he they had fun that day.

The kid responded with “F*ck you grandpa I can’t wait until you die.”.

I almost dropped all the plates in shock.

9. Not that kind of place

“I overheard a guy on a date, at the table next to ours, trying to impress the girl by saying that he loved swing dancing, and that maybe they should check out that “Swinging Richards” place sometime.

(It’s of the male nudity variety).”

“I overheard a customer talking about someone “coming and being so much fun”. I assumed she was pregnant because she seemed to be showing a bit. I decided mid way through the dinner to congratulate her on being pregnant. To my horror she said “I am not pregnant”.

I felt horrible. I told my manager who comped their meals and I hid in the back for the rest of their dinner. Push comes to shove she refused to let the manager comp her meal and left me a $20 tip with a note that said “I was kidding I’m due in July.” “

“I work in a pretty big tourist beach town, an older couple comes in one night, super nice.

They were there for a while, pretty much until close. I come by to ask if they need anything. “Actually, my wife and I were talking, and since it’s our last night here, we wanted to know if you would be interested in joining us back at our hotel room?”

I smiled, told them thanks but no thanks, but have a nice rest of your trip.

They left me a hefty tip and went on their way.”

“I waited tables at a college town Ruby Tuesday. One not, we had a bunch of frat guys come in, all sitting at the same table. They ordered food and several beers. Everything started out fine, but after about 20 minutes, they were getting loud and dropping some f bombs and other things unnecessary in a family restaurant.

I could tell several of the other tables were slightly annoyed and a little uncomfortable, so I finally went over the frat guys and reminded them that this was a family restaurant and they were really going to have to tone it down.

One of the frat boys stood up, looked me straight in the face and sneered, “And if we don’t tone it down, what are you gonna do about it?”

I was not prepared with an answer, but then I heard a voice behind me.

“I don’t know what he’s gonna do about it, but if you keep this up, I’m gonna come over there and kick all of your butts”

I turn around and there’s this giant man out to enjoy a quiet dinner with his wife. His wife now looks amused at the prospect of her husband wiping the floor with a couple of drunk frat guys.

Anyway, frat guys quickly collect their checks, pay and get out. I comped dessert for the couple and it was a great night after all.”

“One time when delivering drinks to a guy and his wife who were sitting across the table from each other I accidentally caught a glimpse of the man’s phone.

The content was very inappropriate. He knew he was caught.

I kept my composure completely and didn’t skip a beat.

“I’ve waited tables at a mid to upscale level family owned restaurants part time for 9 years. Its located in a suburban area of a Midwest city so we have a mix of rural and urban folks.

One night, I waited on a couple that looked more like the young hip urban crowd. They looked at the wine list for a good five minutes and when I came back, she asks me “what do the numbers by the price per glass mean” I thought this was a joke so I replied “the price per bottle of course”. She stared at me for a moment, calmly closes the menu, and slaps her partner in the face with the menu screaming “WE’RE SO UNSOPHISTICATED!!! YOU NEED TO TAKE ME OUT MORE”.

I audibly laughed I just couldn’t help it. He however didn’t find it funny.”

“We had a couple who would come in regularly and always asked to be seated in my coworker’s section. They were probably in their 60s and were always really affectionate and cute with each other. My coworker would joke around with them all the time.

One day the man came in with a different woman than usual, and my coworker jokingly told him “ooooh, you’re in trouble. I’m going to tell your wife you were here with another woman.”

Woman said “Excuse me? I am his wife. Who has he been coming here with?” Dead awkward silence while she death-glares at her extremely uncomfortable-looking husband.

My coworker just turned around and walked away.”

Okay, those were REALLY weird… but have you ever heard anything like this?

If so, please let us know in the comments! We love to read your stories!