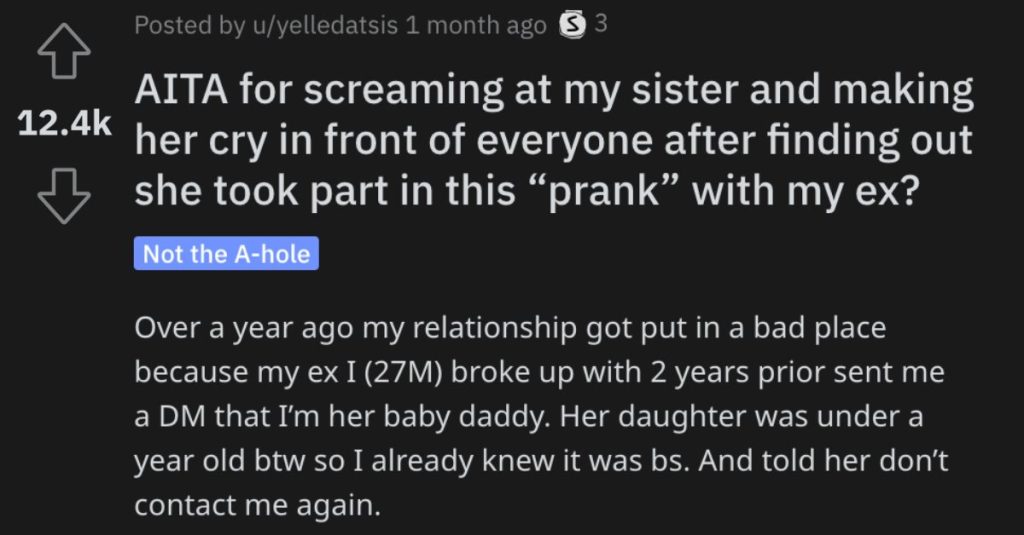 Was He Wrong for Screaming at His Sister Because of a Prank She Pulled Off With His Ex? People Responded.

Well, this sure doesn’t sound funny…at all.

But the “Am I the A**hole?” page on Reddit is the spot where people can air their grievances and ask their fellow humans if they went too far.

Read this one and see what you think…

AITA for screaming at my sister and making her cry in front of everyone after finding out she took part in this “prank” with my ex?

“Over a year ago my relationship got put in a bad place because my ex I (27M) broke up with 2 years prior sent me a DM that I’m her baby daddy. Her daughter was under a year old btw so I already knew it was bs. And told her don’t contact me again.

She found my girlfriend’s (27f) insta and then started sending her messages too that this is my daughter, she’s sorry for being involved with me knowing I was in a relationship with my GF but since I’m refusing to take responsibility she didn’t know who else to reach out to. Trying to make herself seem all genuine.

My girlfriend was sent fake screenshots that were supposedly from me then also the one I actually sent her about leaving me alone because that’s not my baby. Around this time my girlfriend was 6 months pregnant. So the stress/hormones of that, plus the info she gave her: the times we supposedly met up after telling my girlfriend I’m working late matches up because those were actually nights I had to work late, all that freaked her out and she really did start having doubts.

It got to the point where my girlfriend was really scared and confused and she went to go stay at her parents for a few days. I was so scared I was gonna lose my family THEN my ex apologized when she heard my girlfriend wasn’t staying at our apartment. She just wanted to mess with us a little because she was still bitter I dumped her but she didn’t mean for it to go that far.

My girlfriend came back, it took some time to come back from that but we have our son now who’s 7 months and we’re happier than ever. My sister (25f) told me about this last weekend when we were at our parents. She got a lil tipsy from the mimosas and when we were joking about all our old embarrassing stories she just blurted it out but she thought it was okay to talk about it now since me and my girlfriend are fine.

I kept asking her why the hell would she do something like that. Straight up arguing right there in front of my family. She says she was just being stupid and bored since she wasn’t working and like my ex, didn’t realize it would get that bad which is why they stopped it.

But obviously my ex didn’t rat on my sister. I called my sister a stupid b**ch for almost wrecking my relationship, and what that put my GF thru. My sister started crying. And this is why she didn’t say anything because it might get this reaction. She only said something now because she was embarrassed and now we’re in a good place so she doesn’t know why I’m so mad about it. It was a whole thing, my sister cried in the bathroom and wouldn’t come out. I went home early to be with my girlfriend and son.

They all say I behaved like an a**hole when my sister decided to come clean and owe her an apology for my overreaction just like she owed me one. Was my reaction warranted though or was it actually an overreaction. I’m still mad about it.

This person said he’s NTA and that this went way beyond a prank. 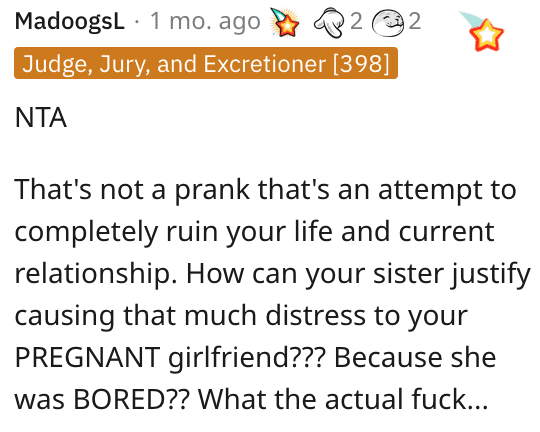 Another Reddit user brought up a very scary scenario… 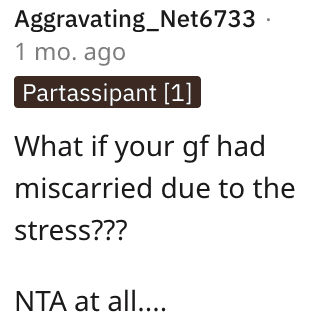 And this individual said that this guy should be DONE with his sister after this.