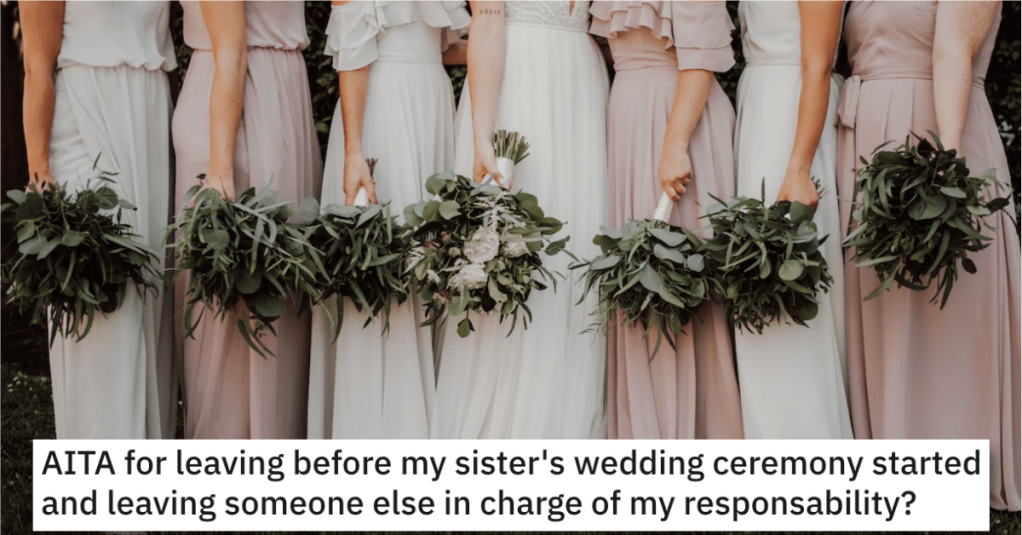 Was She Wrong for Leaving Her Sister’s Wedding Early? People Shared Their Thoughts.

What do you think are acceptable excuses for leaving a wedding early?

What if it’s your sister’s wedding?

Yeah, that’s a tough one…

So is this woman an a**hole for leaving her sister’s wedding early?

Check out this story and let us know what you think.

AITA for leaving before my sister’s wedding ceremony started and leaving someone else in charge of my responsibility?

“My (F) sister got married on Friday.

She and I are twins, so we are very close and best friends. She is child-free and I have 2 kids (3M and 1M).

Obviously she loves her nephews, she never mistreated them, but she is not a person who would accept being a babysitter for a day. She has never offered to help with anything, though it’s her choice and I respect it.

Not surprisingly, her marriage was child-free even for the family. She asked me to be her MOH and I accepted.

I was responsible for a few things at the ceremony and party, nothing complex, but I asked another bridesmaid for help, so she was also on top of everything.

My children stayed with my in-laws while my husband and I went to the wedding.

About 10 minutes before everything started (I was there for 2 hours), my in-laws called saying that my youngest hit his head while playing with my oldest and that they were taking him to the hospital.

I despaired, even though they said he was conscious, my heart was not at peace nor my husband’s, so we decided to go to the hospital. I talked to the bridesmaid and explained everything I had to do, she accepted and when it was time to talk to my sister, she had a meltdown saying that I couldn’t go at the most important moment in her life and if I was choosing him instead her. I got really irritated and said “Yes, I choose my son in the hospital”. I left with her cursing me.

My son is fine, but he got 2 stitches, without any internal trauma (they did exams), but we only left the hospital the other day, because they preferred to put him under observation because he,s very young.

I preferred to stay away from my cell phone just like my husband.

When I got home, several calls from different people and I answered when I saw my sister’s.

She asked before how my son was and when she learned that it was a minor injury, she started screaming saying that I abandoned her at the most important moment in her life and that she was without a family in her own marriage (no parents and grandparents).

I left my responsibilities to a person who did everything wrong and caused an embarrassment and to make matters worse, I didn’t even want to show up since my husband could stay in the hospital while I would at least share this moment with her.

She called me several names until my husband took the cell phone out of my hand and told her to f**k off.

I really could have at least gone to the party, but I wasn’t going to make it knowing my baby is in the hospital. I can’t help but feel bad for my sister.

This person said she’s NTA but her sister sure is. 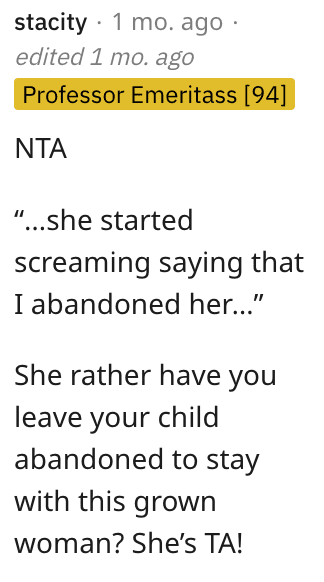 And this individual also said she’s NTA and that she might want to think about shutting her sister out completely. 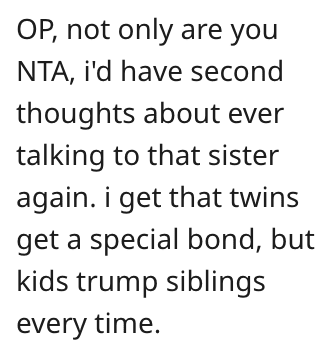 Another Reddit user said she’s NTA and that this is what can happen if you make a wedding child-free. 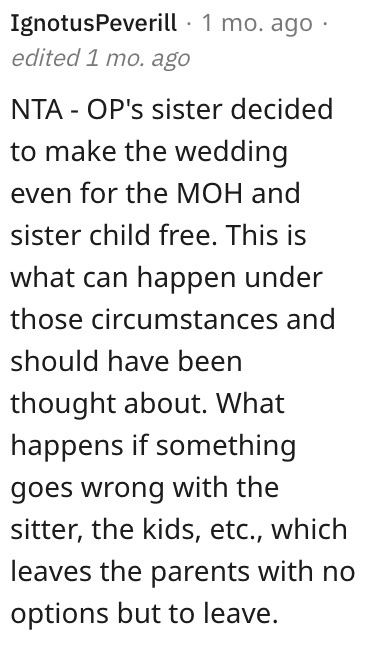