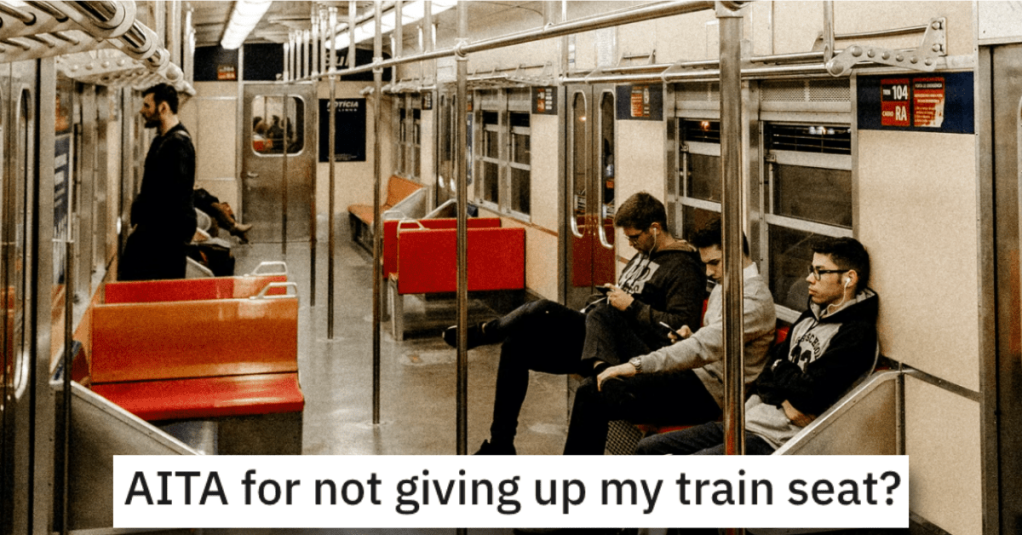 Was This Person Wrong for Not Giving up Their Seat on a Train? People Responded.

I’m the kind of person who thinks you should probably ALWAYS give up your seat on public transit…but this story is a little bit different, so let’s not jump to conclusions, okay?

Check out this story from Reddit’s “Am I the A**hole?” page and see if you think this person was wrong…

We’ll see you in the comments.

AITA for not giving up my train seat?

“I had an incident on the train last week and it’s been bothering me since it happened. I’m wondering whether or not I was the a**hole. My family are split and the whole situation was upsetting and left me pretty shaken.

I was traveling down to visit my Uncle for new year who has been struggling with cancer and couldn’t spend time with the whole family during Christmas. I had to take the train with my two kids (ages 4 and 7) and it was a pretty last minute booking as we weren’t sure if me and the kids were going to be able to go.

It was about a 7 hour trip all around with about 4 of that on the train, and my kids were really tired and everything was a bit overwhelming so I didn’t see a problem with sitting in the seats marked as reserved whilst the train was still pretty empty.

The journey was quiet. We got to have a bit of rest and have a few drinks and some food which the kids appreciated since it was such a long day for them. When people came on looking for their seats I stayed quiet and hoped their seats weren’t ours.

A man walked up and down the train a few times before starting to ask people if they could move (so he could see the numbers on the headrests), which I thought was pretty rude when he could easily have just sat in another seat for now (the train wasn’t that full)

Anyway it turned out that my daughter was sitting in the seat this guy had reserved and when he aggressively said to her that she was in his seat she kind of looked a bit startled and looked to me. I had been watching this guy be rude to other passengers and I was pretty angry that he’d speak to my daughter the same way, rather than look to me and ask politely.

She’s seven and is obviously with me. I told her to stay where she was as there weren’t any other seats she could move to that were next to me and suggested he sit somewhere else as there were more than a few seats dotted around.

He goes off muttering and I assumed he was going to sit down but he came back a few minutes later with a member of staff and was shouting at this point how we had stolen his seats that he’d paid money for and we weren’t even supposed to be on the train.

The woman checked our tickets and I explained to her that we were just tired and didn’t think it would have been a problem to sit in the seats whilst the train wasn’t full. To his fury the woman told us not to worry and also suggested that he sit elsewhere.

He started shouting about how we had stolen his seat and children weren’t above the law. Long story short he was told that he needed to get off the train at the next stop as he wasn’t welcome on the service. At this point both of my kids were pretty shaken and I regretted the whole journey but wasn’t sure what I could even do at this point.

Was I the a**hole here for creating this situation, part of me thinks this man was just crazy and was going to cause an argument with somebody even if it wasn’t us but I’m not sure?”

This reader said that this person was definitely the a**hole in this situation. 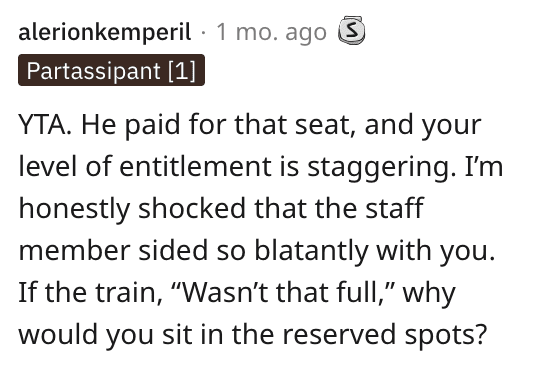 And another individual made a very clear about what happened.

This Reddit user agreed that this person was the a**hole and added that they’re a HUGE one. 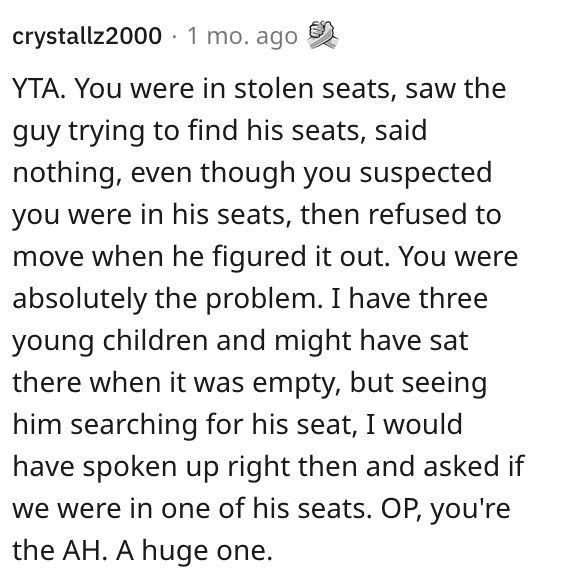