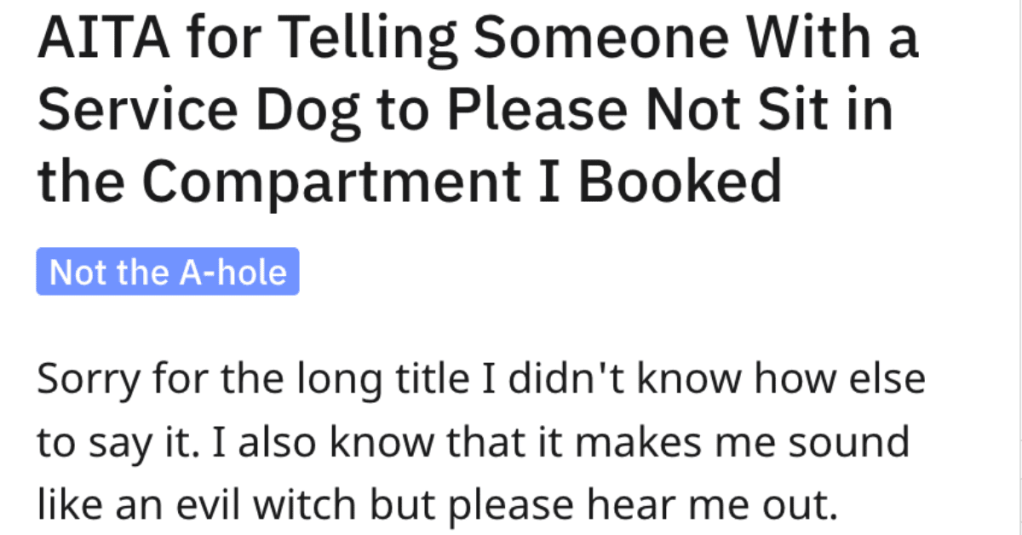 Was This Teenager Justified In Calling Her Brother-In-Law “Useless?”

There is no doubt in anyone’s mind that parenting is a tough gig. The hours stink, the stress levels are through the roof, and there’s actually zero pay other than sleep deprivation and emotional damage (and sure, also emotional fulfillment), and we all need a break sometimes.

That said, there are way too many women in this world who are doing it all while their husbands do nothing, so hey, maybe it’s time someone started calling those dudes out.

This girl is only 17, but a big age gap means she regularly sits for her older sister, who repays her with shopping sprees and random gifts (and OP loves her nieces/nephews).

She was happy to run over one day when her sister called and said she needed help watching the kids because of an emergency at work.

When OP arrived, though, her brother-in-law was home. He was gaming, and her sister said he didn’t want to “babysit” on his day off.

My (17F) sister (34F) called me saying that her work had an emergency and she needs to get there ASAP and needed me to watch her kids because “no one else can”.

I rushed over there just to find her husband locked in his game room playing video games. I asked her why she called me over if he was home and she said he didn’t want to “babysit” because it was his only day off.

I got a few questions of “does she pay you?” Not exactly, but she will randomly take me on expensive shopping sprees and will regularly buy things from my Amazon wishlist instead, and I have no problem with this arrangement.

I really love those kids and don’t have an issue babysitting them, I love hanging out with them.

OP dove in, having fun with the kiddos, until the baby had a blowout and the older ones wanted a snack at the same time (because kids). She sent them to ask their dad for a snack but he sent them right back.

Sister left, and I started hanging with the kids. I was changing the baby’s diaper and the other kids wanted a snack, I told them to go ask their dad to make them a snack since the baby had a blow out and it was going to take my awhile to clean him up.

Well their dad sent them back upstairs and told them to ask me again.

When he emerged to get himself some food later, he told OP not to let the kids bother him on his day off – and OP had enough.

After cleaning the baby up I made the kids a snack and their dad came out to eat and told me not to let the kids interrupt him on his day off. (By the way, he works part time from home, 6 days a week).

I kind of snapped at him and told him it was MY day off too and that he’s a useless f**king father and husband if his wife has to rely on her teenage sister rather than her own husband.

They got into an argument in which she pretty much told it like it was and he made whiny excuses about how hard his life is, until he got sick of it and kicked her out.

…and called his wife to make her come home and watch the kids.

He ended up kicking me out and apparently my sister was forced to come home because he told her she needed to figure it out since I’m her sister.

I did not yell at him in front of his kids. It was a private conversation.

Everyone but her dad thinks she was in the wrong, and her sister even thinks she should apologize to the brother-in-law, but OP doesn’t like him and never has.

I feel like I may be the asshole because my sister is mad at me, her husband is mad at me, my mom is mad at me for causing drama, but my dad thinks it’s funny and agrees with me. I definitely didn’t need to call him names but I just hate this guy so much.

We have argued about things in the past as well so we already don’t have a great relationship. My sister is saying I need to apologize to him and he is threatening to never let me into the kids lives if I keep disrespecting him.

Should she apologize? Let’s hear what advice Reddit has for her in the comments!

The top comment says what we’re all thinking, which is that the sister could use a reality check of her own here. 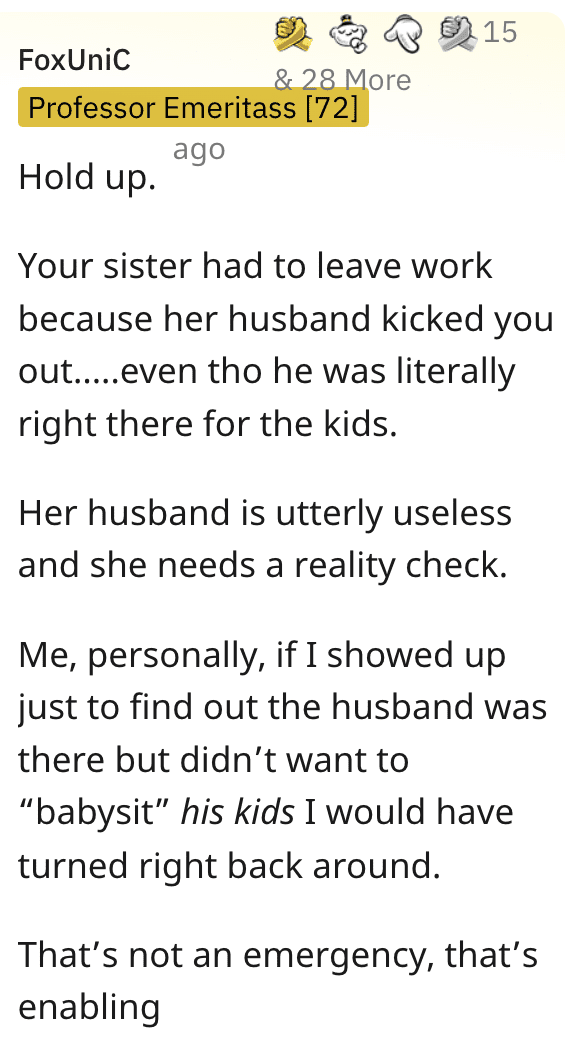 We think both sisters and those kids deserve better.

Louder for the people in the back. 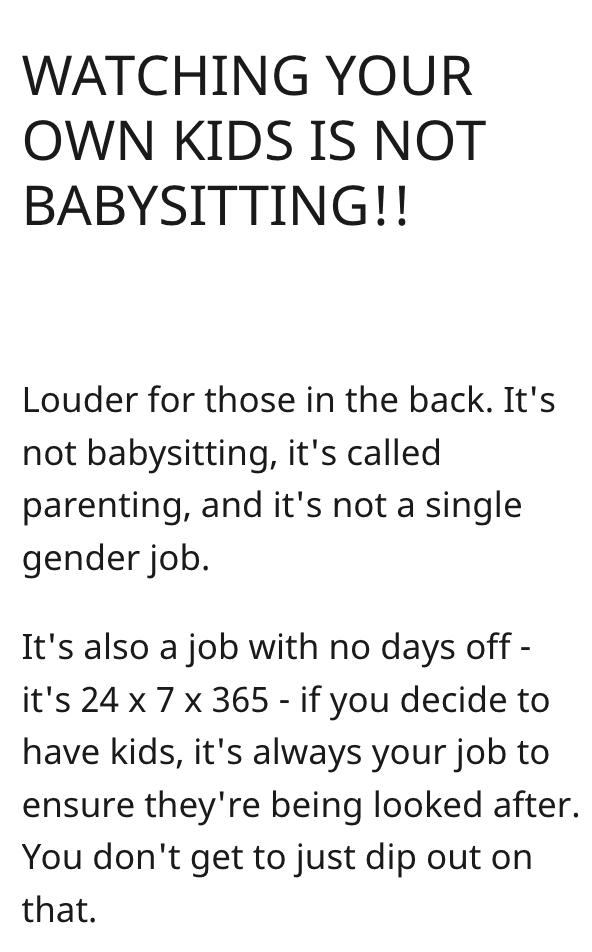 No mother would dare say something like this, not ever. 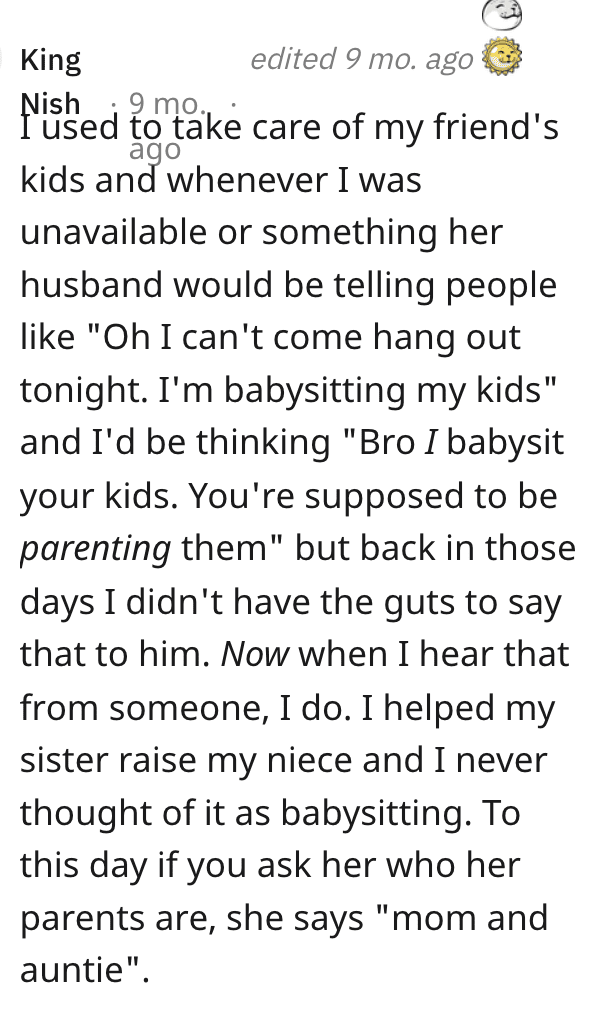 I mean sometimes the truth hurts. 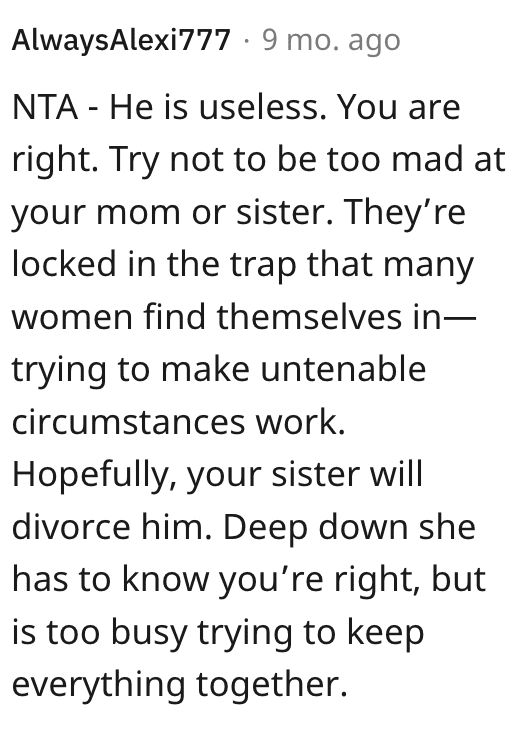 There are just too many dudes out there getting away with this crap on a daily basis, and women who put up with it for any number of reasons.

Would you put up with this from your spouse? Tell us how you would handle him in the comments!