I’m not an expert, but I feel like there’s really no way to hate the movie National Treasure. It’s a silly premise, sure, and the dialogue leaves something to be desired, but the leads have good chemistry and the sidekick character has comic timing for days.

Plus, it’s inspired these 20 posts, and really, that makes it an instant classic.

To Disney President Bob Iger: PLEASE MAKE 'NATIONAL TREASURE 3' ASAP. THE LAST ONE WAS CALLED 'THE BOOK OF SECRETS' BUT WE DIDN'T ACTUALLY GET TO SEE INSIDE THE ACTUAL BOOK! WE NEED TO EXPLORE THE BOOK AND WE NEED A THIRD MOVIE. ALSO, THIS WOULD MEAN MORE NIC CAGE. PLEASE, SIR.

There are two types of people in this world….Those who enjoy the National Treasure movies with Nicholas Cage and those who are my mortal enemies.

My perfect date? We meet at a gala. I am wearing a black gown and you’re dressed in a tuxedo. After we dance, you leave suddenly. I follow you outside. You’ve stolen the Declaration of Independence. You’re Nicholas Cage. This is National Treasure

16. Riley Poole is the only one with common sense, here, and we love him for it.

look if you’re gonna invite someone over to “watch a movie” you better pick a movie no one gives a shit about. once a guy picked “National Treasure” and guess what we did? watched the entire movie bc it’s flame. guess what we did not do.

12. It can say anything you want, really.

*me as nick cage in national treasure movie
Me:"The back of the declaration has a message on it…it says
Floop is a madman help us save us"

Watching National Treasure with my son, and it JUST dawned on me that Ned Stark tried to steal the Declaration of Independence…

Guess he kinda had it coming.

While we're at it, can we also dispose of this fiction that National Treasure isn't one of the best movies ever made.

8. With responses like that, you could have been IN the movies!

7. Isn’t life great when it comes full circle like that?

Sometimes you realize that what you’re searching for has been there all along. For example, all that time in National Treasure we watched Nicolas Cage try to steal the Declaration of Independence only to find that the movie itself was the only national treasure we needed. 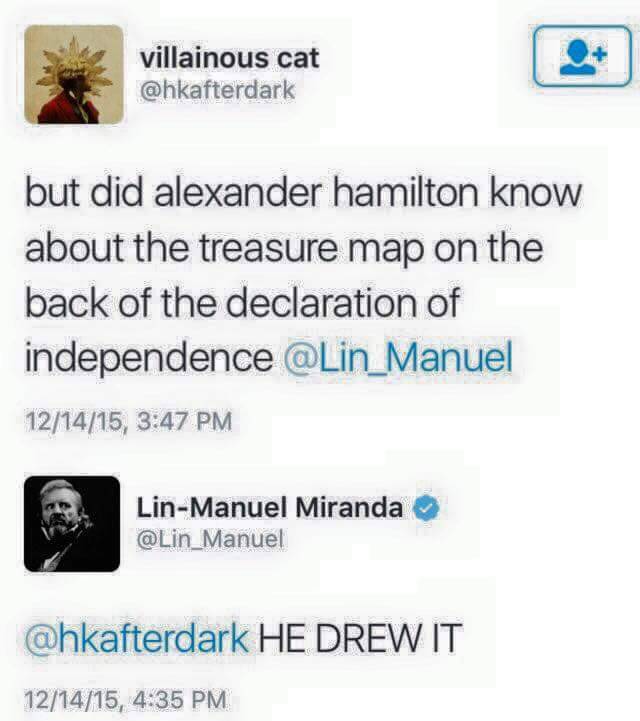 4. It really was real all the time.

3.There’s no way around it.

1. I would like to read this essay now, please.

They separate in the sequel. Only another, even higher-stakes treasure hunt can reunite them. In this essay, I will argue that the real National Treasures were the friends we made along the way

I’m off for a rewatch, because yeah. I love it.

Do you like this movie? Why or why not? We’d love to hear about it in the comments!