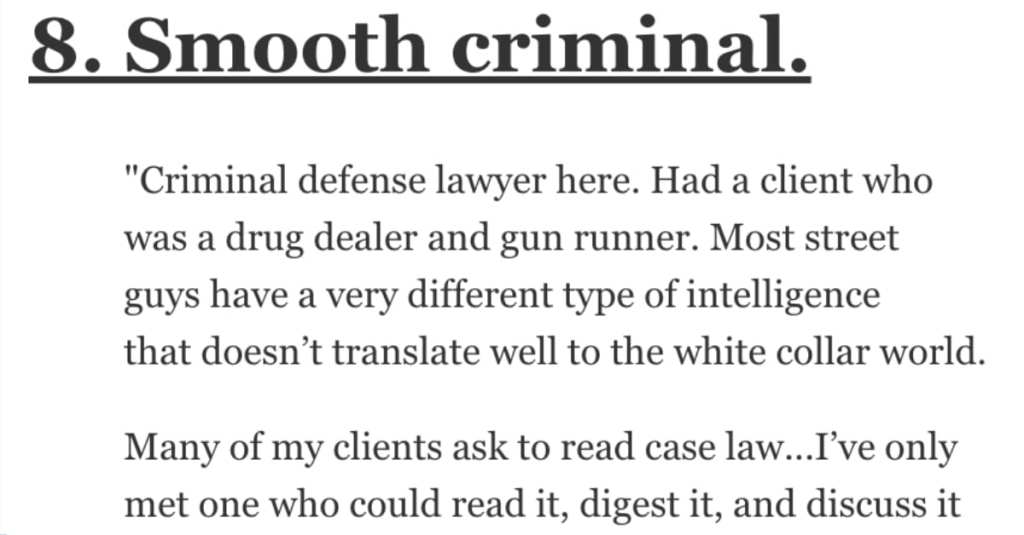 What Are Your Experiences With Really Smart People Who Didn’t Realize It? People Shared Their Stories.

Some people just don’t know how brilliant they are.

Maybe they didn’t have supportive family and friends or maybe they just really don’t have any clue whatsoever that they are really darn smart.

Have you ever been around people who don’t know how smart they are?

Folks on AskReddit shared their stories.

“We have a paid summer internship program for juniors and seniors pursuing construction management degrees.

5 years ago we had a young woman who came in to the program in her junior year. She was very tiny in stature, and very quiet, but we soon learned – giant in intellect and loud where it counted.

After each period, I received a call, praising her ingenuity and ability to adapt and improvise in any situation.

At the end of the internship, we have a Plus/Delta review of their performance, and based on that review, we make a determination on whether to offer them a place the following summer. In the case of a senior, we determine if we want to extend them a full-time employment offer.

Every review she received from each department all said the same thing: “HIRE HER NOW”.

We extended an offer for a salaried position, part-time, from that point through her senior year, along with tuition reimbursement.

This young lady still amazes everyone every single day. She’s 25 years old, making an amazing salary and absolutely dominating any project she’s given. If she doesn’t know it today – she’ll practically be an expert tomorrow.

I can see her having my job one day (Operations Director). Hopefully, it’s AFTER I retire.”

“My dad grew up believing he was dumb and would never amount to anything. His teachers all hated him and the first time he went to university he was kicked out.

Around the same time as I started university, my mum finally convinced him to try again to get a higher education himself. He’s often said that he’s too stupid to go back to school, but he speaks about six languages fluently, has so many new interesting history facts that whenever we watch any movie we always have to pause at least four times for a lengthy discussion about it, and he remembers more book quotes than anyone I’ve ever met.

He grew up in communist Hungary and East Germany, and he has since then climbed mountains and been scuba diving in the Atlantic among a bunch of other adventures. Whatever the discussion, he’s got a story to tell. He’s the coolest dad ever, but for as long as I can remember my family has struggled financially since he couldn’t get a job that paid enough.

It makes me so happy that he’s finally reaching his full potential now at 51 years old, and we’re all super proud of him. He dreams of being a teacher one day. He will the best teacher his future students could ever wish for.”

“People who are great teachers without actually being a teacher.

I’ve always thought people who can teach others are incredibly smart because they’re aware enough of what they know to present it to others in such a way they can understand it.

The guy I used to work with was a phenomenal teacher of all things paints, powder coating and colour matching/blending. He had a real passion for it and it showed in the manner in which he taught and demonstrated what he was talking about.

In saying that, he was also very highly strung and had some mental health issues that held him back from doing great things and so believed he was an idiot. He wasn’t, but no amount of telling him would help.”

“I Had a kid in my class that never took anything seriously, skipped class, brought al**hol to class and did numerous other things.

You name it he probably did it. But man, that mf knew his s**t whenever he paid attention. He understood things when other people were struggling to learn whatever was being taught that day (math, science, English, reading etc).

It makes me a little sad because he was always a trouble maker, but deep down I knew that he is/was very smart and was capable of doing good in school.

He just never chose to do it, or generally just didn’t care at this point. I think he got involved with the wrong crowd early on unfortunately.”

“Former coworker of mine.

He came to Germany as a refugee in his young teenage years, had trouble in school due to language barrier, poor support, tough family situation, typical refugee problems.

Then he was unemployed and Jobcenter (part of German welfare dealing with unemployment) sent him to the security company I worked at that time because conitions of employment are almost nonexistent in this field.

When he was on my team for an event I (as team leader) had to show him the ropes. The event lasted ten consecutive nights and we faced several different challenges that were part of the job. Every now and then he had a genius idea how to solve the particular problem.

The following year I got him on my team whenever I could, trained him and when I left the company he inherited my position as team leader.

I don’t actually know whether he knew about how smart he is, but he was so insecure in the beginning I boldly assume he didn’t.”

“My mother. She was raised in a poor abusive family and left school very early to escape.

Even now she’ll say how she is uneducated – which is true, but she ain’t stupid. She raised a bunch of us without much money and was always resourceful and canny at making ends meet. She can do fairly complicated math in her head, does extensive research before making large purchases, forwards me screenshots of quite sophisticated scam emails and tells me why they’re fake.

She’s 78 now and has always embraced new tech. Has no trouble using her smart phone or her PC – she even troubleshoots for her neighbours. She still lives in the same poverty stricken area we grew up in and is often helping her neighbours advocate for themselves, writing letters, telling them who to contact and what to say.

I wonder what she could have done if she had the opportunities she made d**n sure we had.”

“As a teen, I worked for a video rental place.

My manager spoke five languages and did all the accounts without the need of a calculator. I asked him what was he just a manager at a movie rental place, he could be making a lot of money doing anything else.

He told me “making less money is the price of my happiness.”

Always stuck with me.”

“Criminal defense lawyer here. Had a client who was a drug dealer and gun runner.

Most street guys have a very different type of intelligence that doesn’t translate well to the white collar world.

Many of my clients ask to read case law…I’ve only met one who could read it, digest it, and discuss it intelligently with me. This guy.

He’d do his own research from the jail, which isn’t uncommon, but this guy did it well and would actually send me relevant cases that were helpful to the issues in his case… and when I explained to him why some were not helpful, he got it, asked good questions, and used that discussion to inform future research.

There are a lot of inmates who consider themselves “jailhouse lawyers.” This guy was smart enough to actually be one.

I think about him a lot and wonder what his life would have been like if he was fortunate enough to be afforded with the same opportunities during childhood that I enjoyed.”

“In my first year of college I sat next to a quiet girl who never thought of herself as smart. While everyone else was loud about what they know and act like they’re top of the class, when they’re really not.

She never showed off her knowledge. We just graduated this year, 4th year, and she was honoured the university medal for her thesis, #1 student in almost 400 students. But I bet you, she still doesn’t think of herself as especially intelligent.”

We have a variety of specialists in my family from medicine to art to education to software. We go around the table at family gatherings and try to stump him with questions. He’s never gotten one wrong to date.

He just knows everything about everything. Obviously has a photographic memory, reads voraciously, and delivers car parts for a living.”

If so, tell us your stories in the comments. Thanks!