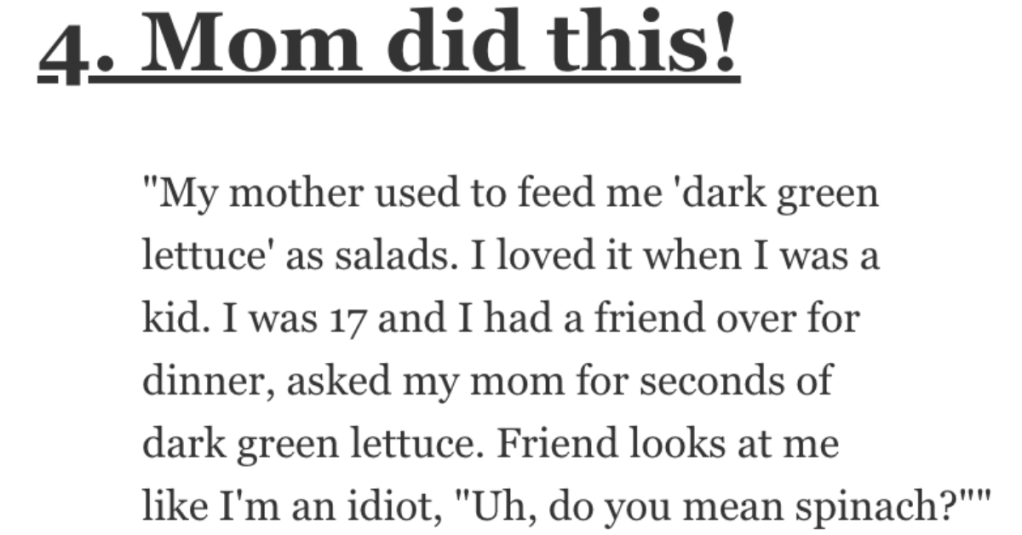 What Basic Fact Did You Find Out Embarrassingly Late in Life? People Spoke Up.

We all have those moments…

I’m talking about when we find out about something WAY later than everyone else.

It’s never pretty and it’s always embarrassing, but we’ve all been there.

What basic fact did you find out way too late in life?

People on AskReddit spoke up.

“I lived in a desert most of my life. No snow.

Before my recent experience, I had spent maybe a total of 5 days of my life in snow, and the snow I was in was incredibly light. Because of this I always pictured snow as eternally white and ethereal, like in all the cartoons I’d watched as a kid.

Went to spend time with my partner’s family back in the Midwest in early February. I was absolutely enchanted on my first day of the two week stint. Then I watched what happened as the snow stayed around. And I got to see black ice and the nasty gray/brown snow blocks on the side of the road.

I suppose I should have KNOWN snow got dirty and tracked over and nasty but I didn’t. Robbed the childhood wonder and whimsy right from under my nose.”

“I was baking a cake in my dorm for my 19th birthday. My friends were running around and being loud so I yelled at them to stop because I didn’t want them to ruin the cake.

They looked at me like I had two heads so I had to explain that my siblings and I were always taught that making loud noises or running around a kitchen when something was baking would make it fall. I was surprised they had never learned that baking rule

Yeah turns out that was made up to stop kids from running and being loud for a couple hours when baking was being done. I called my mom up to ask her about it and both she and my grandma were just as shocked as I was to find out it’s a myth, so apparently at least 3 generations have believed and followed that rule”

“Not me, but in college my buddy asked me how to spell “smorning” because his phone didn’t recognize it as a word.

“My mother used to feed me ‘dark green lettuce’ as salads. I loved it when I was a kid.

I was 17 and I had a friend over for dinner, asked my mom for seconds of dark green lettuce.

Friend looks at me like I’m an idiot, “You mean spinach?””

“I was in my mid 30s before I realized that the ‘turn your head’ part of ‘turn your head and cough’ was so that you didn’t cough on the d**ned doctor.

I always thought it must’ve flexed some particular muscle or something, I don’t know. To my credit, I am a man and I don’t think I’ve ever had to do that.”

“One day I had a lightbulb moment. “Pickling is a process! You can pickle anything. SO WHAT ARE PICKLES?!?”

I was gonna blow so many minds with this question. Turns out, it’s cucumbers. And everyone on the planet knew that, except me.”

“Not me, but my father once stole into the woods during a family camping trip and put marshmallows on a bush, so it looked like they grew on it.

My sister made it to post secondary horticulture before she wised up.”

“My great-grandfather had half a pinkie on his left hand and always said it was because he liked to use it to sop up leftover pancake syrup and had worn it down to a nub. This made sense to me because I’d seen him do that plenty of times.

I was so embarrassed to be in college before I realized that was ridiculous and finally asked him what really happened. In reality, he and my uncle had been working in their blacksmith shop, and my uncle accidentally brought a sledgehammer down on his pinkie.

He didn’t want to traumatize me with the truth as a kid, but by the time I asked, I was more than old enough to handle it.”

“As a kid I used to think the Black Market was an actual place like a bazaar where all the criminals would regularly meet up.”

“When I was 4 or 5 my mother brought me home a balloon one day. Plain blue balloon with helium. I accidentally let it go and it flew away. Being little, I was devastated.

Later that night she comes back from somewhere and tells me she was at the gas station and miraculously, my balloon just came floating by. Being a kid I was thrilled and totally believed it.

So fast forward 20+ years. I’m on a date and we stop to get gas and we see a balloon floating by the gas station. Probably hadn’t thought of that story again in all that time.

So I start telling my date the story about how I had a balloon fly away and then my mother found the very same balloon at a gas station and then as I’m saying it out loud I realize (too late to not look like an idiot) that of course it wasn’t the same freaking balloon.

“I didn’t realize the handicap sign was a person in a wheelchair for a long time.

I had always thought it was just a neat little symbol, kind of like a treble clef.”

“I truly believed that for the longest time that hair grew from the ends of the strands, not from the scalp.

When I was 13 I asked my friend who had dyed her hair what she was going to do when the ends grew her natural colour.

Didn’t hear the end of it. My stupidity still pains me to this day.”

What basic fact did you learn late in life?