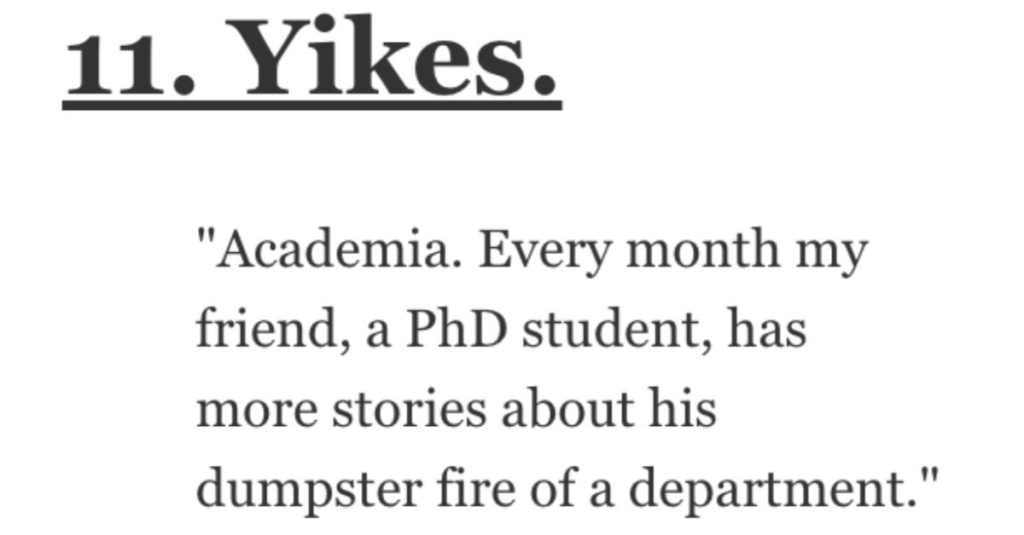 What Careers Seems to Attract a Lot of Folks Who Are Intellectually Deficient? People Responded.

Hmmm, this is kind of a tough question…

On one hand, we can probably come up with a lot of answers, but on the other hand…do we really want to offend anyone?

The answer to the second question is YES…yes, we do…

So let’s hear from AskReddit users about this!

“People become EMTs because it’s easy and so it attracts a lot of Rescue Randys who just want to be a hero… there’s nothing heroic about backboards and driving… trust me I did it.

I’ve spent my entire career in EMS at literally every level and there are a lot of great medics and EMTs but the community as a whole has some serious growing up to do.”

Seriously, if we had actual smart people in more positions, we’d be out of a job because we would have taken over the world by now.”

“F**king nurses. Holy s**t some of the women I work are just downright evil.

They’ll f**k you over 10 different ways before you uncover the first. The rumors, sabotage, and favoritism was something I had never experienced before in my male dominated jobs prior to becoming a nurse. Nursing is a solid middle class job with good pay.

I’ve worked in heavy equipment and warehousing. Men have it out and move on. Some of my closest work friends were people I couldn’t stand when I started, but we sorted it out. Female nurses on a power trip hold onto s**t forever.

They conveniently forget to relieve me at shift change or for lunches. Don’t bother calling them out unless you want a trip to the manager’s office. As soon as my healthcare project is fully funded, I’m done.

A hospital setting is toxic in general. If the docs and management aren’t a**sing you, some of your coworkers will.”

There are so many articles about how we have a shortage of workers in the field that places are churning out people with certificates in cybersecurity who know nothing about how computers, networks, or the internet works.

They can operate tools and respond to rote situations, though.

The amount of Karens/Kens that are able to rule and enforce dumba** laws and rules will always baffle my mind.”

“Usually any degree that “sounds smart” people are only drawn to it to say they study it. First one that comes to mind is Biomedical engineering.

And there’s also no job market for them without a higher degree. It is thee stereotypical sound smart but actually an idiot field.”

“I’m in corrections. It doesn’t feel like a real job half the time, some of my coworkers would be homeless without the state pretty much giving them the job.

Once you get into an admin role it starts to actually feel more like real work, with emails, and maybe some actual paperwork. Paramilitaristic academy dropouts won’t take those positions because they don’t get to spray offenders, and you need some experience beyond walking in circles and saying no.

Oh yeah, some corrections officers are legitimately mentally handicapped. Like, clinically diagnosed and have difficulty functioning day to day. One of these guys ran out count one night, and kept us on full site lockdown for 3 hours because he couldn’t figure out how to move offenders from housing units on our computer system.”

You would be surprised how many idiots start working in IT and don’t actually want to learn anything.

Sometimes I wonder how they even got the job.”

The barriers to entry aren’t as high as most people seem to think, and there are plenty of ways to succeed in the field without being a brainiac.”

Every month my friend, a PhD student, has more stories about his dumpster fire of a department.”

Some are great and a whole lot of others are problematic people who really need to work on themselves.”

Do you have anything to add to this?