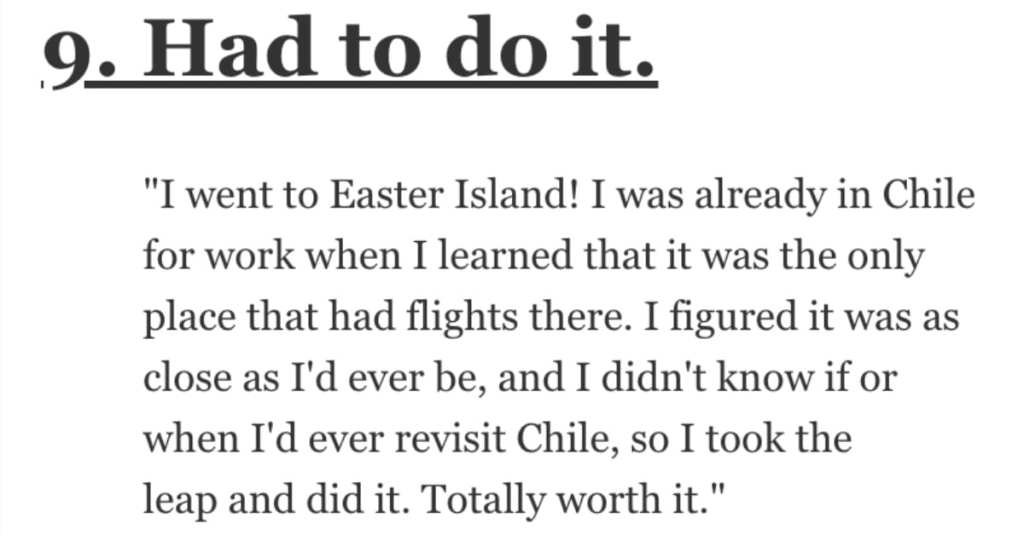 What Did You Do Due to Fear of Missing Out (FOMO)? Here’s What People Said.

FOMO means “fear of missing out”, just in case you didn’t know.

And, whether you want to admit it or not, you probably suffer from it in some form or fashion.

What if I miss that party tonight? What if I don’t go to the club?

The possibilities are endless…

What have you done due to FOMO?

“I was hanging with friends at a bar, and accidentally sat down at the wrong table (really dark inside). Started talking to those guys, long story short, one of them was getting married on Saturday, and he invited me to come. The other one was his officiant/future BIL.

So I went. It was at the bride’s parent’s house, so I only knew my bar buddies. It was a lot of fun though, I was glad I went! A snobby chick at the reception was like, oh, do you crash weddings often? No, I replied, puzzled, I do go when I’m invited by the groom, though.

The marriage didn’t last terribly long, but I’m friends with the bride on the FB now.”

“I asked a girl that works at the pet store by my house if she had a boyfriend this week. She does, but I knew I’d never forgive myself if i didn’t ask.

I said “Oh, he’s a lucky guy,” and moved on. I’ve been too afraid to ask before and that sucks.”

“When I was a kid the cool, older neighbor kids (also young kids) told me to eat grass. I of course didn’t want to, so they told me they all did and I would be cool if I did. So I picked a big handful and ate it while everyone laughed at me.

Afterwards it came out that none of them had, in fact, ate any grass at all, and, as it turns out, none of us knew what would happen if one were to eat grass.

So I ran home where my old man was in the backyard spraying something with a garden hose or some s**t.

I said “hey dad what would happen if somebody ate a big handful of grass?”

He replied, absolutely deadpan “tell me you didn’t eat grass.”

He said, “Tell me you didn’t eat grass…”

Tears started welling up and I said “well I was running real fast and I fell and when I fell my mouth landed on a clump of grass and my mouth closed on it and I accidentally swallowed a whole bunch of it and… Am I gonna die?!?”

He said “Probably. But go in and drink as much water as you can stand and then I will take you to the hospital”

I ran inside and drank as much water as I could and rushed out to the van where the old man was waving me into the open door. We flew out of the neighborhood, screaming towards the hospital while I cried in the back seat.

Finally, we got to the liquor store down the street from the hospital where the old man said, “nah I’m just messing with you. You’ll be fine.”

And he went in and bought beer and we drove home.”

I have a fear of heights so I was very nervous about going on them in North Carolina with my friends. They were so supportive though talking about how, “Its ok, you dont have to go we understand” or “Of course you dont have to, I just think you would actually enjoy it”.

It was because they were so nice about it I really didnt want to disappoint them. I had an absolute blast on them by the way. So much fun after the first 5 seconds of terror on the first line haha.”

The list included a pedicure and manicure, fancy Starbucks drink, driving a red Porsche, gambling at the casino.

It was a crazy fun day but I learned that I have a great life without all that stuff.”

I still have a fear of heights, but all my friends were doing it so I just had to join.”

“I joined my friends in auditioning for the musical in senior year of high school because i just happened to be friends with a lot of theatre kids.

Ended up with a supporting role including a duet and a decent amount of lines.

I still consider it one of the best decisions I ever made. It was a crazy amount of fun.”

Said I could only join if I ate ten ants. So I did.

And then he disbanded the club.”

“I went to Easter Island!\

I was already in Chile for work when I learned that it was the only place that had flights there. I figured it was as close as I’d ever be, and I didn’t know if or when I’d ever revisit Chile, so I took the leap and did it.

Got a skin infection and sun poisoning.”

I have some friends who know how to skate try to teach me, but I just wasn’t good at it.

Too bad because I think skateboarding is really fu**ing cool.”

Have you ever done anything ridiculous due to FOMO?

Tell us your funny stories in the comments.