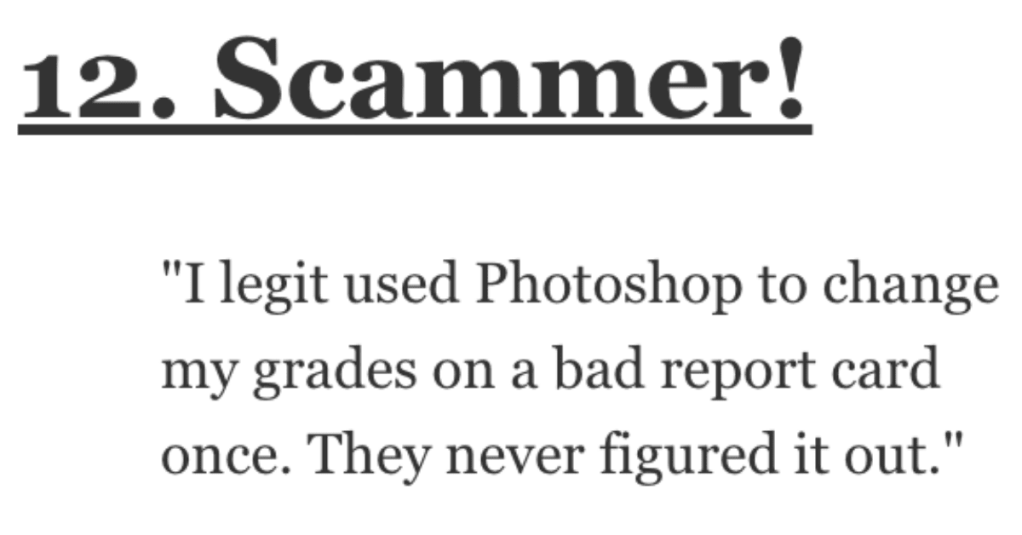 What Did You Do When You Were a Teenager That You Can Never Tell Your Parents? People Shared Their Stories.

I mean, if you’re not keeping a bunch of terrible secrets from your parents when you’re a teenager, are you really even living your life?

The answer is NO.

And today we’re gonna get into the nitty-gritty from people on AskReddit.

Let’s have some fun!

“My friend got us into a car wreck while we were out drinking. The driver was sober, and everyone was unharmed.

I never told my mom about that because she would have never let me out of the house after that.”

No excuse but I was very f**ked up knowing she was about to d** and I would be homeless. I got arrested and went to jail a few months after she passed… she never found out.

I just got off parole this year and today is actually the 18 year anniversary of her passing. I won’t get into all the details but I turned s**t around proper and love my life and family. I have now more than I imagined I ever would.”

“Drove to Las Vegas when I was 17 with a friend after a High School football game (we were in the marching band) told my parents I was spending the night at my friends house.

We drove out there( about 4 hours) Took a picture on a cr**py flip phone. Texted it to a few friends who told us we were legends. Then ate at a Denny’s and drove back.

Scariest part: Driving in the desert at 3 am with no one around I decided to see how fast my c**ppy car could go. Got it up to 110 mph. All the sudden I see light come up behind me and get close.

Car passes beside me and it was a Highway Patrol officer doing at least 125 mph. I slowed down immediate and almost s**t my pants. So stupid and dangerous and absolutely not reason to have done that. Have no clues why to this day we thought it would be fun.”

“Moved to a new town neighbour and his friends asked me to hangout.

We went to a parking lot (Halloween night). Cops showed up because they we lighting fireworks at cars passing by. I was like WTF are you doing? We run (bad decision) and the cuff me and put in the back of car.

I asked the cop to buckle me in because I couldn’t do it. He looked at me with disbelief and then did it. Drove around looking for the others asking me questions told him my story and he let me go.

Said don’t be an idiot and find different people to hang out with.”

My mom even suspected and tried to warn me away, but I denied it.

“Came back home blackout d**nk, vomited on the carpet. My parents were away and I completely forgot my brother and his gf were home. Would not have gotten so drunk if I had remembered that.

My brother let me have an earful telling me what a stupid thing I had done getting so drunk (I was underage) and made me clean the carpet. Rightfully so.

But he also made sure I survived the night and when our parents came home the next afternoon and asked about the wet carpet he covered for me telling some juice was spilled on it accidentally instead of telling them what an idiot I had been.”

“Got really d**nk off my parents liquor one weekend in high school.

Woke up covered in my own vomit.

If I were a back sleeper instead of a side sleeper, I likely would have asphyxiated and d**d.”

“I was a class officer (F 17 back then) and was in charge of locking the classrooms after class.

Abused the opportunity by giving my boyfriend (still current bf) bl**jobs in the classroom.

Got caught by a teacher and was just given a warning after a serious talk. I am making sure my parents will never know.”

“Snuck out a couple of times a month to hang out with my boyfriend.

My parents were SUPER strict, didn’t matter how good a kid I was or how awesome I was doing in school and extra curriculars. I had to be home by 9pm up until I left for college.

I always had to ask permission to go on dates with him/ do anything in general, and they would frequently say no. So a couple of times a month my boyfriend would park his car down the road and I’d sneak out to see him.

We’d go for moonlit walks down the road and hang out in our favorite field. Lol. And now after dating for 7 years we’re getting married!”

It was just one time with the friends I was experimenting with drugs with. All of them had already done it. The first time I tried it, I fell into some kind of deep opioid haze.

I was laying on my friend’s bed and apparently I wouldn’t respond to his voice. I woke up to one of them putting bags of frozen veggies down my pants and one of them slapping me.

Funnily, one of them just messaged me to see how I’m doing. He’s a software engineer now and doesn’t do drugs.”

“I legit used Photoshop to change my grades on a bad report card once.

They never figured it out.”

Tell us your wild teenage stories in the comments.