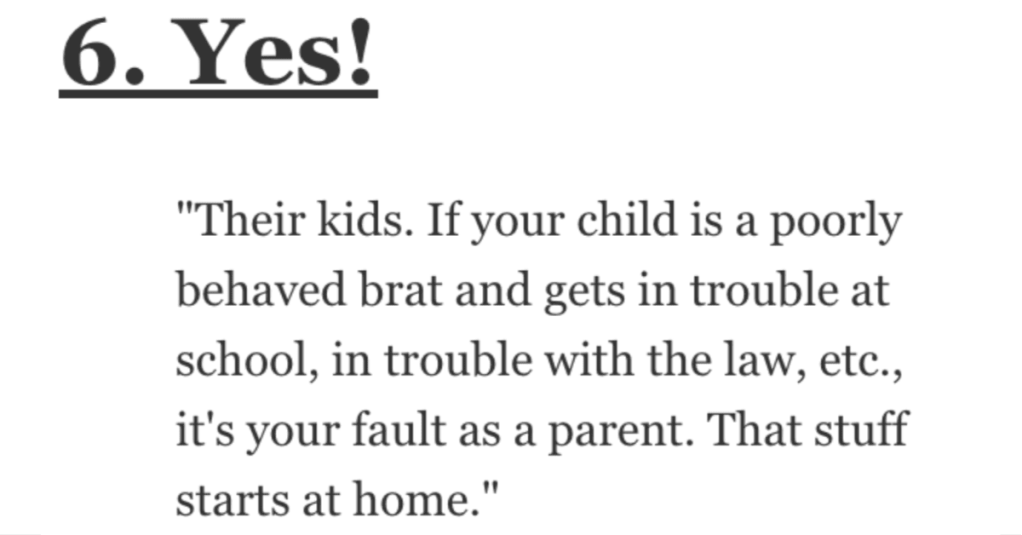 What Do People Need to Take Responsibility for Instead of Blaming Society? Here’s What People Said.

The world is a complicated place, no doubt about it.

And people have very strong feelings about what they believe folks need to take responsibility for instead of blaming it on society.

Let’s see what AskReddit users think about this divisive topic.

You are not entitled to things just because you decided to produce humans and it’s not catered to their whim… Understand that things aren’t always catered to children.”

It’s possible to grow up poor in a poor community with poor parents and not be a m**derer.”

“Their attitude. You can’t control the currents of life.

You can control how you face them. Some people need to apply some pitch, roll, or yaw. Maybe all three.”

“The aggressively political people are the worst.

It doesn’t matter if you are left or right if all you do is rant and rave about politics (and don’t pick up on the tense vibes you are causing) stop thinking you are the victim when people tell you to STFU.

I have a coworker who actually moved onto night shift to “get away from us” because we told him stop quoting Stephen Crowder.”

No one “makes you angry”, it’s how YOU react to what someone does or says.

This is the hardest thing to get people to accept in anger management therapy. It’s not the name-calling, it’s YOU.”

If your child is a poorly behaved brat and gets in trouble at school, in trouble with the law, etc., it’s your fault as a parent.

That stuff starts at home.”

“What/where/how we get our news. I hear a lot of “the media this” and “the media that”. There’s a lot that’s wrong with “the media” and that label encompasses a huge amount of sources that all have different criticisms.

This isn’t to dismiss those claims at all…but they’re businesses. At the end of the day they publish what gets clicks/views. If we stop reading trash, terrible op-eds and gossipy shit, less will be written about it. Also, it’s not the media’s job to spoon-feed us information.

We have to go out and read multiple sources/think critically for ourselves. There’s a ton of great, free news sources (AP, Reuters, BBC, NPR) that are super informative and always get ignored when we complain about the media. Individually we just need to take more accountability when it comes to informing ourselves.”

“Taking your litter home with you when you’re out and about, come prepared with disposable gloves and bags for the rubbish and stop bringing more food or cans of drink with you than you’re going to finish.

I litterpick many half-empty bottles and cans which wastes my time emptying them. I wish people would crush cans before they chuck them.”

“Cheating … no there was not too much pressure on you to be perfect. Yes you could have left, no I don’t care how much you think you were lacking in your relationship… No staying for the kids is not noble. If you are so miserable with your spouse leave…

There is no excuse to cheat!”

10. Gotta work on yourself.

“Not being able to find a partner.

You won’t get one by becoming bitter and blaming everyone else.

The only way is to work on yourself.”

“Mental health – or rather, bad behavior caused by it.

I get it, you have a condition that affects how easily you can do certain things.

But it is not an excuse for every bad or lousy thing you have ever done.”

My city is full of people who are awful at this. It’s common for stuff like what you described to happen and then the owner is like, “Haha sorry! He’s a rescue and we’re working on his dog aggressive tendencies.”

And I’m just thinking, ok that’s well and good, I also have a rescued pitbull with behavioral issues but I’m not bringing her to an off leash park full of other dogs and people who have no idea what her issues are or how to handle them.

Instead, we work with a trainer in controlled environments so that one day, we may be able to go to dog parks without terrorizing the community. To me, knowing the situations your dog can handle is a big part of being a responsible owner.

It’s this “my dog goes everywhere I go” trend. I don’t mind it most of the time. Most dogs do fine. But it doesn’t work for all dogs, and some owners are really bad at figuring that out about theirs I’d guess.”