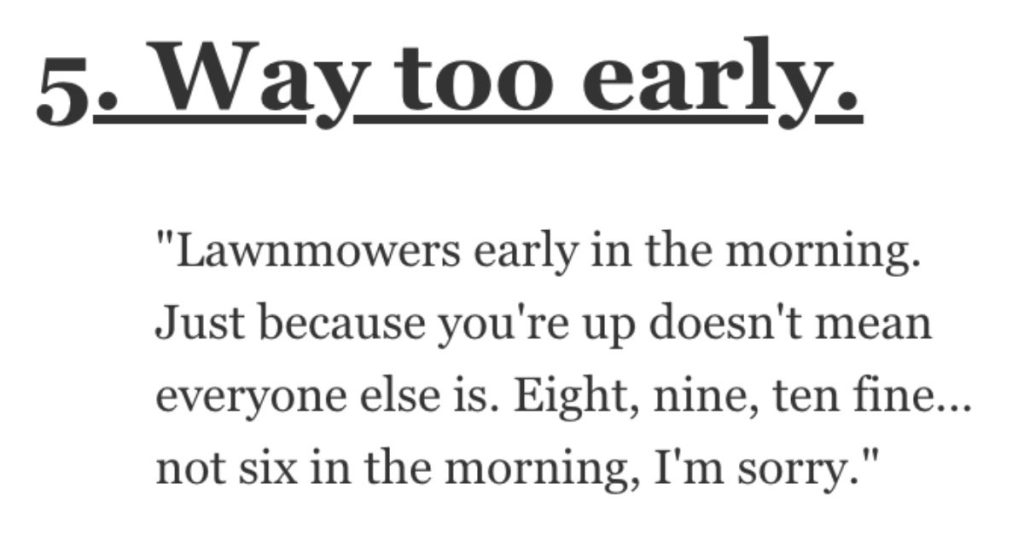 What Do You Find Incredibly Annoying? People Shared Their Thoughts.

But sometimes it can be trying and I’m pretty sure you know what I’m talking about.

And today we’re going to hear from AskReddit users about what they find INCREDIBLY annoying.

“Colleagues that use meeting time for discussing personal things.

IDGAF about AC in your vacation home Bobby, can we just continue with our lives?”

“People who have an urgency to be on their phone all day long even during conversations and stuff.

“Ads… you can’t escape them. They should be illegal. They’re everywhere.

Gas station pumps, every video platform, social media apps, it’s f**king dumb. I’ve never bought something off an ad ever. I even h**e the “other people bought this” s**t too. Idgaf.

“Commercials playing much louder than the TV show we are watching.

“Lawnmowers early in the morning.

Just because you’re up doesn’t mean everyone else is.

“When people bring their Bluetooth speaker to the beach or botanical garden and play their cr**py music.”

“People who complain about their solvable problems to you and refuse any offer of help and refuse to change the situation themselves when pressed on it, coming up with excuses to not bother or why actually it’s not that bad after all, or they can’t because it’s too hard.

I’ve stopped responding to people who do this now. It’s too infuriating to have conversations with people who seem like they’re choosing being miserable long term over the short term challenge and stress of change or work.”

“People trying to force their political agenda on everyone around them thinking they’re superior to everyone because they’re on Twitter.”

People that believe that Zodiac signs defines a person’s personality.”

His annoying time on SNL his bd movies, the fact that he took the great legacy of Johnny Carson and turned it into a pandering sycophantic shill fest for every movie star with a movie coming out that week.

His existence is a stain on comedy.”

“People telling me I need to “be a man” and then getting mad when I stand my ground.

Also people telling me I apologize too much and then demanding I apologize for something later on.

I also get annoyed when people criticize my lifestyle/living choices for no reason… I think I just don’t like people in general.”

What do you find incredibly annoying?