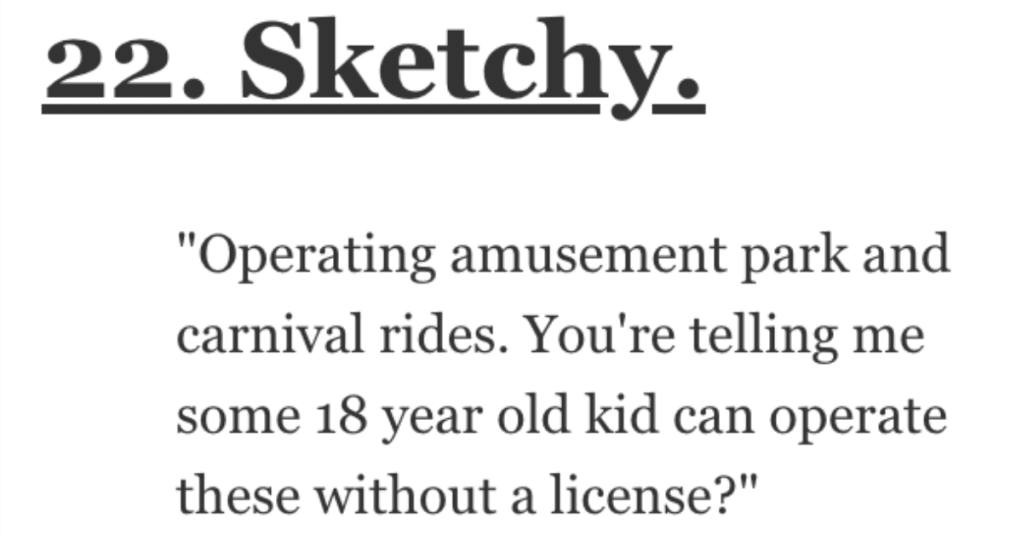 What Doesn’t Require a License but Probably Should? People Responded.

Actually, it’s TERRIFYING to think about things that don’t require one.

And we’re gonna hear a bunch of people sounding off about this!

AskReddit users shared what they think should require a license but doesn’t.

Let’s have a look at what they said…

It is not currently required by law to obtain a Part 107 remote pilot’s license to fly your drone if you are only flying it recreationally; however, recent changes to FAA rules and regulations do require recreational drone pilots to pass a knowledge and safety test called The Recreational UAS Safety Test.

But imo that’s not enough, and also almost noone is checking it, every seller will sell you one.

I’m professional licensed UAV pilot with over 500 flight hours (that’s not that much tbh) and i have seen some s**t. Those things can be dangerous. Everyone can f**k up, I did multiple times but you should be prepared for the risk drones pose.”

You’re telling me some 18 year old kid can operate these without a license?”

“Any position in legislative government.

“G** ownership, but good luck getting that passed in the USA.

I’m all for allowing people to own a g**, but there should be proper licensing and regulation in place top stop the morons having them.”

“It’s horrible to consider living in a world that does this, but, having children.

Filth breeds filth and the cycle continues forever and so much money is pumped into a welfare/social support system that has such a small success rate of getting people out and becoming functional members of society.”

“Drinking al**hol should because it is very dangerous in excess.

It’s addictive and can make you d**nk which often causes bad things.”

Plenty of accidents could be prevented if clueless/ unprepared people wouldn’t be allowed to venture up a mountain with no idea as to what to wear/bring/where to go/orientation, etc”

“Riding a bicycle in an urban area.

In my city, cyclists routinely disregard basic traffic laws, and are a hazard both to pedestrians and vehicles, and it’s so common it’s expected.

I know a lot of cycling advocates argue that urban I infrastructure needs to do more to make the road safe and accessible for cyclists, and I agree with them.

They say people who drive cars need to be more mindful of cyclists, and I agree with them. But it’s a two-way street: if cyclists aren’t going to follow basic traffic laws, we need a way to keep them off the road.”

“Driving a class A RV and/or towing a trailer.

I’m a truck driver who drives 74 foot long combination vehicles which require a class A license but people can drive a 45′ RV with an 18′ trailer behind them which could weigh 20-40k lbs with only a class C license and no training.

There are some states that require it for RVs above 26k lbs but the majority do not.”

“I’m going to take some heat for this, but owning certain breeds of dogs.

I’m not talking about pit bulls, or anyway I don’t know much about them/the controversy around them. And I’m not talking about stigmatizing certain breeds of dogs (like keeping them out of apartment buildings, or airplanes). That’s a different thing and I don’t have a developed opinion on it.

I’m talking about getting a license to own a husky, for example. Or an Australian cattle dog—dogs that were bred for specific hardworking purposes, and become fashionable or look cool, and so people want one for the coolness factor without knowing much about the breed, or how to respect its needs.

That results in a lot of sad, frustrated dogs with clueless or overwhelmed owners, which leads to lots of issues (especially in cities, but anywhere, really). Like frustrated working dogs tearing up apartments, biting other dogs, just generally being uncontrollable.

Kind of like getting a boater’s license or motorcycle license, I think certain breeds of working dogs should require the owner to take a class and receive a level of certification and license to own the breed.

And if they don’t want to, there are lots of other less powerful, more sociable breeds to choose from.”

One time, I was on a lake fishing, and this boat filled with 6-7 people were pulling an inflatable tube tied with a rope to the boat. There was a person on the tube, so just a normal summer activity.

The thing is, there is a rule that so have to be so far away from other boats, and they were really close. It seemed like a lot of them were drunk.

My dad put his hands up in the air and said, “what the hell!” But they couldn’t hear us and one of the people on there thought he was waving to them. That just pi**ed him off more.”

“Having a service dog.

I’m actually quite stunned that there aren’t licences or cards at least, that can show who’s genuine and who isn’t.

Too many people falsely claim to have service dogs, simply because they want to take them in a store.”

“The Reply All button.

I saw a guy torpedo his own career with 5 words and Reply All.

“Can you believe this motherf**ker?”

He replied all to an email from the CEO.”

I did this once and it was a terrifying experience.

At the time I remember thinking it was crazy that they just let me rent this beast.”

Can’t beat it, regulate it.

“Riding one of those powered scooters.

Im not sure how it elsewhere, but where I am it is total chaos. People be driving them on the sidewalk, way too fast, throwing them everywhere, in the water especially, and you generally see them lying around everywhere.

And they also have no sense of traffic, when you’re driving you have to look out for them like they were children.”

It is way too easy for anyone to claim their dog is a service animal and it is really hard for someone to challenge it.”

Any Budweiser-fueled hillbilly with a key and some gas can go ripping around the lake as fast as they can go.”

There are so many kids in my neighborhood who drive around in their parents golf carts in the street.

They drive slow, on the wrong side of the road and never follow any traffic laws.”

“Being a police officer.

Lawyers have them. Judges have them. There should be some state standard/moral that they should be held to to keep their license to keep enforcing the laws of the US.

Police unions fail to do this. Morality and laws are not something to be bargained with the unions.”

Too many people breed cats and dogs for a quick buck but have no idea what they are doing.”

Don’t make repairs? Your license is suspended and you have 30 days to sell after which time your property will be confiscated.

That’d sort SO MANY slumlords out real quick.”

If you want to call your content news, then you should have accountability in the stuff you put out, including providing references for your claims.

In the West at least, any a**hole with money to rent a domain and some servers can spew out idiotic propaganda on their very own official looking “news” platform.”

“Bicyclists where I live.

Riding your bike? Cool, great! But committing traffic violations when you’re held to similar standards as regular vehicles (this IS how it works where I live)? Yeah something needs to be done.

I constantly see bicyclists nearly running over pedestrians when they run a red light, or f**king up traffic because they think they’re above the traffic standards. And then they’re the ones that get pi**y when they cycle into moving traffic.

Before you say anything YES we have bike lanes where I live but A LOT of people don’t use them. I live in a very bike friendly town so there are many many safe options for cyclists, a lot of them just don’t take the time to use them.

If you don’t do this then great, cool, but enough people where I live DO do it that I wish something was done about it.

Meanwhile the motorcyclists in my town are awesome.”