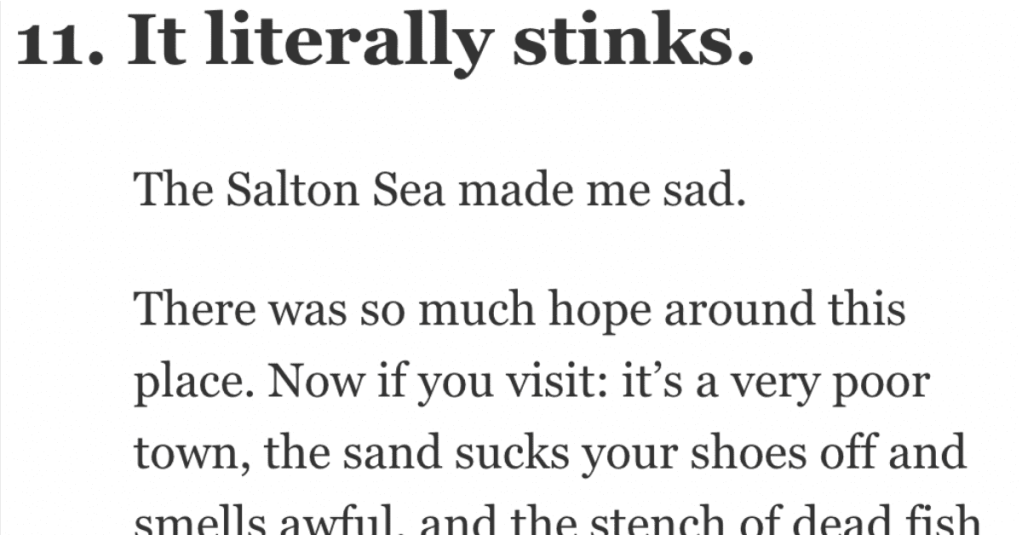 16 People Dish On The Worst Place They’ve Ever Been

We have a tendency to be hard on the places we live, unless they’ve always been “home” to us – it will never be as fun, or homey, or safe as the place we grew up.

Likewise, when we’re visiting a new place we can build it up in our mind, which sometimes leads to disappointment.

That said, these 16 people have some pretty solid reasons for hating what they deem the worst place ever.

I lived in a tiny town (population: 790) in rural NH where the post office, a hair salon, a mechanic, and some apartments were all in the same crappy old house.

The town library and town clerk were in another, less-crappy-but-still-old house down the road, but there were many books they wouldn’t carry because the town library also served as the school library, which wasn’t connected to it, but was across the street & down the road a bit.

I felt so alone in that town.

Also can’t forget the hundreds of miles of new roads that led to… more sand and dirt.

Oklahoma County Jail. I’ve spent some time in a few other jails for various misadventures, but that place may have well as been a prison camp in a third-world country.

Computers were down for 36 hours so everyone was crammed into holding cells awaiting processing, there were lice crawling everywhere, some asshole threw his lunch bag in the toilet (not that I blame him, the green bologna sandwich isn’t very appetizing) so it backed up all over the floor, the entire staff looked like the My 600-pound Life All-Star Team, and you were lucky to get a 6 oz. styrofoam cup of water once every six hours.

Absolutely disgusting, especially when my crime was a 6-year-old failure to appear charge for a speeding ticket.

I live in New Zealand, and to get from my city to the country’s biggest city Auckland you used to have to drive through a town called Huntly.

I don’t care how nice the locals might make it seem, it is the ugliest, dirtiest most feral place I’ve been in this country.

Thankfully, they put in a highway about 1-2 years ago so you can now bypass it.

Nuevo Laredo, Mexico, 1985. I think my Mom and aunt went to buy cheap liquor. Great idea. Take three kids under five to what seemed like a war zone for booze.

The Salton Sea made me sad.

There was so much hope around this place. Now if you visit: it’s a very poor town, the sand sucks your shoes off and smells awful, and the stench of dead fish permeates the air.

Now their only bar presents as a David Lynch nightmare if you go.

It’s the closest I’ve ever seen to a post-apocalyptic wasteland. And due to the fact that most of the rotting abandoned buildings are from the 1960s, it’s eerily similar to a Fallout game.

This documentary can save you a trip there, but it doesn’t quite capture the feeling of driving through a rotting ghost town in 115F heat, completely empty except for a couple of meth heads staring at you from under an awning.

Slough. Where the U.K. office is set. It’s grey. The mood. The city. The sky. The type of place where 12 year olds will be drunk on the high street at 4pm. A very depressing city.

9. Sounds appealing to someone.

“We had two bags of grass, seventy-five pellets of mescaline, five sheets of high powered blotter acid, a salt shaker half full of cocaine, and a whole galaxy of multi-colored uppers, downers, screamers, laughers… and also a quart of tequila, a quart of rum, a case of Budweiser, a pint of raw ether and two dozen amyls. Not that we needed all that for the trip, but once you get locked into a serious drug collection, the tendency is to push it as far as you can.”

I owned a pistachio farm 25 miles northeast of Barstow and it wasn’t that bad. The REAL shithole is the group of crap cities to the south, Victorville/AppleValley/Hesperia. I could walk around Barstow (and I did because of pokemon go) and not feel like, oh god, in victorville I wouldn’t even want to get out of my car. Stabby hobos abound.

Barstow has a train museum, a drive in movie theater, the Mojave desert museum and the fairly fun Treasure house antique mall. Gateway to Rainbow Ridge, a really pretty place, home to tons of amazing fossils of camels, big toothed cats and other exotic mammals.

Plus, great place for rock and mineral collecting, as seen in the field guide, Rockhound Barstow.

I was helping friends move across the country and I called my husband one night when we stopped. He said, “Where have you gotten to?” and I said, “I don’t know but it’s the ugliest place I’ve ever seen in my life,” and he said, “Oh, you’ve gotten to Midland Odessa,” and he was correct.

I have seen a lot of the world and Midland Odessa, Texas, is by far the most terrible place I’ve ever looked at.

6. Can you judge a place by its gas stations?

It was a gas station about an hour from Myrtle Beach. We had to pee and get just a little bit more gas. (Me and my husband) We both walked in ad it was super crowded. Which didn’t really shock us as much as overwhelm. But what really got us, was the bathrooms.

Both toilets had fecal matter on the lids and seat. And not just a smear, like if someone accidentally got it there or didn’t realize they left a streak from their cheek. There was actual little clumps left on the seats. Pee in the floor, no paper towels, or soap. The walls in the women’s were covered in fecal matter and menstrual blood. I ended up hovering over the toilet because a part of me still felt bad peeing anything in the floor.

The toilet paper had poop on it so after I was done I pulled on my pants and left. Didn’t care. My husband did the same. He said he had to aim father than normal. The toilet was already full and he was not planning on flushing when he say fecal matter on the handle.

Another gas station story. Years before that, me and my mom were driving at night to Texas. Somewhere along the way we stopped at a station. I had to pee. To get to the bathroom I had to walk into a outward concrete overlay. Dirt ground and the door only locked by a little hook and eye. Literally looked like I walked into a murder bathroom. Walls and lighting was a eerie shade of blue green you see in the horror movies.

Leaving texas we stopped at a Dairy Queen. It used to be a person’s house and when you walked into the “restaurant ” It smelled like old mildew. Didn’t even have a bathroom. And the counter was a regular kitchen counter. Imagine a 60’s-70’s style house with a dairy queen inside. That was it . Haven’t found anywhere else yet but those were…interesting.

I used to visit schools to give science presentations. Based in the Midwest, I elected the ‘Western tour’ one year, which landed me in Midland, TX. I took a drink from the school drinking fountain and spat it out.

One of the teachers, who knew I was from the Great Lakes area, laughed and said, “Was it the salt or the petrochemicals that got you?”

Don’t get me wrong. I love Hanoi and most of Vietnam but the in the old quarter of Hanoi the sewage tends to seep up into the gutter due to ancient broken pipes.

When a waft hits you in +30c heat and high humidity I’m not sure there’s much worse than that.

It felt like I stumbled into the movie set for House of Wax, Children of the Corn and Deliverance all in one place. They had a hair salon/mechanic/courthouse/ jail all in one building. The judge’s wife was the hair stylist, the judge was also the mechanic and the sheriff was his son.

I was trying to think of the shittiest place I’ve been to and everything I came up with all had their bright spots, Mexican slums, Indian slums, broken down rust belt towns, etc.

But you nailed it: Skid Row LA is the worst place I’ve even seen.

For me it is Hope, Arkansas.

I was a kid and my family stayed the night at the Holiday Inn on our way to somewhere else.

When we checked in they gave us a complimentary fly swatter.

Well, I have to say that I think I’m convinced.

How would you answer this question? We want to hear about it in the comments!