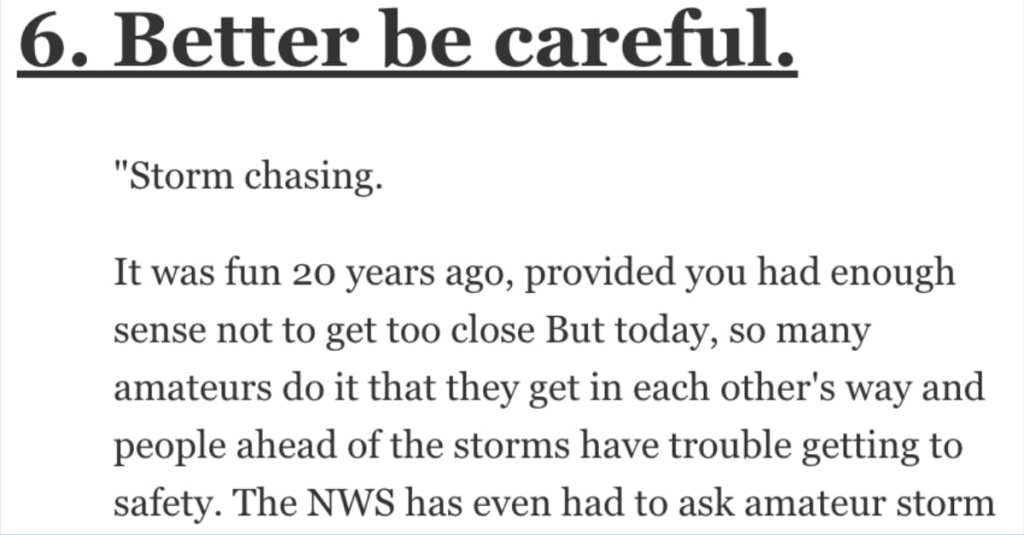 What Got Ruined Because Too Many People Start Doing It? People Spoke Up.

I was into it before it was cool, man!

No matter what generation you belong to, there’s no doubt that you’ve probably heard that once or twice about a band or a movie or some kind of trend.

What do you think got ruined because too many people started doing it?

They are beautiful and can make an amazing scene for a professional photography shoot for someone who is careful not to destroy the area in the process, but put that photo on Instagram and everyone wants the same picture and ends up trampling the fields, which then results in all photography (and even visitors) being banned.

Same with many, many natural/historic environments.”

I started doing it in 2007 when it was still relatively unknown. It was a pretty great community and the focus seemed to be on fitness for anyone, not just for those who wanted to be semi-competitive athletes.

I kept getting injured from workouts that were designed for elite athletes and coaches who pushed their students as though we were all trying to qualify for the games. Some of us just liked being in shape and didn’t need to PR every WOD.”

“I loved a festival in Scotland called Electric Fields.

Then it got really busy and now it’s stopped being held and I think it’s because the small area of land just couldn’t take it.

Plus the people that started going weren’t the same type of crowd and the atmosphere changed.”

When I was a boy in the 1960’s we could spontaneously decide to go tent camping at a state park on a weekend. We could even gather firewood.

I was born and raised in Austin, still live here today and I can definitively say this is not the same city I grew up in.

Everything that made Austin such a great place has been destroyed and is now a fake, commercialized, or polluted version of what it once was.

I would move away in a heartbeat, but my husband’s career is firmly shackled here. It’s so sad.”

It was fun 20 years ago, provided you had enough sense not to get too close. But today, so many amateurs do it that they get in each other’s way and people ahead of the storms have trouble getting to safety.

The NWS has even had to ask amateur storm chasers to knock it off because some of the professionals have hit traffic jams while trying to get out of the path of tornadoes.”

“May the Fourth. I hate that every single company tries to tie in their macaroni and cheese or auto dealership to this stupid Star Wars day.

April Fool’s Day. Again, you spend the whole day wading through unimaginative, tired cliches from boring companies and sports writers who can’t be bothered to put more than a second’s thought into their ‘hilarious’ joke.

Particularly that a lot of young kids now see it as a way to become rich.

You pretty much can’t play online games just for fun.”

“Van life. I dreamed of living in a van in 2010 but could never scrape together the money.

I find a parking spot I can buy for super cheap in a crazy hot spot in the city, now everybody and their cousin are buying up vans to live in.

Now trying to chase the teardrop trailer dream, build something lightweight enough for a super small car to haul but can leave it behind at campgrounds while we explore and it won’t blow away.”

“Canning became next level difficult after the mason jar decorating fad hit. People buying up jars for receptions and events.

My SIL not returning jars because they are using them for drinking cups…. Thanks, now I need to buy more jars if I’m going to continue gifting my homemade jam goodness. Now, I purposely gift the 4oz jars because I don’t use them for my personal projects so it isn’t as annoying if they don’t come back.

The pandemic gardeners led to spike in first time canners and a shortage of jars and lids but I’m not going to fault them because they are using the jars as intended. The manufacturers/supply chain wasn’t prepared for that.”

“This may get me burned at the stake, but here goes: “Nerd Culture.”

The very term I find distasteful but at the same time its apt. Comics, gaming, table top, these were all fringe communities with companies that catered to the community. As nerd culture grew in popularity those companies , in some cases, abandoned their true fan base for the mass market.

Things that were for a specific subset of people became watered down for a larger appeal. The problem being that those fringe customers were often life-long loyal to their genre. The mass market customers flirt with a trend for a few years, then disappear. That causes the companies to then chase the next wave of mass market over and over.

Never really growing the brand like they used to. Instead they’re constantly rebooting or restarting. Recycling old ideas into something new for the new client base.”

Before it became the off roading hot spot it is now, the environment was so well kept and clean, and everyone respected the land and the rules that came with riding on the trails. But as soon as it was discovered/noticed by people it became a disaster. Not only are the trails relatively destroyed but the environment is as well.

Garbage is everywhere, and there is so much vandalism both on the trails and landmarks. I’m really ashamed of people who come here and ruin this magnificent place. I wish people would learn to respect the land and to also learn basic knowledge of off-roading. If you are one of those people I am immensely disappointed in you. It’s people like you who are causing the trails to close down.

The same trails that I grew up riding on, the same ones that I hold so dearly to my heart, and the same trails that currently are being threatened of closure. Please if you are visiting Moab for off-roading respect the land, and follow basic common sense. I couldn’t imagine what I’d do or feel if this piece of my life got locked away.

Do it not only for me but for everyone. So that everyone can come explore and enjoy these trails. Thank you.”

Do you think there are some things that got ruined because too many people started doing them?