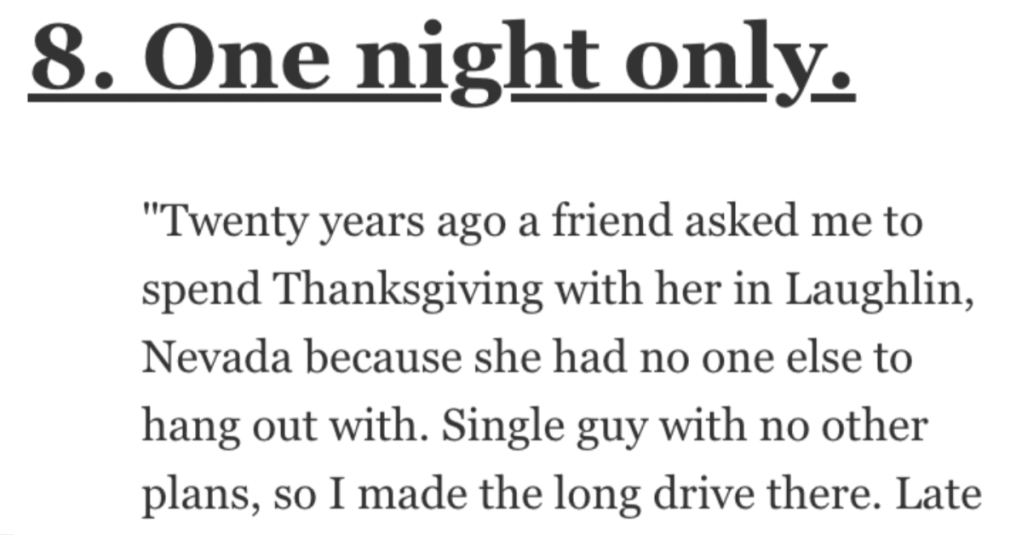 What Happened to You That No One Believes? People Shared Their Stories.

That’s a nice story my friend, but no one believes you…

Has that ever happened to you before? Well, if it hasn’t, let me fill you in… it sucks!

But these AskReddit users swear these stories really happened to them.

“I nearly drowned on the Fourth of July when I was 16. Parents, aunts and uncles were around the pool and didn’t see anything and insist it didn’t happen because they would have seen it.

I agreed to swim with my younger cousins. They were ecstatic that a ‘big kid’ agreed to swim with them. I jump in and they immediately all dog pile on top of me, they’re pushing me down in their excitement and I’m trying to get to the surface. I remember blacking out for a second and then thinking, ‘I’m not d**ng in a f**king swimming pool.’

I did the only thing I could think of at the time, I went against my instincts and dove deeper into the deep end and eventually got out from underneath my cousins and pulled myself out of the pool.”

“I went to my first festival in 1991, watched the opener at 10 AM with 100 other mostly uninterested people, and did not think too much of it.

Half a year later, the band was all over the hit-charts. The name of the group: Nirvana.”

“I was meeting some friends for dinner after work one night.

We agreed to meet at a specific time and as I was leaving work, made note of the time. I knew I would be arriving late because of my regular commute time, which was around half an hour. I take my usual route to their place, which is a straight shot. 20 minutes go by, I should almost be there, when I noticed the road was looking a little unfamiliar.

I tried reading street signs and decided to take the next turn I came across. I follow the road an extra 10 minutes and end up on a main road. The same road that leads from my work to my friends’ place, that I thought I was on. From where I was my commute time was around 20 minutes.

I did not make any turns while I was driving, have no idea how I ended up there. My friends were convinced I probably just drove on auto pilot or fell asleep at the wheel.”

“Went camping last year. Woke up to something pressing in on the tent down by my feet. Watched as the pressing in shook the whole side of the tent and moved up from my feet to my hip.

That’s when I realized that whatever was pushing in on me was a human hand. Could clearly see the fingers outlined. Immediately took stock of everyone in my tent – all present and accounted for.

Jumped up out of my cot. I was the only one who saw it. Everyone else told me to go back to bed. It was just a deer or something. Spent a good hour trying to convince myself I hadn’t seen a hand.”

“I was chillin in a windowless room with my aunt’s dog when the shadow of a man with a beer belly walks slowly across the wall 3-4 feet away from me towards the door and vanishes.

I know I wasn’t crazy because the dog’s head was following it too. I refused to go back to my aunt’s house. She said that it’s normal and that it’s her deceased relatives coming to say hi every now and then…”

“When I was young I had hot oil spilled over the whole right hand side of my body. Burned the s**t out of me. Was blind in one eye, covered in patches for weeks.

One day my mum took me in to the hospital to get my dressings changed and the doctor told her I would likely have to have plastic surgery and skin grafts as it wasn’t healing.

Go to change my dressings and there’s not a fuckin mark on me. Completely healed. Eyesight normal.

No one believes the story so I just don’t tell it anymore.”

“I live in Canada. I walked into a hotel elevator about 8 years ago and saw Brad Pitt and a body guard.

I said, “oh!” And started to back out. Pitt said, “Hey don’t worry, come on in” and smiled warmly. He could let I looked nervous so he offered a handshake and said, Hi I’m Brad” I shook his hand and introduced myself, he asked how my day was, I asked about his and when it came to my floor and I got off, he said, Pleasure to meet you Amber”.

Not that crazy, but he came across as very kind to me.”

“Twenty years ago a friend asked me to spend Thanksgiving with her in Laughlin, Nevada because she had no one else to
hang out with.

Single guy with no other plans, so I made the long drive there. Late one night I’m the total amateur at the craps table and start rolling dice with a really cute girl. Way outta my league. Lots of drinks, winning big just a great time.

She really knew what she was doing. Placing bets I’ve never even heard of. One thing leads to another and I end up back at her room. The next morning we’re having breakfast and she shows me her pics in Playboy magazine. We said our goodbyes and I’ve never seen her again. Only one night stand I’ve ever had in my life.

Yep, just your average ordinary looking guy that slept with a Playmate. I only told a few people but they didn’t believe me so I decided to mostly keep it to myself. I don’t blame anyone for not believing because it sounds like the most made up ego boosting guy story ever but I did end up finding the magazine with her pics and yes, for a mid 20’s guy it did boost my ego.”

I was a teenager and went to visit the family that babysat me when I was growing up as they had relocated out there. I spent a month with them, living on a Christian foundation that I’m not certain exists any longer. It was beautiful there, and the scent of jasmine hung in the air memorably.

Throughout the month, we tried to hit up as many tourist things as we could – the beach, down to TJ for shopping, In-N-Out Burger, Mann’s Theatre, Disneyland. The Glendale Galleria – I remember I got my first manicure while I was there. The last weekend I was there, we went to Universal Studios.

I remember we took a tram ride or something for a park tour and seeing the Psycho house still on the lot. Afterwards, we did the infamous earthquake ride. While we were in line, the mom said, “I wish we could have a real earthquake while you’re here, just a little one, so you could see what it’s like.”

Next morning: 4:57 AM. I wake up and my bed feels like it’s rolling all around the room, as if someone put wheels on it. I don’t remember being scared, just wildly confused.

It was an earthquake, alright. The Landers Earthquake. 7.3 magnitude.

A few hours later, that previous day’s wish didn’t disappoint: The Big Bear earthquake occurred, magnitude 6.5. I remember hearing a news anchor say that it was the first time in recorded history that such large earthquakes had happened on separate fault lines on the same day. I don’t know if that’s true or not, but it stuck with me.

No one back home, aside from family, believed this story. But it happened. I remember that day. I remember having to go to church that morning and feeling aftershocks in the pews, because it felt like somebody had their foot on the back of the pew, shaking it.

I remember having to walk around and help look for structural damage, and that water had splashed out of the pool. I remember my mom being really freaked out and being glad that I was coming home soon. It was all a wild coincidence but super memorable.”

“I had one of the Covid precursors. Only about 11,000 people in the world had one.

I was deployed to Kuwait in 2015. Toward the end of the deployment I was on a long field exercise and some camels went through our area. At one point I was chasing them away from my water.

About five days after I got back I got really sick. I had a terrible respiratory infection and developed pneumonia. I was sick for a month while they tried different antibiotics. We were out on a FOB in the desert so they didn’t run any tests but the doctor told me, “I think you’ve got a nasty virus. Probably a coronavirus.”

Five years later when we all got Covid I thought, “I’ve had this before.” Did some reading and yeah, I definitely had MERS in Kuwait. I thought it was so strange that I was very, very sick but nobody caught it from me, even living so close together. It turns out MERS doesn’t pass from human to human very easily. I caught it from the camel I chased off and then never passed it to anyone else.

Nobody ever believes me though, since now everybody thinks they had Covid before the pandemic really kicked off. But I know I had MERS because it was exactly the same as Covid and I’ve never felt any other illness like those two.”

“I once saw a US Navy twin prop engine cargo plane fly over my bay. One engine was backfiring and sputtering. A Coast Guard helicopter was flying nearby and trailing it.

I thought it was going to ditch in the bay. But it carried on to try for the Naval air station 25 miles away. It only made it 20 miles and crashed in the woods. The crew did not survive.”

“When we were about 10 or so, my cousin and I were walking back from the beach on Cape Cod and saw a cougar.

It was near a small patch of woods with a marshy area where it could have lived. I’ve never heard of any reports of cougars on the Cape but I will never forget what I saw!”

Tell us some of your outrageous stories in the comments.