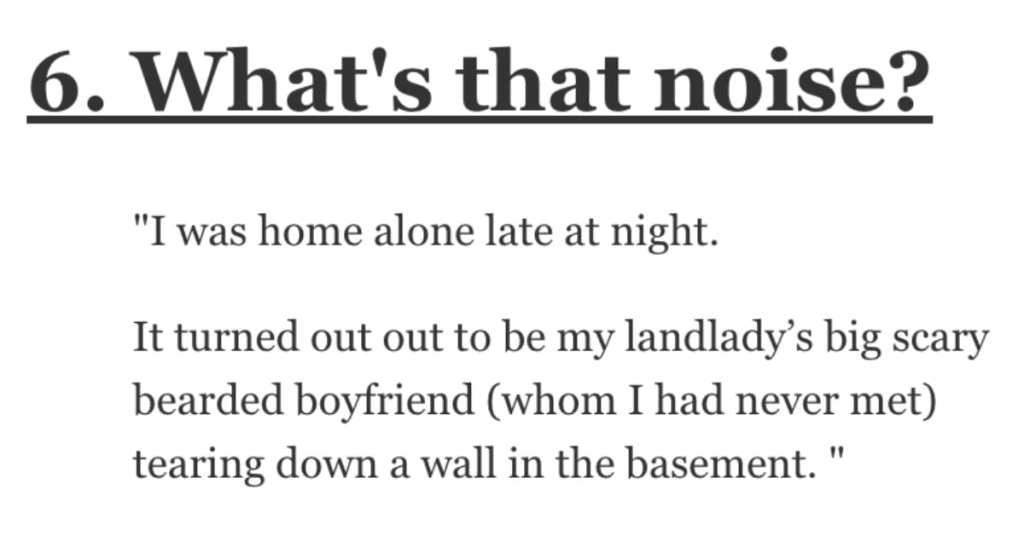 What Happened When You Investigated a Strange Noise in the Middle of the Night? People Responded.

Things that go bump in the night…

You know you’ve heard these unsettling noises in the middle of the night when you’ve been home alone.

So what do you do?

Ignore it? Get up and go exploring with a flashlight?

It’s all a crapshoot…

Have you ever investigated a strange noise at night?

“I play Xbox quite a bit, usually with the TV sound off so it doesn’t come through the mic but my headphones make it so I don’t really hear anything in the apartment.

While playing some video games I hear this clicking, assumed it was the game, went on without thinking much of it. But I heard it again while waiting for the next match and no one was talking so naturally I keep playing cause it was comp. After that match though I went full detective!

Checked fire alarms, refrigerator, stove, light switches, lights, garbage disposal, fans, faucets, doors, door hinges AND knobs. Nothing. Could not replicate that sound. Being the then 27 year old scaredy cat that I am, I promptly turned on every single light in the apartment until my roommate came home to save me from potential demons or worse…people. She came home and we looked again, checked cabinets this time for pots or pans that could have shifted, still zilch.

As we’re sitting there just looking around to see what else could possibly make a clicking sound, the glass window in the living room clicks. We live on the second floor. We ran to her bedroom to look outside, no one around. WTF. We sneak back to the living room, still hear the clicking.

She works up the courage to open the blinds and this bird is pecking at our window. I screamed, she screamed, birb screamed. Hasn’t been back since.”

“Was at home. The only two other people who live with me were at work and out with friends.

Heard something similar to knocking on the front door (which is odd because it was 4am). I knew it’d be no good so I tried to ignore it. Then I heard a noise downstairs.

I didn’t have any weapons or anything near me other than a dull scissors, so I grabbed a powerful laser pointer that was bright enough to blind people with even a touch on someones eye.

Turned it on (it was bright enough to enlighten every room it shined in) and began clearing room to room. I got a chance to look out a window to the front and saw a van out front of my house. Knew nothing good was happening tonight.

Went to a room upstairs and called the cops. As I was on the phone, I saw them leaving, running away actually, almost like they heard me calling.

Cops found them the next day, don’t know much after that, but it’s nice to know they were caught.”

“Thought it was the cat knocking something.

Then the cat meowed from right behind me.

Turns out it was a cat, just not mine.

Neighbor’s cat got in the kitchen.”

“My husband was asleep upstairs. It was 3 months ago and I was up late after a midnight finish at work.

I had kicked off my jeans and wrapped the blanket round me, decided I was bored of the TV so I muted it (it was still on) and got my kindle out to read. The cat was curled up on my feet when I heard noises of the tarp covering the garden furniture being rustled outside the back door of kitchen, didn’t think too much of it as it was a really windy night.

Anyhow a few moments later I had a scraping and popping noise which sounded like it was coming from IN the kitchen, the cat jumped up running and growling at the back door. I got up and stepped in to view of the doorway between kitchen and livingroom (which had been open, you couldn’t see me from the kitchen but could clearly see someone was up and in the next room with the TV on).

There was a man at my back door with something metal in his hand and then I just started screaming. He ran off. Husband ran down. Anyway about a month later he got in again this time while I was in myself.

It was during the day and I was about to leave for work, opened the back door to let some air in the kitchen, walked upstairs for a minute and heard someone walking in living room, thought Husband had come home early and shouted from the top of the stairs “that you babe?” only to realise when whoever it was I heard ran out the back door and smashed my cold frame in the garden when they did that it absolutely was NOT my husband.

5. Scraping on the glass.

“I was 15, babysitting 3 little kids in a cottage in the middle of nowhere in the west of Ireland. Parents went to dinner, kids asleep, it’s remote so there’s zero noise.

Then I hear a bang at the front door and scraping against the glass. It was the most terrifying noise ever! I almost s**t myself. Turned off the lights, ran to the kids room, peeked out the window and could see nothing. Just the constant scraping at the glass by the front door. I stayed there until the parents came home.

When they walked in they were like Hi, how’s it going kids ok? I’m totally freaked out! There’s been some weird scraping at the front door, I can’t see anything out there, did you?!? Oh there’s a bucket of lobster one of the local fishermen must have left, how nice!

I nearly fu**ing d**d! Like wtf?! Lobster scraping the window with their claws. I had no problem eating those things the next day!”

“I was home alone late at night.

It turned out out to be my landlady’s big scary bearded boyfriend (whom I had never met) tearing down a wall in the basement. “

“Home alone. Burglar alarm goes off at dawn. The sound drowns out anything else.

I got out my gun and called 911. I was shaking so much, I ended up putting the gun back in the safe so I didn’t sh**t myself.

Cops came, looked around the perimeter. No evidence of a break in. No harm, no foul.

Next day, Alarm goes off at dawn.

Turns out, the heat of the sun caused the alarm to go off. It hadn’t happened before due to the season and angle of the sun.

Moved to a place where leaving the front door unlocked all the time is common place and we don’t need an alarm.”

“Back in the early 90s when I was 10 or so, we had just moved into a new house. We had noticed our doorbell would ring and when we answered it, no one was there.

We brushed it off as some kids playing ding-dong ditch on the new family in town. A few weeks in my parents had gone out for a date night and left my brother and I home alone (brother was older and responsible… for the most part.)

The doorbell rang when we were suppose to be in bed…. thinking it was our parents, we ran and hid in our beds to act asleep. The doorbell rang again, and once more shortly after. My brother thinking my parents forgot a key and were trying to get our attention, decided to answer it

Few weeks later we noticed someone arrived at our neighbors house, walked up to their door and our doorbell rang. Apparently the previous owners owned our house and the house next door and rigged the doorbell so when the door rang next door ours would too… I guess to let the previous owner know someone was next door if he wasn’t there?

But for the first couple months we thought it was pesky kids but then we just started calling our random doorbell rings Casper before we got the lines fixed.”

“Our house is near a home for assisted living, mostly for Down syndrome. Sometimes the night staff are either understaffed or just lazy. So they didn’t see one get out.

They made it into our lawn and started crying and moaning at 1 am. I was scared sh**less and didn’t have the guts to check it out.”

“My sister and I were home alone in high school. I was probably 15 and she was 17. Besides my excellent ability to s**t talk, we were fairly defenseless bc of our smallness.

Anyway, we’re sitting around watching tv and suddenly hear something as if it collapsed onto our ceiling. Imagine a tree or large animal coming down above you. That sound was followed by continuous pounding and horrifying, dragging and clawing sounds.

Eventually, the pounding stopped, but the clawing worsened. It sounded like large creatures (harpies or giant eagles) were using their talons to rip through our ceiling. My overactive teenage imagination was going wild. Even the pizza man who brought our food looked concerned, but he said he hadn’t seen anything on our roof.

Fast forward a few days, and the maintenance department announced that our tiny building had attics and that a few raccoons had somehow gotten in and were running around. I was befuddled bc those noises sounded more ppl sized…but ok.”

Have you ever had to investigate a spooky noise at night?

If so, share your stories with us in the comments. Thanks!