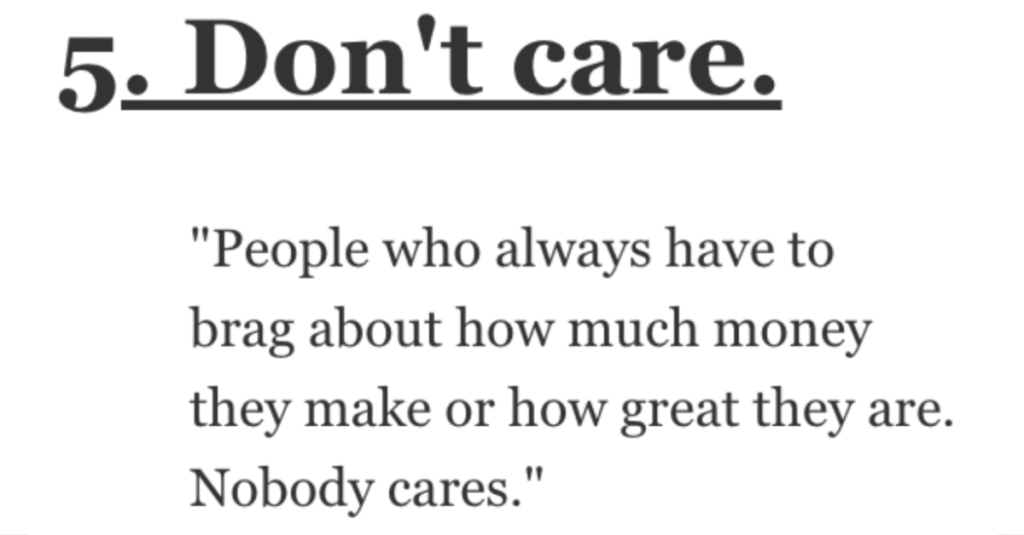 What Immediately Makes You Think Less of Someone? People Responded.

Woooo, boy, this is gonna be a long list for me…

Actually, you know what? We don’t have time for that today so I’m going to give you one example of what immediately makes me think less of someone.

When someone is rude to a waiter or a waitress at a restaurant.

Check out what AskReddit users had to say.

“When they try to one up you instead of just saying something like “That’s awesome dude” or actually showing some kind of interest in what you’ve said.”

“When they make you feel like the third wheel. And when you back off, they want you to be involved.

It’s like “I don’t like you and I am going to make you feel unwanted! But you can’t leave. You are not allowed to be with anyone other than us.””

“When they have a very strong “Yeah I’m a b**ch/harda**, like it or leave it” attitude.

People like that are just annoying to be around because they’re so unnecessarily negative or assume the worst in anyone they meet; it’s glorified so much these days.”

“I had a coworker with some kind of skin condition on his forehead.

The second he left the room, a different coworker turned to me and said “eww, his forehead grosses me out.”

This woman was like 28…lost all respect for her right then and there.”

“People who always have to brag about how much money they make or how great they are.

“The person only wanting to talk about their problems.

When I tell her about my worries it’s always a minor thing but when she has something happening, it’s the most dramatic thing in the world.”

I have a certain tolerance level, there’s “everyone’s already going 10 over” which is mostly fine.

Then there’s “I’m immortal, and this road exists for me alone, and no one else here deserves to use it, and everything I do is safe and justified because the world revolves around me.””

“Being Mr. Know It All because they spend too much on Twitter.

And having an opinion on everything and anything but like in a defensive way.

Such a turn off.”

“Cutting people off in conversation.

I admit it’s more intense when they cut me off in particular.”

“People getting mad at kids for not being able to do something an adult can.

It’s almost like kids don’t pop out of the womb with all the knowledge of the world. And I’m not talking about annoyed.

I’ve seen adults throw f**king tantrums at a kid not being able to do something that a kid wouldn’t be able to do.”

“I can’t stand if someone is rude to a retail worker or someone that’s just trying to do their job.”

“People who don’t take personal responsibility for their actions, and everything that happens is someone else’s fault.”