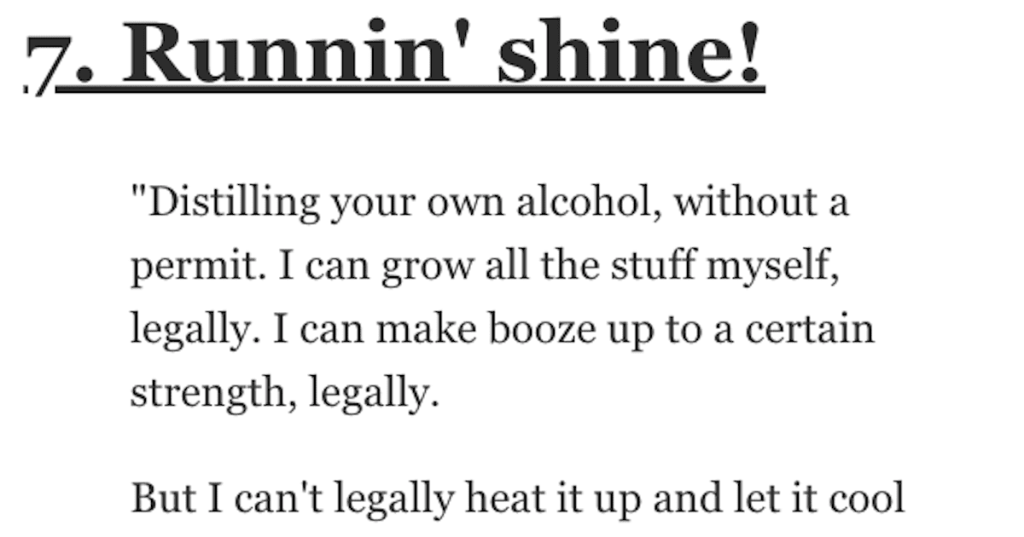 What Is Morally Okay but Illegal? Here’s What People Said.

You know what I think is completely fine morally but is still illegal in some places?

And I don’t even really partake in the devil’s lettuce!

But some folks out there act like doing it means you’re a criminal or a deviant or something along those lines.

Read on to see more things that people on AskReddit think are morally okay but illegal.

1. Could be gone forever.

“Dumping and uploading old game cartridges online. The original publishers don’t sell them anymore, and if we don’t preserve them in a digital archive they’re gonna be gone forever at some point.

There should be laws letting this happen, we can’t just watch out favorite games literally disappear and not do anything about it.

“In Massachusetts you can duel your friend to the d**th on Sundays but only if the Governor is present to observe.”

“Feeding the homeless in some places.

“Buying liquor on Sundays in many parts of the U.S.

They’re called blue laws and they’re still on the books in many U.S. states and counties.”

“Distilling your own alcohol, without a permit. I can grow all the stuff myself, legally. I can make booze up to a certain strength, legally.

But I can’t legally heat it up and let it cool down in order to improve the flavor and al**hol content, even if my only goal is to drink it myself, unless someone tells me it’s OK.

I’m not saying I want to make my own bathtub moonshine, but…”

“A doctor euthanizing a person (that is mentally stable) who has a terminal or quickly progressing illness.”

“In many states, showing an adopted person their own original birth certificate.

Or telling them who their biological family is.”

There is absolutely no reason they should charge monthly for one piece of software over a one time purchase.”

“In the Czech Republic: preparing a big pot of very tasty soup and giving it out for free to all people who are hungry in some cities.

“Buying beer at 6 in the morning.

I work nights, and sometimes I’d like to go pick up a sixer after a long shift, but I can’t because of these puritanical laws in this country.”