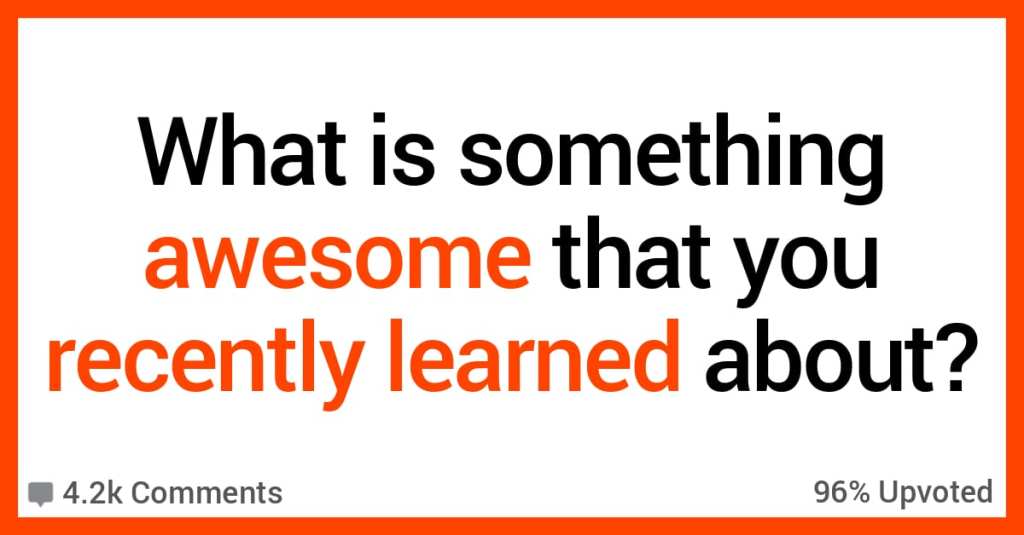 What Is Something Awesome You Recently Learned About? Here’s What People Said.

We should all strive to be open books.

What do I mean by that, you ask?

Well, I mean that we should all try to be life-long learners. Because knowledge is power and we should never stop trying to fill our heads with all kinds of information about all kinds of subjects!

It’s good for your brain! Trust me on this one…

Let’s get smarter with folks on AskReddit who talked about awesome things that they recently learned. Enjoy!

“The teeth of marine animals called limpets might be the strongest natural material yet documented.

Even stronger than spider silk, the previous record holder.”

“That applying lotion while still wet from the shower and air drying locks in moisture much better and is better for your skin.

I started doing this after I learned about it from a dermatologist and it is accurate, but it sucks to just stand there waiting to dry for so long.

So it’s not going to be for everybody.”

“I recently watched a documentary on Hitler’s nephew and how 3 out of 4 of his kids are still living and they made a pact to never have kids.

Was mostly about the nephew. Very interesting and gave interesting perspective that people don’t learn about.

For those wondering the documentary is The Pact on Netflix.”

“The USS Kidd, named after Admiral Kidd. He was often referred to as a pirate, he hunted pirates for the French, and was executed by Britain for murder of pirates.

There are also tales of him burying treasure. Because of this, the USS Kidd always flies a Jolly Roger, the pirate flag. This ship is the only one in the Navy authorized to always fly a pirate flag.

“Edith Wilson, wife of Woodrow Wilson, could be considered the first female US President.

After then-President Woodrow Wilson had suffered a stroke, his wife had stepped in to unofficially be the ‘acting President’, all while misleading the public and the President’s administration. S

he would go on to serve 17 months in this position, until the end of Wilson’s presidency.”

They are almost as tall as Manhattan NY is long.”

“I just learned how to make pickles from all the cucumbers I’ve grown in my garden.

It’s not as hard as I thought it would be. Not I get to experiment with flavors.”

“I learned that large fires, like the ones across the west coast, have their own weather system.

If the fires get large enough they can cause the weather to change and ever cause fire tornadoes.”

“How ice cream is made.

The salt basically prevents it from properly freezing and thus constantly edges it until it turns frothy and creamy.

Also, there’s a crazy number of cool techniques to use if you want your cream a certain way.”

“Taking a brain break during the day is super important

Even if you’re swamped, lay down for a bit, or go for a walk

A 1-hour walk/bike can really give you time to relax and organize the chaos in your brain.”

“Learning how apples are grown is really awesome.

Knowing that every single Granny Smith Apple in the world originated from one tree on a farm with a woman named Granny Smith.”

“George Sandy’s had one of the neatest lives in history.

Born in 1578, he was a translator and poet who also was friends with the king, was almost governor of Bermuda, took over command of Jamestown Virginia.

Made maps of the Mediterranean for Francis Bacon, wrote the first translation of Metamorphoses, explored the pyramids, and was one of the last people to be documented visiting the tomb of Alexander the Great.”

I’ve been getting sick of sitting around all the time and decided to try out jogging as a hobby. Lo and behold, it feels great!

Admittedly, I’m not exactly great at it, doing a mile in about 10 minutes, and my lungs feel like lead afterward, but I feel better than I have in years!”

“I have a half-brother I didn’t know about for 45 years. He found me through Ancestry.com.

Turned out my Dad has donated some sperm back in 1973, and “David” was the result. That’s not the weirdest part. It turns out “Dave” was a totally unknown mutual friend to me of a really good buddy who’d moved to a different part of the country, and so we met at a coffee shop and had a good laugh about all we had in common.

I gave him a picture of our father, who sadly passed in 2004, and I could tell it really meant something to him.”

In the comment, talk to us about some new things that you’ve learned about recently.