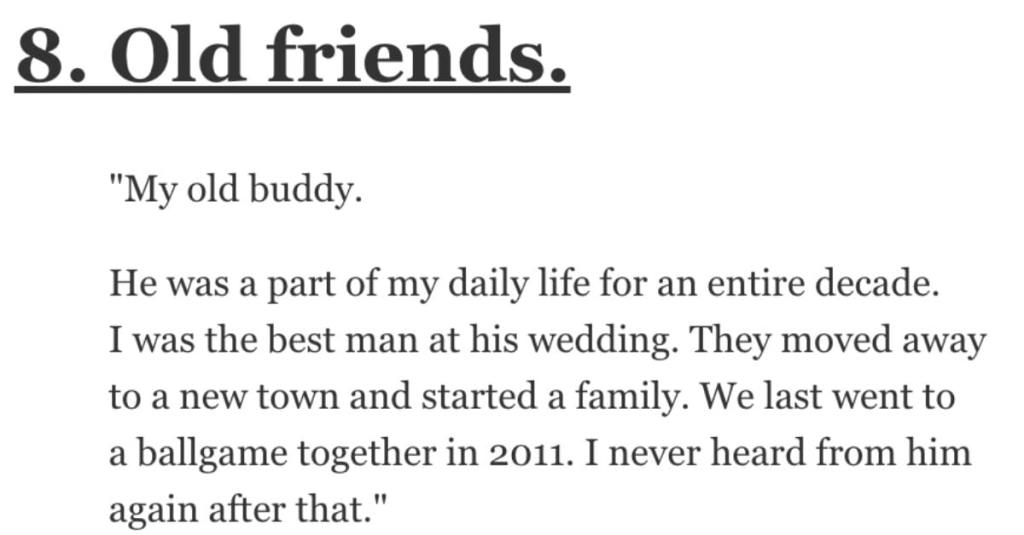 What Person Who Drifted Out of Your Life Do You Wonder About the Most? Here’s What People Said.

There are definitely people who I’ve lost touch with that I think about from time to time and I wonder what happened to them.

Girls I had crushes on, teachers I respected, people I never want to run into again…

What became of them? Are they happy?

Who drifted out of your life that you still think about?

We weren’t close friends, but he called me up in the middle of the night once to tell me he was going to k**l himself. He hung up on me and wouldn’t answer his phone after that.

I woke up my mom and convinced her to drive me to his house at like 3 am. He came out and was fine, he was just completely shocked I actually came to check on him. He was really thankful that I cared at all.

His home life was pretty crummy and he moved away to stay with his grandma soon after that. After he moved out of state we lost touch. That was 20+ years ago and I still wonder if his life got better. I hope he did.”

“When I was seven years old, I had a best friend named Shannon. One day she didn’t come to school, and nobody answered at her house when my mom called.

A month later I got a phone call from her and she said they had to go away and she missed me, then the call cut out like someone took the phone and hung up on her.

I never heard from her again.

I assume she and her family went into witness protection or something similar.

I hope they made it through and she grew up okay.”

“When I was a child and living with my parents, we rented our basement to a man named Hoon.

He was super nice to us and even tutored my brother and I in school. The coolest thing was that he was super into astronomy and every so often, he set up his telescope in our backyard to look at stars and the moon and invited us to look as well.

He became like family to us and when my parents decided to tear down our house and build a new place, Hoon came along with us to live in a temporary space until the house was built, and then moved back to our new house as our tenant again.

During this period, Hoon also drove my brother and I to school as we were not living within walking distance from our temporary space. After 1-2 years, one day my parents said that Hoon moved back to Malaysia and we never saw him again.

My then friend, who was another one of our tenants, told me that Hoon d**d and my parents were lying to me. I asked my parents about this but they said that isn’t true. I think my then friend was just messing with me. I always wondered why he suddenly moved and haven’t been able to find any online presence of him.”

“When I went backpacking around SE Asia I went with no particular plans. I ran into a Polish paratrooper my second day there who used me to get a couple of girls to go out for drinks with him (us) since I said “hey” to him earlier in the day.

He wasn’t going anywhere in particular either so we spent the next two months on the road going to 5 different countries. The guy was literally my brother for those two months.

We parted ways when I had to go to a country he couldn’t get a visa for and it was where I was to catch my flight home. We still talked daily for a few weeks and we were talking about starting a business then he falls off the face of the earth.

I’m positive his dad was a someone so he didn’t talk much about certain aspects of his life. He didn’t have any social media and he didn’t renew the domain he hosted his email on so no way of contacting him. Even friends who we met along the way frequently ask if I’ve heard from him since they wanted to connect with him again.

I keep hoping one of these days we’ll run into each other at a cafe or something by the waterfront having a beer like we did traveling.”

“Friend of mine in high school. We wound up working for the same place.

He started dating one of the women working there, and fell hard for her. (We were 18/19, she was 24.) When I say hard, I mean HARD. Every conversation would somehow get steered back to her.

After about three months, he says “We’re getting married!”

My mouth engaged before my brain and I said “You’re making a mistake.”

He was a little shocked. I backtracked and said that you haven’t known each other very long, maybe you should wait a bit longer, etc, etc. They didn’t, and did the courthouse wedding thing, and he dropped off the earth into wedded bliss for a couple months.

After those couple months, when the marriage had crashed, burned down, fell over, and sunk into the swamp, we were doing that guy bonding get-the-guy-who-got-dumped-drunk thing. He told me that I was the only person that told him not to do it, and he should have listened.

He started down some weird depressive spiral. Looking back on it, I think he may have had other issues. He’d call me late at night and ramble about weird s**t. The last time I talked to him, he called me at 3am rambling. He’d say something, and punctuate it with stuff like “YOU KNOW?? YOU GET IT?? DO YOU SEE??”

I hung up on him, because I wanted to sleep. Never heard from him again.

This was the late ’70s. I feel bad now, but back then I was a callow youth and had no idea what the hell was going on, or what to do about it.”

“I had a teacher in middle school who was awesome. Great teacher, loved her subjects (history and literature) and had the most awesome sense of humor.

A couple of weeks before the end of the school year, one of her children was k**led in a freak accident. I left the school at the end of that year and she left teaching entirely to deal with her own stuff.

I heard she returned to the school about three years later, but was a changed person (losing a child will do that to you, I’m sure). She stayed for two years, and then decided to return to the area of the country where she’d grown up, far from where I live.

I think about her all the time. She was a very influential teacher for me. I’d love to track her down and reach out to her, but she has a very, very common name and when I search it along with the state where she moved, I get hundreds and hundreds of hits. She’d also probably be in her 70’s by now, so she may not have any social media at all.”

“I worked with a girl back in my early 20s when I was still in the service industry. We would hang out pretty regularly. I had a bit of a crush on her. I really thought there may have been something there….

Anyways. She stopped showing up to work. Everyone just assumed that she had quit. She was a bit of a wild child. Moved around a lot and had a bunch of different serving jobs. So nobody really thought twice about it. (People just stop showing up all the time in that line of work.)

A few weeks later we found out that her family/police had been searching for her. Apparently she disappeared. Still think about it a lot actually. I’m guessing she’s dead. But you never know.”

He was a part of my daily life for an entire decade. I was the best man at his wedding. They moved away to a new town and started a family.

We last went to a ballgame together in 2011. I never heard from him again after that.

In that 10 years I was sure we would be friends for life. I did not expect that we would drift apart, but it happened.”

“I often wonder what happened to the girl that hit me with her car that icy night and took my leg.

It’s been over 25 years now and I don’t hold any animosity towards her (never did, it was just an accident).

I hope she went on to have a good life. Mine has had it’s ups and downs but I’m in the best place I’ve ever been now.

I’d just like to have the chance to reassure her that I’m doing fine.”

“She was a friend in like 3rd grade, and we used to do normal kid stuff, but we had great chemistry and we’re the best at making our own fun – inventing games with what was around us. Always sunny.

I haven’t seen her in 25 years. I wonder what kind of person she turned into.

Little weird things remind me of her when I see something we would make a game out of or the weather is like the summer we played outside the most.

Completely absent from social media and google results, but also had a challenging name to spell from memory.”

What person that drifted out of your life would you like an update on?