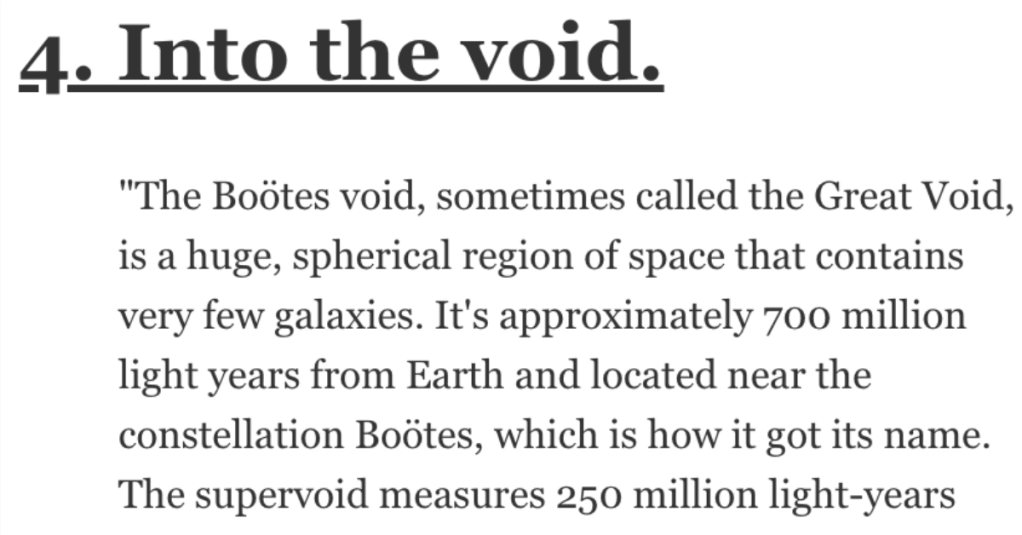 What Scary Science Facts Do People Not Know About? People Shared Their Thoughts.

It’s a fact: science can be terrifying.

But today we’re gonna get our minds blown.

Folks on AskReddit offered up scary science facts that most people don’t know about.

“There is a gravitational anomaly in space called the great attractor which is pulling everything within the Virgo and Hydra-Centaurus superclusters towards it. It lies 150-250 million light years from the milky way, which itself is being pulled towards it too.

The scary part is that relative to us, this anomaly lies within the same plane as our own galaxy making it very difficult to observe. Essentially, we have almost no concrete idea of what it is.”

“If your dog swims in a lake after receiving a spot on flea treatment – it absolutely decimates the invertebrate population.

A large dog swimming in 8 Olympic swimming pools worth of water soon after treatment will leech enough neurotoxin to k**l 50% of the lake’s invertebrate population within 48 hours.

There’s some awareness of this, but it’s not being taken seriously enough!”

“Scientific literature conclusion on Alzheimer’s disease and other neurodegenerative diseases in general is that the diseases start decades before the first obvious symptoms and that we need to treat them at this stage. When you exhibit obvious symptoms, it’s too late, your brain is already mush.

“The Boötes void, sometimes called the Great Void, is a huge, spherical region of space that contains very few galaxies.

At first, astronomers were only able to find eight galaxies across the expanse, but further observations revealed a total of 60 galaxies. Now, while that might still seem like a lot, it would be like stumbling upon ONLY 60 objects across a region larger than the continental United States (and that’s just in two dimensions).

According to astronomer Greg Aldering, the scale of the void is such that, “If the Milky Way had been in the center of the Boötes void, we wouldn’t have known there were other galaxies until the 1960s.” Looking at the volume of the Boötes void, it should contain about 10,000 galaxies, when considering that the average distance between galaxies elsewhere in the universe is a few million light-years.

But the question is….why and how this void came to be. There hasn’t been enough time since the universe began for mere gravitational forces to clear out a space of that size. There’s a theory which suggests that super voids are caused by the intermingling of smaller mini voids, like soap bubbles coming together.

But a more…maybe creepier…explanation is that the Boötes void could be the result of an expanding Kardashev III scale civilization. As the colonization bubble expands outward from its home system, the civilization dims each star (and subsequently each galaxy) it encounters by blanketing it in a Dyson shell. This might also explain why the void has such a nice, spherical shape.

Oh and we’re seeing a snapshot of The Void 700million years ago. A lot could have happened in 700 million years that we just cannot see/know due to the inherent speed of light.”

“Cancer geneticist here. Most cases of cancer that are sequenced generally just denote the prognosis or how long a patient has to live, rather than treatment options.

People always say “let’s cure cancer” however this simplifies cancer as though it is only one disease. It’s far more complicated than that. I studied at one of the largest cancer hospitals in the world where the motto is to make cancer history, but the only obtainable goal is to make it chronic.

We study and research as much as possible but every cancer requires different research, and unfortunately the powers that be often prohibit funding and proficient research. It’s work I am passionate about, but also a broken system that is infuriating to work in.”

“Anthrax can sporulate in dirt and stay viable for hundreds of years until the soil is disturbed and the spores inhaled.

There is a small island in the UK that was used as a test site for weaponized anthrax. It is still infective and you can’t go there without protective gear and permission.”

“Once symptomatic, rabies has a 100%* fatality rate.

The only options are the rabies vaccine and immunoglobulin therapy, which, again, must be administered before any symptoms.”

8. Something to think about.

GRBs are a rare phenomenon emitted from the poles of rapidly spinning supernova and hypernova. In the event of a direct hit from suitably close (which is actually really, really far), all life on earth would be wiped out.

The facing side would be annihilated instantly, while the trailing side would quickly d** due to the conditions on earth no longer being suitable to support life.
And there is absolutely nothing we can do about it.”

“The Cascadia Subduction Zone (CSZ) runs off the coast of northern California to southern Canada and ruptures about every 250-350 years.

We know this from the geologic record. The last rupture was in January 1700 and there are written records from Japan of a tsunami that resulted from the earthquake on the other side of the Pacific.

This zone is still active and is likely to rupture in the next 100 years resulting in a mag 9+ earthquake that impacts the west coast from northern Cali to southern Canada.”

Misfolded proteins that cause a cascade of protein misfoldings that lead to amyloid plaque buildups, resulting in uncontrollable neurodegeneration that is fatal in 100% of cases within two years. There is no cure.

It could in theory happen to anyone, at any time, and there’s no way to tell until you start showing symptoms, at which point you might have 18 months to live, if you’re lucky, the last 6 of which will be intensely unpleasant.”

We have lost a significant chunk just since the 1980s. I think it was around 20%? Mozzies are going up, because of course, but just about everything else is going.

Wasn’t until I read this that I realized that as a kid in the 90s I used to see butterflies all the time. Dragonflies. My house used to get invaded by Christmas beetles every year.

Not so much. These days I might see only one or two Christmas beetles in December, if any at all. When I was a kid I remember finding eight in my house in a single night… same house.”

“Everyone knows about scurvy, but the reason it’s so terrifying is usually less know.

You see scar tissue is not permanent, the process to build and maintain scar tissue is constantly ongoing. When you become vitamin C deficient your scar tissue starts being reabsorbed by your body. Opening up any and all old wounds. If you have ever had surgery those internal incisions will open back up.

Fortunately it doesn’t take a lot of vitamin C and it’s abundant in our food sources, but it’s still a little creepy that you could just start falling apart without it.”

In the comments, tell us some more scary science facts.