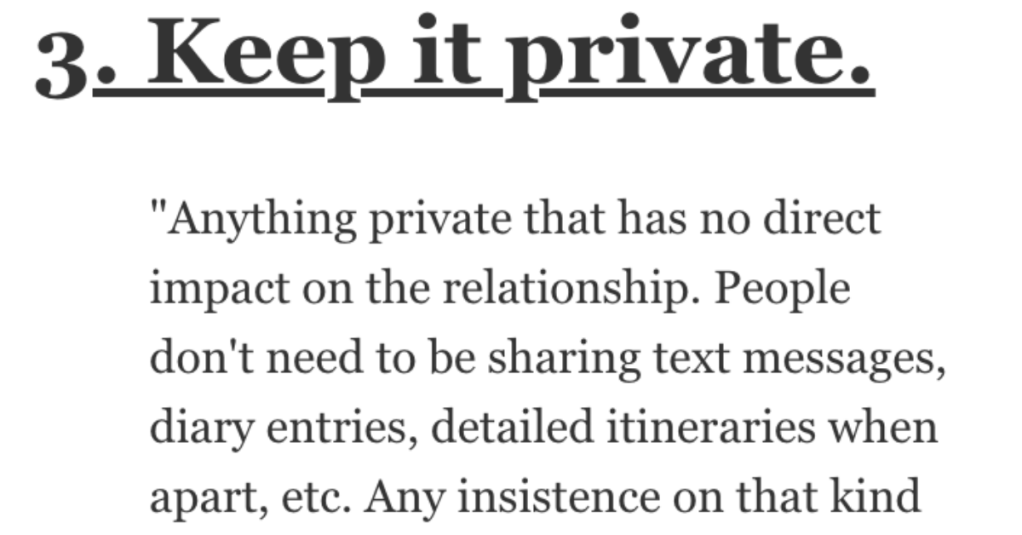 What Should You Keep Secret From Your Partner No Matter What? Here’s What People Said.

Some things are just better left unsaid…especially when it comes to secrets you should probably keep from your partner.

AskReddit users talked about what they think you should keep secret from your significant other no matter what.

“I’ve recently started dating a girl, and it’s one of the first relationships in which we haven’t been asking each other about each other’s dating history. It’s quite refreshing honestly.

I can imagine some things will eventually come up, but I do cherish the fact that neither of us is pressing for those details. It’s like we both get to start with a blank slate.”

“My ex used to always make little jabs about my appearance. I think he thought that those were things I didn’t realize were ‘wrong’ with me and that I would correct them if they were brought to my attention.

Every single comment is burned in my brain and did nothing but make me more self-conscious. My current partner never ever makes negative comments about my body.

And when I point out my own flaws, he always spins them into something charming and unique about me. It’s really nice.”

“Anything private that has no direct impact on the relationship.

Any insistence on that kind of sharing is paranoid and unhealthy. Trust is important as is understanding people may still need their space regardless of relationship status.”

“What a loser you were in previous relationships.

You’ve grown since then and have become a better partner and person.”

It’s not my business because it’s not my money, but geez, he sure does buy some stupid shit we absolutely don’t need.”

“When you’re going to propose. My brother and his now fiancée, who I love as a couple, picked the day and time.

He had a camera guy there and everything. It was super cool, but if I told my girlfriend when I planned on proposing and how I was going to do it, I know it’d take away from that special moment.”

“Peeing in front of your partner? Fine.

“Criticism of any kind just be careful with.

I have a family member who tends to be very critical of his wife, and I can just see how it erodes her confidence and their bond.

In front of people is even worse, but even in private, telling your partner there is something wrong with them should be rare and only when it’s actually important.”

“My wife and I have been married for 40 years, and over time, you just naturally learn what topics to avoid and what issues you will just have to agree to disagree on.

My wife and I are of different religions: I’m basically agnostic, and she is fairly religious. I have just learned over time that she is not going to change her feelings about her religion to suit me, so I have no other choice but to just accept it. Basically, we rarely discuss religion because there is usually no need to.”

“My then-boyfriend and I went to the jewelry store to look at rings, and I picked out one I loved. Several months later, he proposed to me with a ring from that store, and it was the wrong one.

I still liked it, but it wasn’t the one I really wanted. I couldn’t bear to tell him. We’ve been married 15 years, and he still doesn’t know and never will.”

“I’ve broken up with partners who insist on going through my phone and private accounts such as email and social media.

I used to date someone who was very controlling when I was young, and it was awful. I will never tolerate that again.”

“This is a really subjective answer, and I’m sure people will disagree, but for me: bathroom time.

I’ve got three kids, and one of them is my full-time responsibility as her mom isn’t around. I live and breathe for my kids, and I love them, but doing my morning and evening bathroom events, I really love the solitude.”

Do you have anything to add to this conversation?