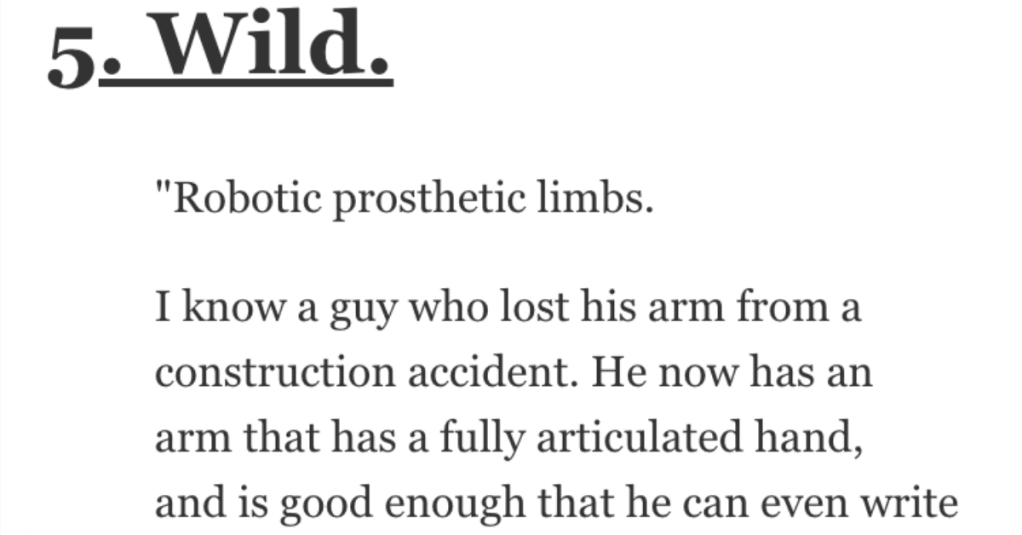 What Sounds Futuristic but Is Happening Now? People Shared Their Thoughts.

People are flying into outer space, we have contraptions in our pockets that give us all the information we’d ever want to know, and that’s just the tip of the iceberg.

Back when I was first diagnosed I had to pee on a stick and match the color up to colors on the vial to see approximately what my blood sugar was a couple hours ago.

Now I have an anamatronic fish that tells me what my sugar levels are and I don’t even have to prick my finger! We truly are truly living in the future.”

“CAR T cell therapy.
They take the t cells out of a cancer patient. They train the cells to k**l the specific type of cancer that the patient has and then they put them back in.

This therapy doesn’t work 100 % of the time, but when it does it does miracles.”

“A program that is able to generate almost any (!!!) photo using short text input. A San Francisco street? Done. Avocado chair? Yes, why not. A photo of buildings of Poland? YES, it can do that.

It can generate almost any stock photo you can imagine, like any any, you can add parameters, lighting, ask to specific picture in the room… It uses 12 billion of pictures and descriptions to do this.

There are two downsides of course: the first one is lots of lots of computational power. The second is that the program is losing the track after few parameters. Also it can do only 100×100 pixels at the time but it will change fast.

It’s called DALL-E and was premiered this year. It’s an AI made by OpenAI. Terrific and amazing at the same time.”

“I’m fourth generation of an excavating company and some of our surveying techniques now are unbelievable. When we started in the 1960s you used a contraption called a theodolite and prism (a fancy level used to measure the distance and elevation change of the prism).

One of the fondest memories I’ll ever hold happened two months ago shortly before my Grandpa (the founder) passed away. I showed him how to survey a 30 acre site with a drone in about 45 minutes (all automated), something that would have taken a crew well over a week in his time.

I then took the data, had it processed, and showed him the prints of the site right on site with my laptop. He cried.”

I know a guy who lost his arm from a construction accident. He now has an arm that has a fully articulated hand, and is good enough that he can even write with it, though not very well.

He said its worth about half a million dollars, and also it has done wonders for his ability to hook up with women. I guess a lot of people are curious and that starts off the conversation.”

“Being able to control objects with your brain.

I know it’s still in its infancy but the fact that we can even attempt do stuff like that is crazy.”

“The rover splitting carbon dioxide, creating about 10 minutes’ worth of breathable oxygen…on Mars.”

“I was born in the early 80s, so practically everything. I literally own most of the sci-fi gizmos I saw on tv as a kid, or even cooler versions of it.

Virtually all medical news is mind-blowing. CRISPR/Cas9. Research into telomeres and anti-aging, nanotechnology is actually real…

Self driving cars are kinda already around but are getting better all the time.”

“If you think about it, microwaves are actually insanely futuristic.

Easily heat up food within literal seconds vs waiting 20 minutes for an oven.

Spies can listen to conversations from a very long distance using various technologies, such as bouncing a laser off an outside window to pick up on tiny vibrations, or installing a special light bulb that flashes at certain frequencies that only a special receiver can pick up and translate into a conversation.”

“mRNA vaccines are being created for malaria, cancers, a universal flu vaccine.

All kinds of previously incurable illnesses are about to be history.”

What is something that you think is futuristic but is happening right now?