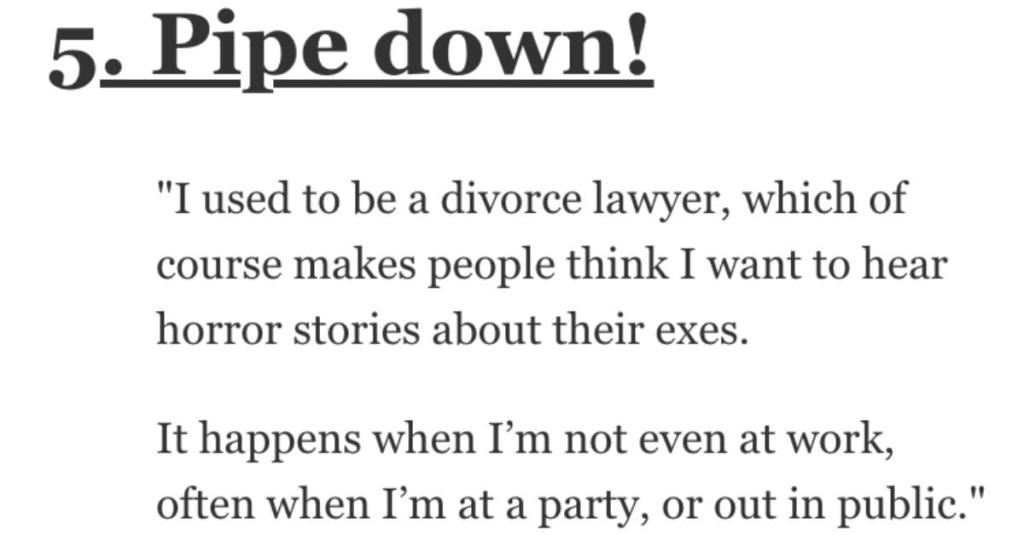 What Topics Make You Want to Say, “Ugh, Be Quiet!” People Shared Their Thoughts.

The possibilities might be endless for this question because we’re all so different.

But that’s what makes the world go ’round, friends! Different strokes for different folks!

What makes you want to say “shut up!” to people?

“My neighbor will not speak to me unless he is explaining the history of the state of Louisiana in its entirety.

I’m not even sure what they’re supposed to be influencing. I only ever see them hawking cosmetics or some diet thing, but that’s it. I never see them pushing something that would be actually influential in my life.

So either they’re all pretty much useless, or the algorithms on social media aren’t spying on me enough.”

I got some special shake powder that’ll make you feel much better! PM me for details!”

“”In these trying times we al-”

“I used to be a divorce lawyer, which of course makes people think I want to hear horror stories about their exes.

It happens when I’m not even at work, often when I’m at a party, or out in public.”

“When I’m talking about something I’ve done or bought and the other person has to try and one-up you constantly.

I have recently started replying with ‘of course you have” if they start bragging about something they have done or own that is soooo much better than my example.

Usually these people don’t quite get the sarcasm.”

“If someone goes “WHY AREN’T WE TALKING ABOUT THIS?” I just naturally assume now that the topic they are referring to is extremely specific to their life and in no way impacts me.”

It’s weird people care what complete strangers are doing with their life when they couldn’t care less of yours and who you personally are.

“When my students start rambling about whatever half-baked, crack-pot half-truths of history that they got from FB/Twitter/whatever, that they believe is the gospel truth.”

Anything about the “royal family” frankly.”

“I majored in political science and trust me, this is almost always my response when someone wants to “talk politics” with me. The vast majority of the time talking politics just involves hearing someone recite to me the talking points they heard from their favorite media personality.

And it is rarely a honest dialogue. In most political conversations people are just thinking about how they are going to counter what the other person is saying. There is rarely an attempt to actually listen and understand where the other person is coming from to reach a consensus, it is often just a quarrel that feeds on itself ad infinitum.”

Honestly I dont give a s**t how or why person A doesn’t get along with person B because person C has done or said something.

STFU its a job, grow up and start doing what you are paid to do. Outside of work you can beat each other up all you want.”

What topics really get on your nerves?