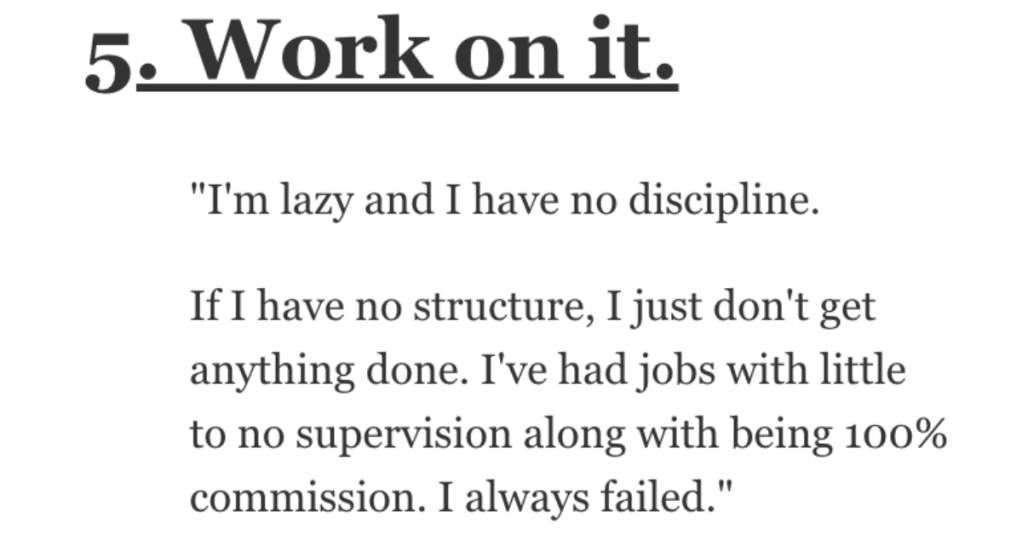 What Truth Do You Not Like Accepting About Yourself? Here’s How People Responded.

I know that there are definitely hard truths about myself that I have a hard time accepting, but I’m not brave enough to share them online…or maybe with anyone.

But the folks you’re about to meet all went on the record and poured out their souls on Reddit. So maybe their responses will give us some encouragement to examine our own lives and come to peace with some things…

Here’s what folks on AskReddit had to say about truths they have a hard time accepting about themselves.

“My fear of being judged in a situation suppresses my genuine thoughts about things, and it can make me awkward, unfunny or seem like I’m trying way too hard.

It’s like all social interactions have some sort of performative aspect to them, and that thought is constantly broadcasted on some primal level of my consciousness. It causes me to cringe at myself before I even do anything.

This typically occurs when I’m around anyone I’m uncomfortable with, and if I do forget about it, and something suddenly happens to draw my attention back to the meta of a given social situation, the feeling tends to double down.

I’m not even antisocial (which makes it worse because I genuinely like being around people), but it sabotages a large amount of interactions for me and makes it hard to make friends.”

“I don’t treat my body well

And I have a lot of crutches that will impact me later in life.”

“I’m constantly plagued with the idea of fearing failure

But I am then constantly being lazy and then panic when I see others moving ahead.”

“I am a very overbearing person.

I don’t trust many people, I don’t even like many people, but the few I do like, I find it very difficult to not try and involve myself in E V E R Y part of their life, and get upset when they don’t like that.

I like to tell myself (and them) that it’s because I care, and want the best for them, and for them to be happy, but I do understand how overbearing and annoying that can get.”

“I’m lazy and I have no discipline.

If I have no structure, I just don’t get anything done. I’ve had jobs with little
to no supervision along with being 100% commission. I always failed.

But if I have a job that I have scheduled tasks that must be met, I crush it.”

“I can get emotional over stupid things.

I try not to and I recognize it happening but feel out of control over it.”

“I am not special or more talented than anyone else.

I am literally more or less average.

“I give up very easily.

I used to be a great student in school not just with studies but everything else as well because I’m a fast learner. But that didn’t teach me the value of hard work because everything came easy.

Everyone likes to think they’re so smart because they can see inside their brains and see, with no interference, all their great and original ideas and thoughts.

But in general, the majority of people I meet, are substantially smarter than me. Not in terms of volume of knowledge, or learned skills, just in that they are better at thinking through things logically, better at problem solving, and more reasonable.

There’s nothing I can do about it, but I do miss my 20s sometimes and I know I can’t ever be that again. That is rough to have to accept.”

I can be friends with someone for years and then they move and within a day it’s like they never existed for me.”

“It’s not my fault that I had a terrible life, but it’s the only one I will ever have and I often struggle to come to terms with the fact that I’ll never get to say I had a healthy childhood, teenage years and early adulthood.

I ended up being very messed up and I envy the people who had it good or at least decent.

I’m fine now, but I lost it on things you go through just as a kid, and it’s hard on me.”

“I need validation and to be told i’m doing good.

I never had any issues with it growing up, but it feels good now to know im doing a good job or the right thing, but i still feel ashamed for wanting to hear it so often.”

“I sh*t talk my friends way too much.

I’m actively trying to think before I speak now because I’m so quick to judge them.

If they’re happy, why the hell do i care enough to talk behind their backs?”

In the comments, tell us some truths about yourself that you have a hard time accepting.