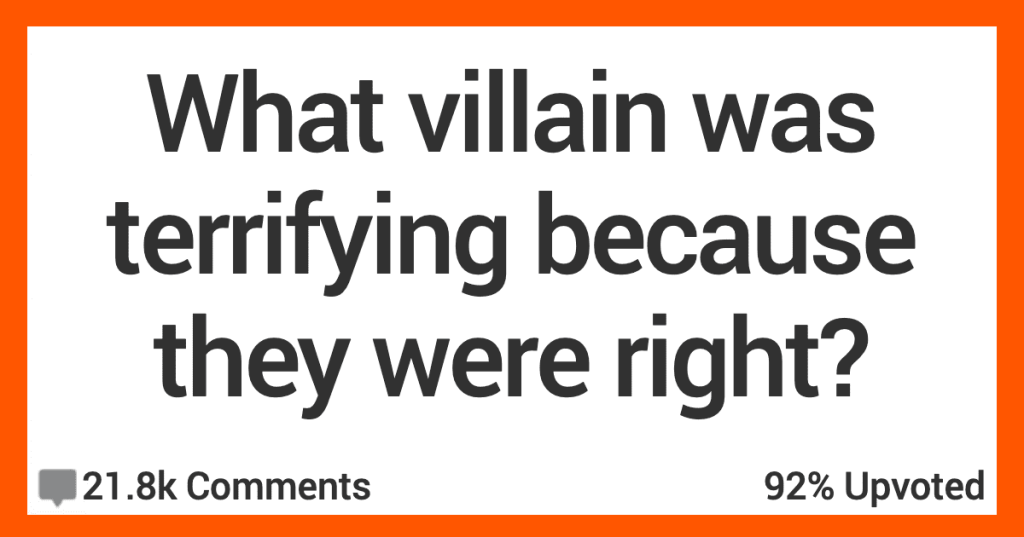 What Villain Was Terrifying Because They Were Right? People Shared Their Thoughts.

Are you ready to hear about some villains today…who were RIGHT?

Yes, that’s the topic of this article from the AskReddit page and it elicited some very interesting responses.

Take a look at what these folks had to say about this.

“Magneto is my favorite villain of all time.

Every time his motives are brought to light I get that “yeah, I kinda get it” moment.”

“Mojo Jojo from the Powerpuff Girls. He wanted to bring free energy and advanced technology to the people.

And in one episode he actually did. He made the world an amazing place. And then the Powerpuff Girls ruined it all.”

“The sharks from Sharknado.

Can you imagine you’re just swimming around, minding your own business, then all of a sudden a tornado picks you up out of nowhere, drops you on land, and now you have to deal with Tara Reid?

Yeah, i would start biting people too.”

“Mr. Wilson from Dennis the Menace.

The live-action movie has one of those random scenes you see as a kid that sticks with you your whole life: Mr. Wilson has been cultivating this flower that takes like 40 years to bloom and then d**s in ten seconds.

At the moment it’s going to bloom, Dennis causes a ruckus and Mr. Wilson misses the blooming he’s been working his whole adult life for.

Looking back, that’s like one of the most disturbing moments I’ve seen on film, partly because it gets more relatable as I get older. I mean, d**n, 40 years…”

“Stevie from Wizards of Waverly Place.

Her entire goal was to stop families from giving up their magic to just one person in the family.

Like…we’re really supposed to be rooting against her? It just seemed super out of character for Alex to go against that plan.”

“Ken from The Bee Movie.

I too would go absolutely berserk if a talking bee stole my girlfriend and gaslit me into thinking I was crazy.”

They’re villainized for not letting their high school daughter date her teacher?”

“Colonel Kurtz. “We train young men to drop fire on people, but their commanders won’t allow them to write “f**k” on their airplanes because it’s obscene.””

“The Replicants from Blade Runner.

Used as slaves and given artificially short lives.

They just wanted to live and be free.”

“King Kong. Not even because he was right. He was just alive.

Minding his own business and blam….taken out of his home and made to be the villain without any choice.

“The mom in Mrs. Doubtfire.

Something you don’t understand as a kid watching it but totally get as a parent.”

“The Reapers from Mass Effect, in the original BioWare ending before EA changed it.

All they were trying to do was stop advanced races from using so much dark matter that they wiped out all life in the galaxy before other races were allowed to come along.

If it wasn’t for them, humanity wouldn’t just not exist, but every species in the entire cycle, every species in every cycle, everyone would have died as the stars went out, this horrific fast heat d**th event, over the course of a few thousand years… Except a small group of Leviathans, in the early days of the Universe, realized what was going to happen, and sacrificed their entire civilization to save all future life in the galaxy.

And when Shepard destroys their ships in the third one? Every one of those ships is a museum, a living record of every previous civilization, and they’re destroying the only thing that was able to be left from them. To fight the reapers is to fight against everyone who has ever lived and everyone who ever will live.

The reapers don’t just have a point, they’ve saved more lives than we can even fathom. Their only flaw is that they were never able to find a solution that was better than wiping out civilization every few thousand years and preserving whatever they could find.”

Can you think of some more villains like this?