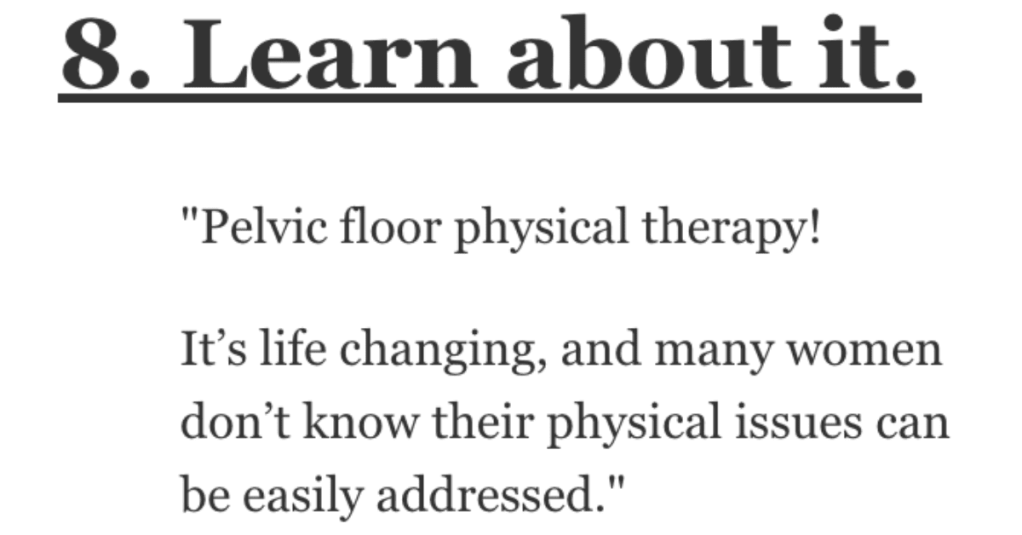 What Women’s Issues Are Often Overlooked? Here’s What People Said.

We’ve made a lot of progress in regard to women’s rights and highlighting women’s issues, but I think we can all agree that we still have a long way to go.

And the responses you’re going to read today might cause you to look into some different subjects and have them on your radar, which is a great thing.

What women’s issues are often overlooked?

Folks on AskReddit shared their thoughts.

“Hysterectomies. I am 24 and have reoccurring fibroid tumors and have since I was a teenager.

It’s not typical for someone my age to have multiple and large fibroids. My largest one was 11cm. They are painful and I’m about to have my second surgery to remove them. I don’t want to keep doing this over and over and would like to have a hysterectomy, yet my surgeon refuses because I’m young and “might want children.”

If I get pregnant, I have a high risk of miscarriage. It will eat me alive if that happens to me.”

“Oral contraceptive birth control pills can cause depression and very often do.

The depression and anxiety of PMDD are debilitating.”

“In my country it’s after birth care for mothers. Mental health system is f**ked. Woman are told the pain they are feeling is “normal” only to find out they need a stoma bag a month down the track.

Some women have d**d after not being checked over properly before leaving the hospital. I don’t even live in a 3rd world country either. People are wanting to move here because of how we’ve handled COVID.”

Postnatal pain ? Normal, what did you expect?

Hey, guess what, you can have painless periods and symptoms-free pregnancy, they just can’t be bothered to help you.”

“The lack of actual education about your own body.

Like I didn’t even know I had 3 holes until I was 16 and I learned it from an episode of Big Mouth.”

“Having a decent career, education, friendships, hobbies and being financially independent only to be asked if you’re married and “aren’t you worried about time running out.”

Saying ‘no I’m not interested in marriage or kids’ is met with a shocked reaction. Thought this attitude d**d out years ago but it has not.

Getting told to ‘smile sweetheart.'”

7. Never got an explanation.

I don’t know about other women on here, but I never received an explanation of what a Pap Smear does/tests for or why it’s so important to get done at the proper intervals. I had three abnormal paps in a row and my old GYN didn’t bat an eye.

I just got a new doctor and she insisted on doing a punch biopsy/colposcopy and it turns out I have HSIL, which has a pretty high likelihood of further mutating into full blown cervical cancer.

I’m now facing a cold knife conization or LEEP procedure because my old GYN didn’t care enough to look into why my pap smears were abnormal.”

It’s life changing, and many women don’t know their physical issues can be easily addressed.”

“The fact that in many Middle Eastern countries, women are still second class citizens.

My friend is Iranian and if she’s r**ed she’ll need 5 male eyewitnesses, but if she k**ls her attacker she’ll be e**cuted…”

It took me 3 ER visits and a walk-in doctor to diagnose a raging infection in my abdomen. I was told it’s all in my head???

By the time it got diagnosed my bowel had almost perforated. I could have d**d if I was less tenacious.”

“I’m a dude and I H**E the fact that when I’m doing something with my long-time gf like buying a new car, renting a new apt., taking a loan etc. that people ignore my gf and assume she is just not important.

They just look at me and talk only to me. I have to make an effort to include her in something she should be in from the start. I feel so bad for her and try to amend it as much as I can, but there is not much you can do.

We were at the car dealers the other day looking at the car and the dealer kept ignoring her and her wishes. He was only looking at me and assumed she doesn’t know what she is talking about. We just left.”

“How bad some of the negative effects hormonal birth control can be.

I was losing my mind, but my doctor brushed it off saying I was just stressed.

Got off it, and instantly felt so much better.”

What women’s issues do YOU think are overlooked?

Speak up in the comments!