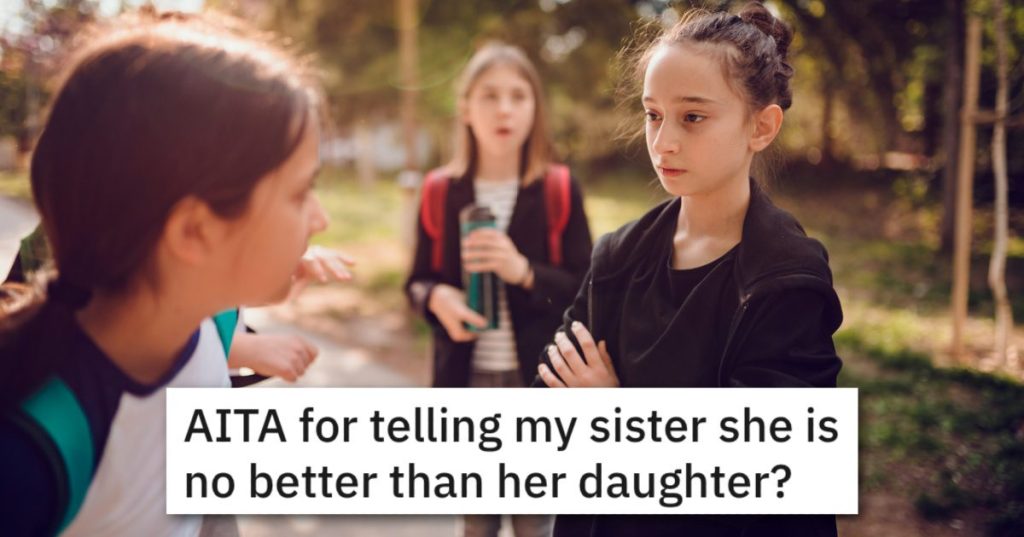 What Would You Do If Your Niece Was Bullying Your Son And Your Sister Didn’t Care?

Bullying is no joke, y’all, but the sad fact of the matter is that even adults sometimes don’t take it seriously. Too many people have the idea that “boys will be boys,” or we survived mean comments in school and so our kids will true, but reality is that the world our kids are navigating is totally different.

This man is a single father raising a boy on his own. Like most of us, he’s doing the best he can with the information he has, and he figured that moving to be closer to family might be the right move.

They did that, and now he attends school with his cousin, just a year older, and seems to be making friends and settling in.

I(45M) have a son(10M) that loves the show MLP (My Little Pony), He has a few toys, some t-shirts, and posters from the show. We moved recently due to a new job and want to be closer to the family.

My ex is not in the picture due to personal reasons. It’s been hard raising my son as a single father, but I am doing my best. I love my son and raising him to be respectful to others.

My sister(48F) lives about 15 minutes away. We were really close growing up, but my sister never approved the idea of me raising my son alone.

Son is attending the local school and loves his new friend group. My niece(11F) attends the same school as son.

That is, until his cousin and her friends began bullying him for his affinity for My Little Pony merchandise – even going so far as to break his favorite toy and throw it in the trash.

I have been receiving calls from school that my niece and her friends have been bullying son and his friends. He likes to bring a pony toy with him to school to keep in his backpack as it makes him happy.

Son came home crying from school that niece broke the toy and threw it in the trash.

OP demanded a meeting with his sister and the school, but afterward learned that his sister didn’t think it was a big deal.

Not only that, she and his parents think he’s being a bad father by allowing his son to have anything to do with a “girl” show in the first place.

I was furious and scheduled a meeting with the school and my sister. My sister thinks it’s them goofing around and having fun. Counseling was suggested and my sister thought the idea was ridiculous.

When we were leaving, my sister pulls me aside and says maybe you should have son watch something more appropriate for boys. If he had a mother figure, there wouldn’t be any issues. I look at her and say you aren’t any better than niece.

My sister was shocked at my response and my parents reached out to have a stern talk with me about my son’s interest in a girly show. They also suggested that I apologize to my sister for my comment.

OP wants to know if he’s wrong for telling his sister that she’s wrong and a bully herself and whoo boy, I’m guessing they’re going to have plenty of thoughts.

The top comment points out that the kid isn’t hurting anyone, and now the adults and jumping in on the bullying, too. Not cool. 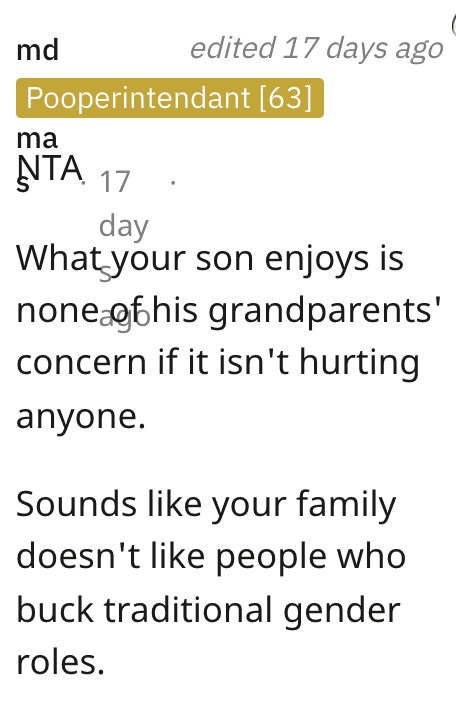 They love that OP is standing up for his son, and also that there are men out there who can realize that traditional gender roles are for the birds. 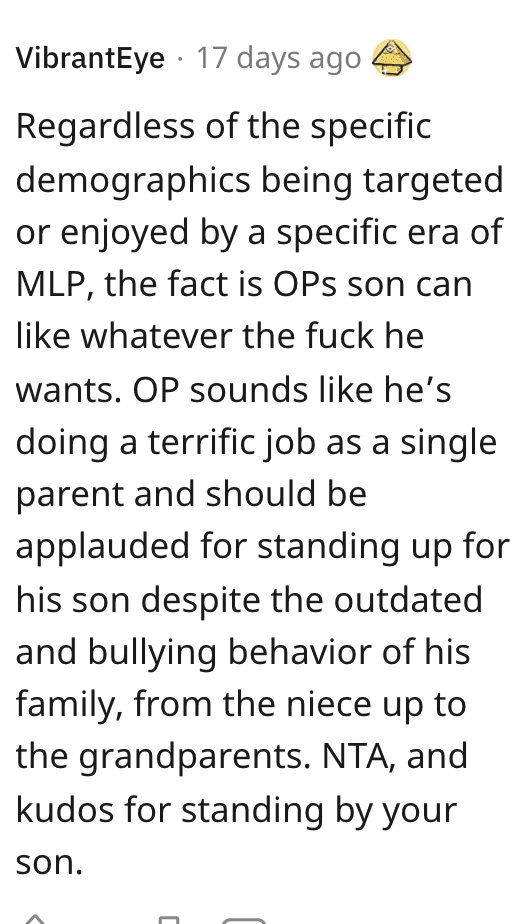 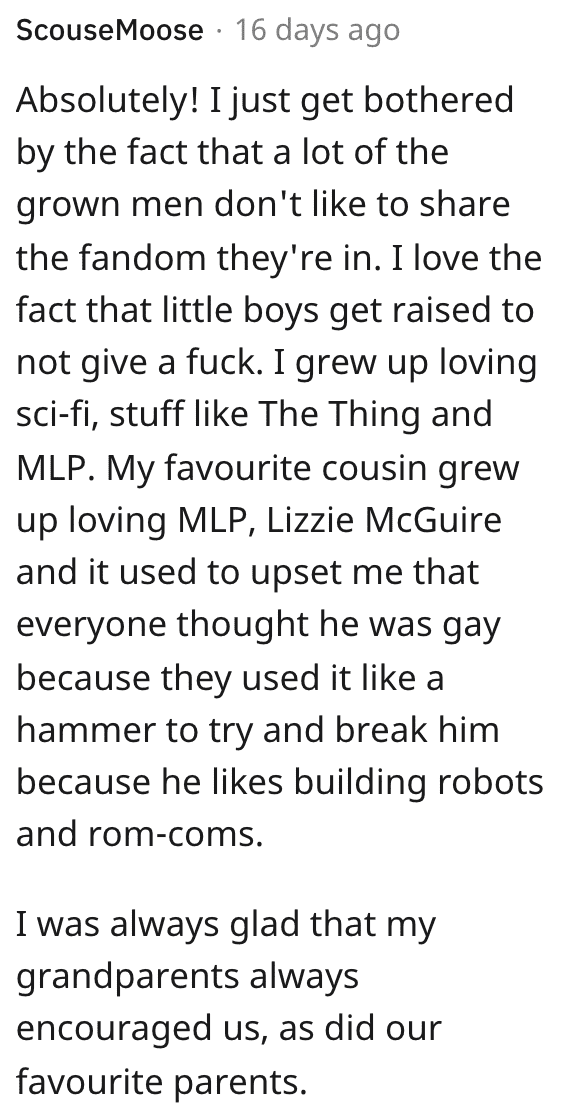 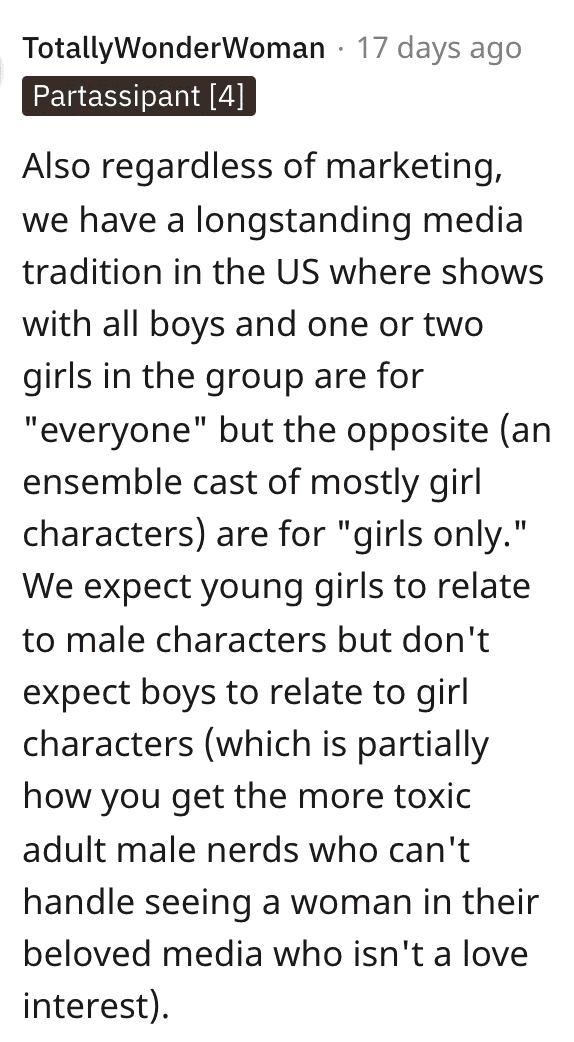 Misogyny is harmful for everyone involved. 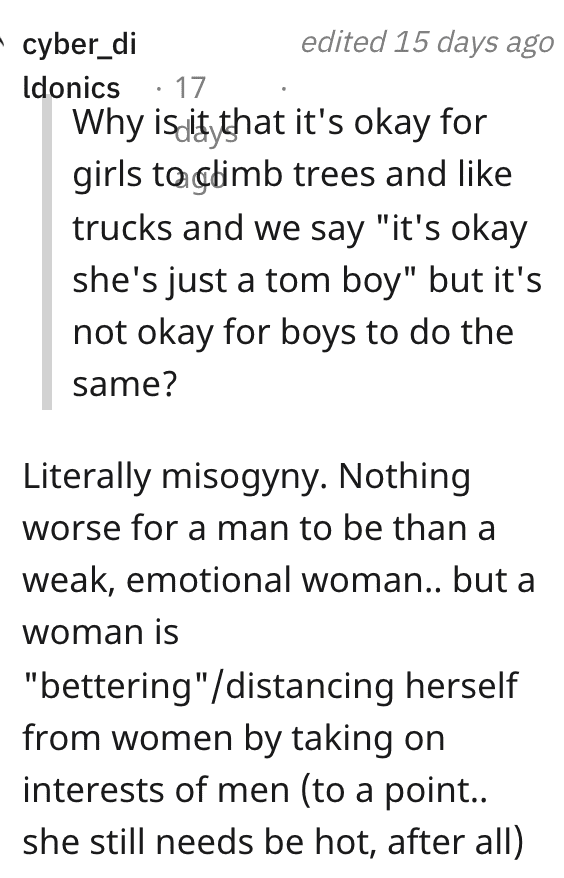 This post honestly made me so mad and I want to give both OP and his son a big ol’ hug.

How would you have responded to your sister and your parents? Would you have been so diplomatic? Sound off in the comments!