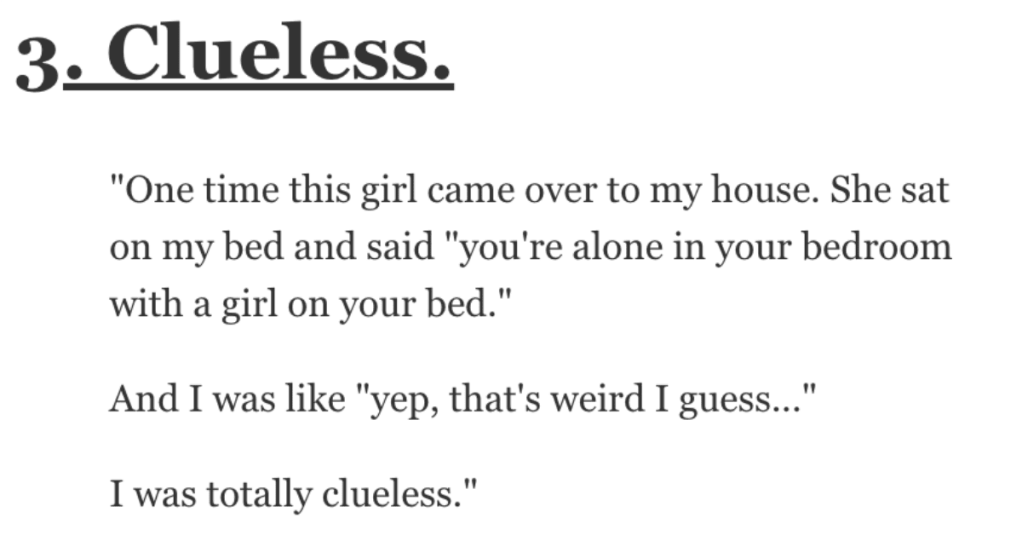 What’s a Clear Sign That Someone Liked You, but You Didn’t Realize It?

You had one chance and you blew it!

Yes, I’m talking to you…and I guess I’m talking to myself too, because I’ve definitely had times in my life when I wasn’t picking up on signals from a lady and then I realized later that they were interested.

ANYWAY, let’s take a look at what AskReddit users had to say about missing out on those important signs.

“My mom always told me to marry this one girl from high school. I told her about it and she was like “oh…wow that’s totally crazy right?? Would that ever happen?”

And I was like “no, we are too good of friends!” Girl was like “so not even a chance??” Didn’t realize she was crushed until college.”

“She yelled “date me” after I walked away from her one time.

I thought she was joking.”

“One time this girl came over to my house.

She sat on my bed and said “you’re alone in your bedroom with a girl on your bed.”

I was totally clueless.”

“We were watching TV at her house just us on the couch and some character in the show said something I can’t even remember now and she said to me “if we ever have s*x, that’s how I’m going to describe it”.

I think I just chuckled and said “oh really?” and that was pretty much it. We hung out a few more times and didn’t do anything and eventually she ghosted me and moved to another town.

I wish I were joking.”

“Dude here, roommate had introduced me to a woman who said she wanted to get to know me.

On several occasions we’re in the backyard, watching a movie and having a bonfire, she’s got her legs across my lap, her one arm across my chest, and the other behind me, her head on my shoulder looking at me with the most obvious “kiss me” eyes anyone could have.

My dumb *ss decides to ask “What? Why are you looking at me like that?” and goes back to watching the movie.

Now engaged, with a kid. Her of course, not me, to a guy who knew the signs….”

“Girl lived across the hall in my college dorm.

She came over in just her new push-up bra to see what I thought of it.”

“This was way back in high school a good twenty years ago: she asked me and my buddy to walk her to her car, and while we were walking, she sidled up to me and grabbed my hand. We walked hand in hand all the way to her car.

She said she’s gotta go home or something…and so naturally I said something like “ok, drive safe!” and then amble away like a f*cking carrot.

My buddy is looking at me dumbfounded. Slackjawed. He chewed me out good: said something like “what is wrong with you??” I assured him that friends often hold hands, and it probably didn’t mean anything. If she reads this: sorry for being such a dunce.

A different girl, a couple years older than me, asked me to the prom…and I basically said “nah, I don’t think I’ll ever go to the prom”. I was certain she wanted to go as friends. That one I did realize and apologize for, because a friend of hers confronted me later saying it was humiliating.

I was, and remain, completely oblivious to human interaction sometimes.”

Yea, my bo*bs are big, you can grab them, i wouldn’t care…

“I was at a high school dance. I really wanted to dance with my crush and was preparing to ask her.

Then a girl from her group of friends came to me and asked me for a dance. I danced with her and then she casually asked me who I had a crush on(we were friend so it wasn’t weird). I procced to tell her.

When we finished dancing I asked my crush. She said no in front of all her and my friends. I cried in the bathroom. When i composed myself i went and enjoyed the night further.

I had noticed the girl i danced with first was crying but i didn’t think much of it because i was with my guy friends at the time. Thinking back i realized I crushed her heart.”

“After work, she needed a ride home. I let her drive my car because she wanted to drive a stick. She drove me to some secluded spot that only could have been described as makeout point.

I had to be somewhere, so I drove her home. Yes. This is all real.”

“My boss’s face became RED and had the biggest smile ever when I talked about inviting her to the dinner I was going to have for my birthday. She also became extremely sad when I said that I liked another woman.

It wasn’t until I stopped liking the other woman that I realized that my boss liked me. Worst part is that the other woman didn’t care for me in that sense at all(she is still a good friend though).”

“She asked to bake brownies with me. She sent me bikini pics and a side bo*b pic showing her new tattoo. She asked to make chocolate covered fruit with me.

Called me to go out to eat with her on campus multiple times. I thought she was just being a nice friend

Update: We are actually engaged now 🙂 “

“There was this Domino’s Pizza stand at the community college I went to. Nothing fancy, they just had a couple pizzas in hotbags below the counter and would charge like $2 a slice, then pack it up and leave when they ran out.

Anyways, this pretty cute girl was usually working it, and I’d sit at a table right in front of it because there weren’t usually a ton of people around and I could play on my phone or do homework. Of course, I’d get a slice of pizza or two and eat while I sat there.

We ended up chatting every day I was there. Just shooting the sh*t, nothing special. After a while she started throwing an extra slice on my plate when I ordered and eventually she stopped charging me at all. Of course, my young, oblivious self with no self-esteem was just like, “Sweet, free food and someone to chat with!”

Towards the end of the semester we were talking one day and she told me that they weren’t gonna be doing the stand the following semester. I was just like, “D*mn, that sucks” and asked her what was gonna happen. This poor girl practically begged me to make a move, but I was just too f*cking stupid to see it.

I was talking about the pizza stand with a buddy of mine YEARS later who started at that juco after the stand was gone. I was telling the story and my interactions with this girl and was like, “Yeah, she was super cool and used to give me free pizza-” and I stopped mid-sentence and looked at nothing in particular and said, “Oh my god she had a crush on me.”

If you’re out there, Northwest MS Domino’s girl, I am so sorry I was so dense. It wasn’t anything against you, I’m just really dumb.”

Have you ever totally missed signals from someone who liked you?

If so, tell us your stories in the comments. Thanks!