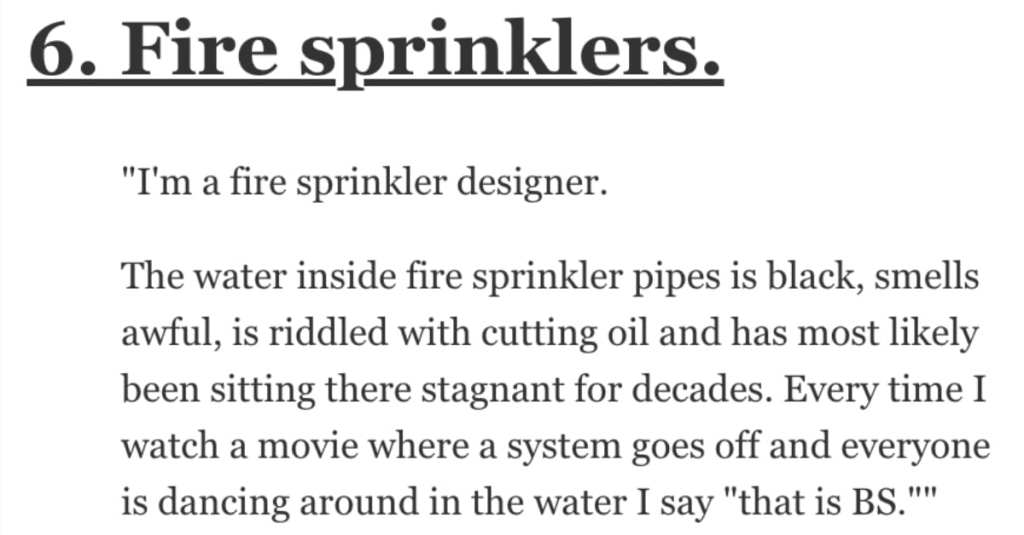 What’s a Weird Industry Secret That You Discovered While Working? Here’s What People Said.

One good thing about working different jobs throughout your life is that you learn a lot of insider information about various industries.

Sometimes that can be great and other times…well, you feel like you’ve been let in on some dirty little secrets…

“Worked as a software dev for Carfax about 9 years ago.

Their software for producing history reports was so fast (could get a report in less than 10ms) that users didn’t believe it actually “crunched the data” so the frontend team added a fake progress bar that waited a short random time.

I believe this fake bar is still there today.”

“Worked for a car dealership for a short while. Had no idea they are legally allowed to mark up the interest rate that the bank offers.

The dealership gets to keep the difference between what you’re paying and what the bank actually approved you for.”

“I worked for a supermarket for a while.

They used to review CCTV and if they spotted someone stealing they would take a screenshot, then print the photo and hang it on the wall in our cantine so we’d recognize the person if we saw them in our store again.

So I used to have lunch in a room with walls covered in photos of ppls faces with descriptions like “stole 10 steaks.” “Left without paying, took 5 bottles of wine”.”

The identity of the killer wasn’t determined ahead of time, it was simply whoever got the lowest amount of votes from the audience.”

I will sometimes throw in a bit of bad design in the project to let the client find it and request a change.

They always want to change things so rather than them changing something that could jeopardise the design/layout, I throw in something  or them that isn’t meant to be there in the first place.”

The water inside fire sprinkler pipes is black, smells awful, is riddled with cutting oil and has most likely been sitting there stagnant for decades.

Every time I watch a movie where a system goes off and everyone is dancing around in the water I say “that is BS.””

“Not sure if this is just a British thing, but when I worked at McDonalds, they have a leaderboard to show where their drive thru ranks compared to every other McDonalds Drive Thru in the country.

It was pretty intense”

“I knew reality TV wasn’t what it purported to be, but had no idea how bad.

I worked on “America’s Got Talent” season 7 and got to film a few episodes. The most heartbreaking thing was that I watched them take people, people I got to spend an hours interviewing and talking to, people who were passionate, who were trying, and most of the time skilled, and the judges just got to fu**ing mock them on a national scale.

In the season 7 St. Louis episode there’s an older woman who plays the drums, and she was genuine and sweet and excited and in the edits, they make her look loopy and crazy and I think Sharon Osborne alluded to the fact the drummer was a crazy woman. Laughed at her on a national stage.”

“I worked for a company that makes a certain type of electronics equipment. They have an alarm that specifically comes in 8 months after an initial startup. The only person that can silence it is a technician.

There is no point to the alarm but to have a technician come out and silence it, which costs the customer $1000. I used to disable the alarm when I initially started up a machine because I thought this was pretty unethical.”

“Don’t know how pervasive this is, but commercial rum distilleries bottle the exact same rum under different names and in different bottles.

This even happens for major brands, like if the Mount Gay distillery can’t keep up with orders they’ll contract with the Malibu distillery to fill their bottles.”

“There’s a great story about how an airline was getting complaints that bags were taking too long to arrive at the carousel. So they switched to a carousel further away from the gate.

Bags arrived in the same time, but people spent the time walking instead of waiting. Complaints dropped.”

“Working in the auto industry I was surprised to learn how little of a car is actually made by, say, Mercedes or Ford.

There is a complex network of suppliers who specialize in developing and manufacturing most of the pieces that make up a car and then selling them to car companies.

The manufacturers themselves largely just assemble outsourced parts into the final product.”

Now it’s your time to spill your guts!

Tell us about the weird secrets from your industry.