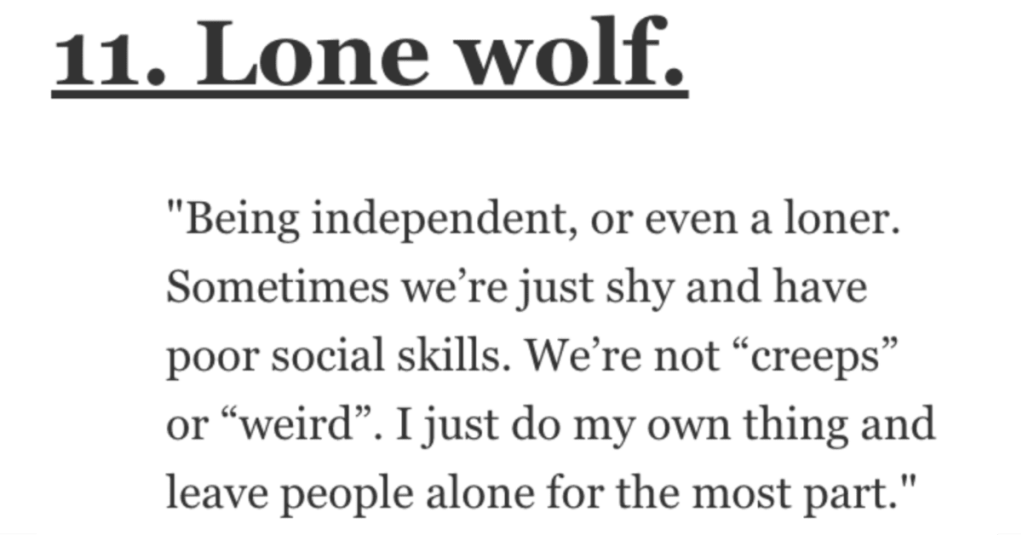 Are people going a little bit overboard with calling out red flags that really aren’t red flags at all?

Had a guy in my class last year who seemed to be somewhat interested in me.

When he asked about my socials and I told him the only thing I have is WhatsApp he immediately seemed really creeped out and didn’t talk to me again.

Took me some weeks to realise what happened. I still think it’s weird as f**k…”

“Being independent, or even a loner.

Sometimes we’re just shy and have poor social skills. We’re not “creeps” or “weird”. I just do my own thing and leave people alone for the most part unless they want me in their life.”

“I’m in my 30’s and have been living with my aging grandmother for about a year now. Sold my house and I work remote.

Most women I meet think I’m incompetent , broke, or flat out lazy (okay, this one is partially true). On the contrary, I’ve held a full-time job for the past 10+ years and I’m sitting pretty well.

I try to explain that she can’t really do the things she normally could and putting her in a home is out of the question. So, I’ll continue to take care of her and dating will be a put on the back-back-back-back-burner. Her comfort is a higher priority than me trying to find a little spoon anyway.”

Everyone thinks I’m autistic or a nerd or something. I have no fucking clue. I kind of shut up about it because I don’t care and I’m not there to try and prove to anyone anything or tell them they are wrong. It’s actually a good filter for me actually.

But every one that works with me, or has to be around me for a long enough time, over time, realizes I’m a pretty cool dude and like to do fun shit.

Someone even told me, “ya know mathaiser, I thought you were a huge dork but you’re actually pretty cool.”

So, what red flag is that? Being kinda quiet/shy. Just because I’m not pressing whatever advantage or peacocking there is, kinda adds to my quality imo. But I don’t think about it like that either. Just trying to explain it.”

“A co-worker of mine dumped a guy because he had never been married at 40.

She thought there must be something wrong with him.

It’s actually laughable to me that this is even remotely considered a red flag.”

A lot of girls get jealous, but if it’s a real friendship and not a bunch of exes and hookups, it actually shows women consider them reliable and good people to have around.”

“I have been criticized and been told I will never be in a good relationship because I don’t want to go to college.

I am sorry that I don’t want to go into debt when I am able to make around the same as a person with a college degree, with only going to trade school for a few thousand dollars.”

“The amount of women I know that take it as a red flag that a guy doesn’t pay for all dates/buy them things.

I’m proud of what I have done with my life and that I can go do those things myself, I like a guy that treats me as an equal. That is not a red flag at all to me.”

“Having boundaries that mean you have to say no.

Employers, manipulative friends and family see you saying no as you being selfish, unkind, not a team player.

You’re really just setting boundaries. Which you have to if you’re going to make it through adulthood.”

“I know most folks are talking relationship stuff, but I’m gonna talk hiring.

Resume gaps aren’t a big deal. We’ve had two recessions and a plague, s**t has happened, get over it.”

I don’t want my partner having my computer/phone passwords and I sure as hell don’t want him snooping through my phone.

I’m not hiding anything, but I am entitled to my privacy, and so is my partner.”

Spill your guts in the comments.