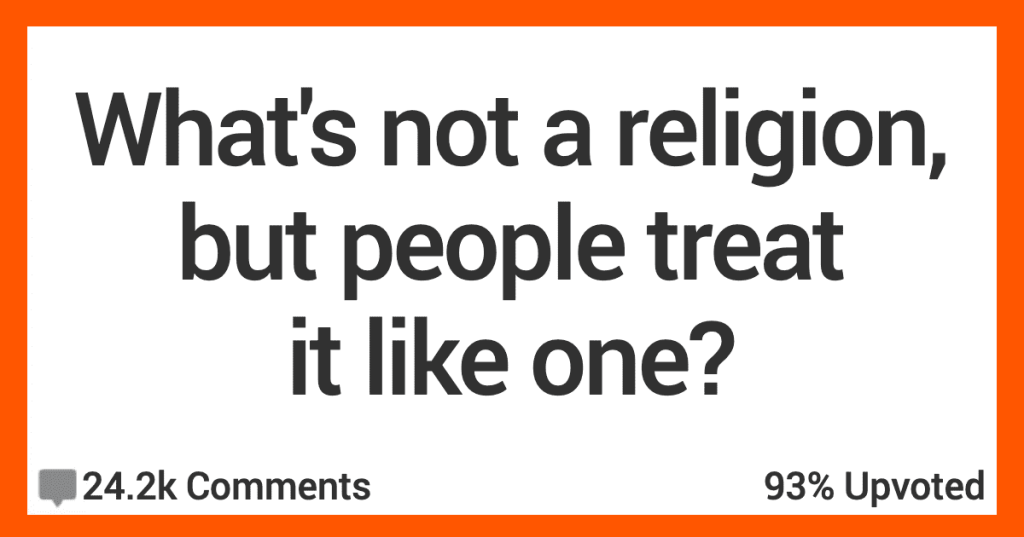 What’s Not a Religion but People Treat It Like One? Here’s How Folks Responded.

Well, this is gonna be a lively topic filled with interesting responses!

I can just feel it!

Because it seems like there are a lot of things out there these days that really do feel like religions because people are so obsessed with them.

Let’s see what folks on AskReddit had to say…

Started getting completely out of hand when my kids were teenagers. I’m a crunchy mom, I’m this kind of mom, or that kind of mom. Those people get rabid.

How DARE YOU listen to advice given to you from a doctor about your individual child, MY group thinks “THIS”. Heresy! Blasphemy! We will CRUCIFY you!

They used to helpful, now they are f**king cults.”

When I was a cable installer, MLM people were my worst fear way more than religious people. One lady spent the entire 4 hours at her house trying to convince me.

“My spouse’s coworker is obsessed with BTS. She’s married but you wouldn’t know it from her social media as it’s all BTS.

I recently met the guy and after a few drinks he confessed that he feels so forgotten and alone in the relationship. He does everything for her.

He shares in her interests but it’s like he’s not there. But, he’s afraid he would never find someone else so he grins and bears it. Dude bummed me out.”

I tell this to my friend all the time and she laughs, yet she’ll sleep in a ditch if she could get to the venue earlier and get to meet the band.

Most religions preach some sort of hope.

College football rarely gives me any of that.”

I own a dispensary, a grow, and a processing lab so cannabis is essentially my life, and even I don’t take it as seriously as some people.

Some people are waaaay to into the culture like to a weirdly fake point where their whole personality is just I smoke weed look at me.”

As a reformed “workaholic/hustler” I can 100% attest to this.

“I would argue that most professional sports are treated like religion.

There’s no England Premier League (soccer) this weekend because of the Queen’s passing.

All of my friends are bored and lost.”

Candidate worshipping is the worst.

They almost always make it look like that that person is some omniscient being that got s**t together always and knows exactly what to do for the country — in silence.”

It lasted FOUR YEARS. Four! Super Smash Bros. Ultimate has existed for longer than the Confederacy ever did.

And yet, people treat it as though it’s an ultra-important part of their heritage and culture.

“Don’t tell people to get over slavery if you still haven’t gotten over your ability to own slaves.””

I have tried AA so many times. It’s just not for me, it’s so dogmatic and some of the “holy rollers” of AA have this huge superiority complex they inflict on others.

I’m glad it works for some people in establishing life long sobriety but it is just not for everyone. And they h**e that. One of the main things of AA is that it’s the “one true path” to sobriety and that’s just not realistic.”