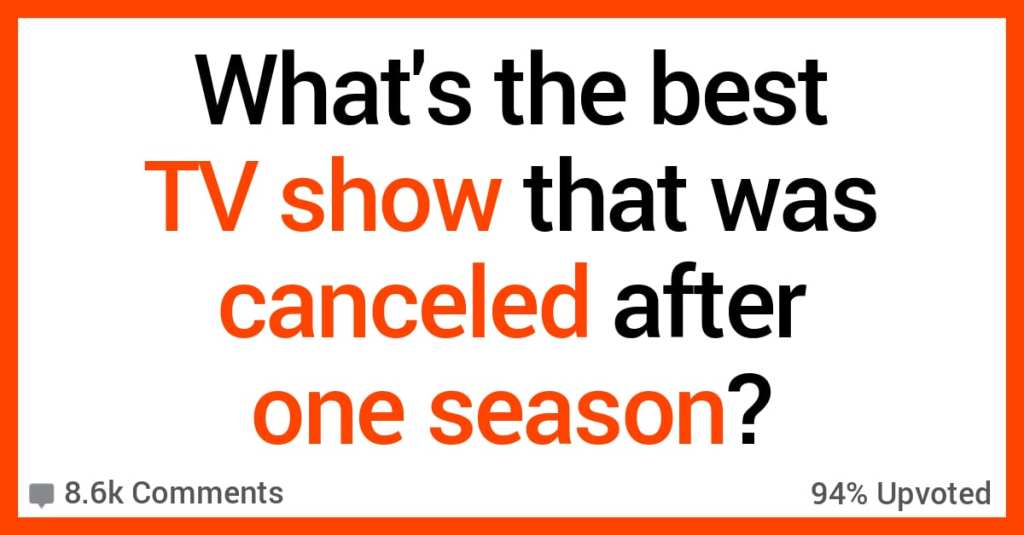 What’s the Best TV Show That Was Canceled After Just One Season? Here’s What People Said.

I know my answer to this one!

It would have to be Freaks and Geeks.

If you haven’t seen it, it’s a show about teenagers in the early 1980s in suburban Detroit. It really was a great show and it launched the careers of so many people, including James Franco, Seth Rogen, Linda Cardellini, and others.

And, sadly, it was canceled after only one season…

So let’s hear about some more!

AskReddit users shared their favorite shows that were canceled after only one season.

It’s a crime tv show about an immortal medical examiner

Incredibly good show, but i think it flopped in the US and therefore never got a second season.”

Such a cool concept of 2 timelines, where in one his wife died, the other his son. Used both “realities” to solve crimes.

Just felt like they could have done so much more with another season or two.”

I enjoyed this show so much and then blammo, it’s gone.

Karl Urban was great in it.”

“Jericho (It was canceled after season one, but super-fans pushed for another season and got a few more episodes)

I saw it on Netflix for the first time and was absolutely dumbfounded that it just ended.

Definitely one of the best shows I’ve ever watched. I couldn’t believe and still can’t believe they didn’t continue it.”

6. A classic in the making.

It only had 13 episodes, which coincidentally is also the number of people who watched it.

But it really was a classic in the making.”

This show had me wearing my hair tucked behind one ear for all of 6th grade because I thought it looked so cool and sophisticated.”

Luckily a kickstarter was funded for a follow-up movie!”

Of course it came back years later in movie form as The Naked Gun.

They had so much potential for more stories in that universe.”

Not sure if this only aired in Canada or USA too.

It was like a season-long horror movie with characters getting picked off 1 per episode.

I was a kid when it aired and loved the suspense each week.”

“The Adventures of Brisco County, Jr.

I loved that whole show! I watched them as they aired when I was a kid and was so heartbroken they canceled it.

My parents still bring up my reaction from time to time. I basically threw a fit.”

It was written by the same person who wrote Gilmore Girls and had the same smart, fast-paced humor.”

A show on NBC that was a modern-day take on David and Goliath.

It starred Ian McShane as the Goliath King Saul character, Christopher Egan as the David character, Susanna Thompson as a compelling matriarch, and Sebastian Stan as a gay prince.”

I mean, I know there was only one season because Terry died before a second book could be made, but it still doesn’t make the disappointment go away when you finish the final episode…”

It was a Netflix Original that didn’t make it past the first season, but I thought it was pretty great.

It’s very similar to Freaks and Geeks (which is funny since they only got one season too) except it was set in 1990s instead of the 1980s.”

“Selfie. The one with Karen Gillan.

The premise is simple, a bubble headed social media addict realizes during a business trip that her life is a mess due to her addiction and seeks help from a guy opposite to her.

The show started being dumb, but as the episodes went by, it became entertaining.

Sadly the showrunners burned the character’s development by rushing the plot and it got cancelled before premiering the last few episodes.”

“Pan Am it was actually a really good show from what aired.

A period drama that worked really well. I don’t even think the full season aired to be honest.”

It wasn’t necessarily the best show but I really enjoyed it. Was a really good jump scare horror that I enjoyed and wanted to know the answers in Season 2.

“Anyone remember Now and Again from the 90s?

John Goodman gets hit by a train and his consciousness is transplanted into Eric Close, a super-human government prototype in a program run by Dennis Haysbert.

They’re using him to fight terrorism, he’s secretly trying to reconnect with his family. It was nominated for a bunch of Emmys, but I heard it was too expensive to continue.

The only season ended in a huge cliffhanger. I’m still sad about it!”

In the comments, tell us what you think is the best show that was canceled after only one season.