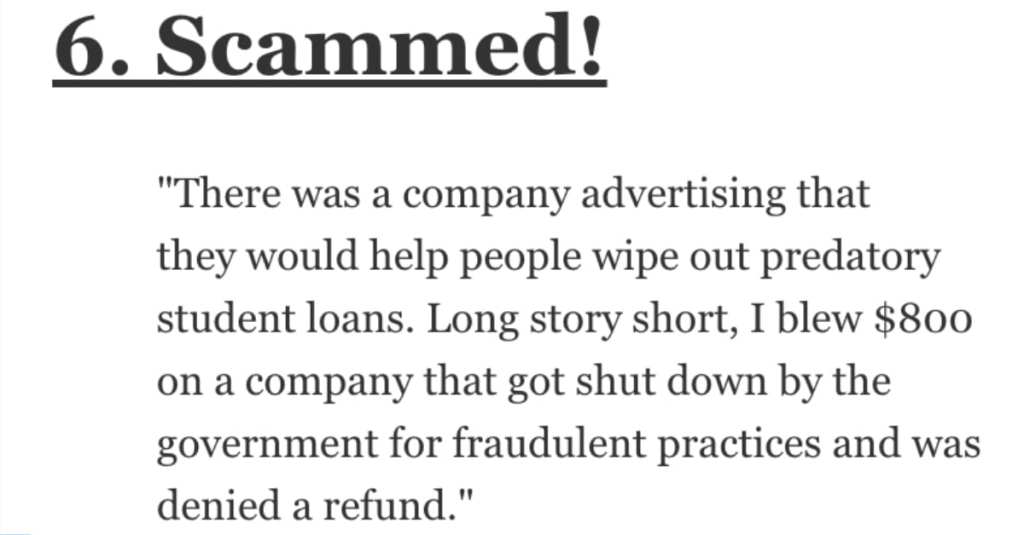 What’s the Biggest Scam You Ever Fell For? People Spoke Up.

It always breaks my heart when I hear about people (particularly older folks) who get bilked out of all their money because they fell for a scam.

And it also makes me want to find the people responsible for those scams so I could have a few words with them.

Bottom line: there are a ton of scammers out there doing everything they can to try to separate you from your money.

What’s the biggest scam you ever fell for?

“There was a company advertising that they would help people wipe out predatory student loans.

Long story short I blew $800 on a company that got shut down by the Gov’t for fraudulent practices and was denied a refund.”

They (their therapists) waste a week of your time to reply once and reply with a canned response of, “oh that sounds stressful, how is your sleep schedule?”

I cannot stress enough how much of a waste of time and money that s**t was.”

“These people called me with one of HMRC numbers telling me I didn’t pay some taxes, saying they sent lots of letters to my old address to which I never responded.

I didn’t know they could make me see the number they wanted. After a quick check on the government website I saw that the number was the same and I believed them. I was 20 years old and living in London on my own.

4. Could have been worse.

“Not too bad I lost 35 bucks. I fell for those stores on Instagram.

I was just getting on it so I didn’t know most were scam stores. Because I followed some small retailers that I already bought from.

I thought it was the same thing. Website was or looked legit but I never got my boots.

Smart too because I got it from them because they were 15 bucks cheaper. Not some crazy amount that made you question it.

Luckily I paid with PayPal. It could’ve been worse if they had my credit card information.”

“My former best friend and his dad cheated me out of my money to invest in their company.

When I asked for a contract, his dad said, “Between true friends, words aren’t necessary.”

When they started making money, I asked for my money back, and they said they didn’t owe me a thing.”

“There was a company advertising that they would help people wipe out predatory student loans.

Long story short, I blew $800 on a company that got shut down by the government for fraudulent practices and was denied a refund.”

“Right after my dad died I got a call from a number I didn’t know.

They left a voice mail saying they needed my social security number so they could pay out a life insurance policy to me. I was 21 and super inexperienced with stuff like this. So I did what any real adult would do. I asked my mom for advice.

She told me it was legit and to give them my SS number. I had a weird feeling about it but if my mom said it was ok then it must be ok. I did it. I called back and gave the guy that answered my SS number.

I never got a check but my mom suddenly did from a policy my dad “forgot” to take her off of even though they had been divorced years before.

She did give my 10k but I’m 100% positive it was worth way more and she had something to do with it all. We don’t talk anymore for various reasons including this one.”

“I went to buy a Rolling Stones ticket from a scalper years ago (i know, i know) and he talked me into a VIP Backstage Pass. He said that’s all I need!

Free food, booze, all the perks. He insisted the sticker was all I needed to get in, no paper ticket necessary.

So a few hours later I go to the show, obviously can’t get in – it was a VIP pass from the night before. There was no date on it, just a different shape.

I try every single gate hoping someone won’t notice/not care and finally try the media entrance. The nice lady ushered me right in, I took an elevator up to the main concourse and I was free as a bird. I didn’t have a seat obviously but I snuck down to the floor and ended up having a great show.

Still feel burned by the stupid f**k to this day though. I’ve seen him at other shows (nice neck tattoo of a fish, you fu**in’ pr**k) and I always f**k with him.”

“It happened while I was at work in a grocery store (no longer working there for unrelated reasons). Overworked, stressed out of my mind, and probably had some form of sleep deprivation going on at the time.

Answered a customer service call for Western Union during a very busy time and had a severe lapse in judgement that resulted in me doing a transaction over the phone (the biggest thing they drill into our heads NOT to do).

I thankfully didn’t get any further (only one transaction went through rather than several) before things clicked and I hung up on them horrified. Reported it asap for damage control and spent the next few days praying that I wouldn’t lose my job for it (transaction over the phone = fire-able offense).

Thankfully, since I didn’t have a problematic work history my boss was able to save my job with the only caveats being retraining and a note being on file for at least a year. Huge self-esteem and mental health loss though, felt like a gigantic idiot for months afterwards.”

“I was in Rome walking around when a guy came up to me and handed me a rose saying it was a gift. I took it, and then he demanded money.

I refused to pay, and tried to give it back (should have just placed it on the floor). Long story short, my friend saw me from across the plaza arguing and came over.

The guy wouldn’t leave me alone, so my friend paid him off. I felt so bad.”

It looked official and asked for me to login to update my password. When I realized the website didn’t allow me to view my profile I panicked. I then spent the day taking the nessassary precautions.

Have you ever been scammed before?

If so, please tell us all about it in the comments.