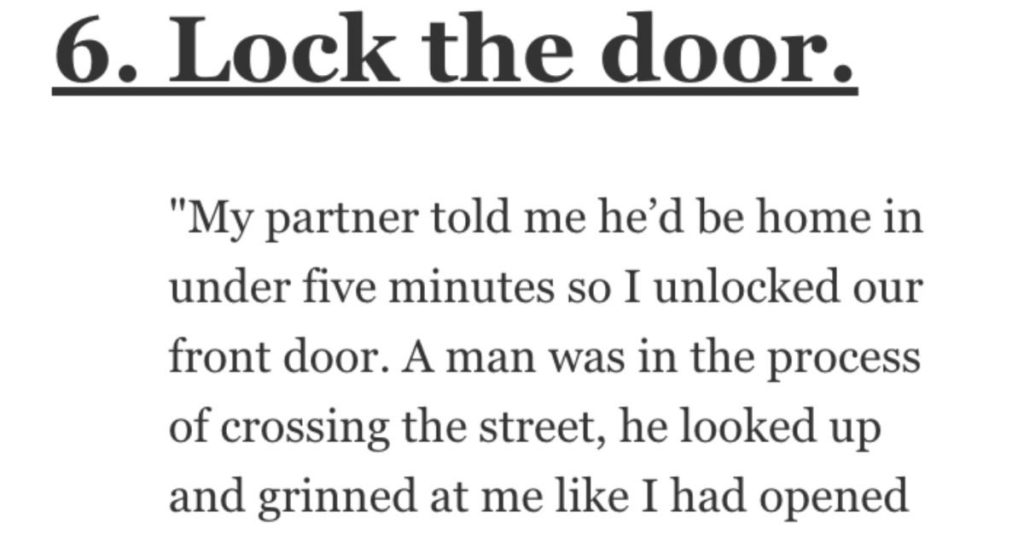 What’s the Creepiest Thing You’ve Ever Seen in the Middle of the Night? People Shared Their Stories.

The creepiest thing I ever saw late at night is when I was driving home from work in Chicago at about three o’clock in the morning and a guy with a g** was standing in the middle of the intersection trying to get me to stop.

The streets were pretty deserted at that time of the night, so all I could do was put the pedal to the metal and get the hell out of there.

What’s the creepiest thing you’ve seen in the middle of the night?

“I was up late playing video games in the house alone around 3 in the morning.

My Dad was working the late shift, and came home in the morning, but sometimes he’d come home for lunch break halfway through the night, grab a quick bite, and head back out.

My heart sunk into my stomach, and I was frozen in fear. I sat there for a few seconds, and then stood up. I slowly walked down the hall to the front door. The door was locked, deadbolt and all. I flipped on all the lights and started searching every area of the house scared to d**th someone came in and was hiding in my house, but I couldn’t find anyone.

In the morning I asked my Dad if he came home, but turned around and immediately left, but he said he brought lunch with him that night and didn’t come home to eat.

I still think about that night over 10 years later. I can’t explain what happened. I heard the lock, the door, and someone come into the house as clear as crystal, but no one came in. I can’t explain it.”

“This happened back in the 1980s in Miami. I’m there for a conference, it’s about 4 am on a Tuesday.

So I call the the front desk and the clerk asks if I could ID the two shooters. “No,” “then just forget about it”.

Never made the TV or the papers, intersection was cleared by 8.”

We had rented a cabin in Northern Michigan. It had a pretty nice screened in porch. The bottom part of it was permanent glass though. I was just laying there watching the stars roll by, kinda drifting in and out of sleep.

Eventually I decided its time to go to bed and get some proper sleep, and I knocked a beer bottle over as I stood up. It made a loud noise, and this screaming noise came from just outside the porch, along with 3 very fast knocks on the glass.

I freaked out, darted inside, and flipped on the lights. Nothing by the window, but off about 30 feet into the yard was a freaking mountain lion staring back at me with these white yellow eyes.

Pretty sure it had settled against the house for the night, and I freaked it out when I got up and it swiped the glass in defense.

In that moment in the dark I was quite sure it was a possessed spirit.”

“I’m an extremely heavy sleeper, I’ve slept through a severe storm that put a tree through our porch and a car wreck in front of our house. My husband is an extremely light sleeper and will wake up if a mouse tip toes in our basement, 2 stories beneath us.

We live way out in the country, on roughly 80 acres of mostly woods. One night I definitely woke up to the sound of the heavy steel doors of the hatch to our cellar. We just had a crowbar through the handles holding it secure because it was bricked and sealed off at the bottom of the steps making the house inaccessible. But I heard the distinct sound of the hatch clank.

My husband is still snoozing, blissfully unaware of whatever is going on outside. I literally whispered my husband’s name and he immediately woke up. I whispered what I heard and he started to telling me I imagined it when we heard foot steps running across our gravel driveway. He looked out the window to see someone run into the woods behind our garage.

We called the cops but nothing ever came of it. Absolutely terrifying.”

This person started to scream, over and over again, outside somewhere. I think it was a man, because it was lower than the highest register of a woman’s possible voice, but it was like a full out scream. Not a manly yell, like in the movies, just this awful repetitive horror.

All of the dogs in the neighborhood started to bark. It kept going for about ten minutes as I sat totally petrified in bed. Then it stopped, I heard a car door shut a moment later and someone slowly drive away.

The dogs kept barking for a bit after. I woke up my mom, she didn’t know what to do. I fully expected to find out someone had been murdered or something the next day, but never heard anything. It was so disturbing. I still wonder what happened.”

“My partner told me he’d be home in under five minutes so I unlocked our
front door.

A man was in the process of crossing the street, he looked up and grinned at me like I had opened up just for him.

He made a b-line for our house and I slammed and locked the door so fast. “

“I lived in a rural area my house was dead in the middle of a 20 acre plot. The surrounding area was farmland used for livestock that nobody lived on.

Nearest neighbor was over a mile away. I was downstairs watching TV late at night and someone walked past a window and looked in for a second. I woke everyone up and we went outside looking for the man I saw.

We found nothing. Years later I was going through old pictures with my grandmother and saw the same man. He was the old groundskeeper and he d**d 10 years before I lived there.”

“In high school, I saw headlights and heard a loud THUD around 1 or 2 am. I cracked the front door and saw a car that sped away. They hit my pickup truck that was parked along the street.

They went immediately to a gas station and robbed the cashier at g**point. Following that, they ambushed a taxi driver and shot him in the back of the head for no reason. I EASILY could have been m**dered that night.

I mentioned that story to my wife the other day and she says, “I know. Both of us could have d**d that night, I was the cashier they robbed.””

9. What’s that doing there?

“I was on an overnight kayaking trip. A friend and I sat around the fire for most of the night. We decided to split up and go gather firewood.

There was not much wood around the camp site so I ended up walking a decent distance into the woods. My flashlight caught something shiny dangling from a tree branch. I walk closer to see what it is and realize it’s a necklace.

I grab it to examine it and it’s a Saint pendant just hanging from a branch in the middle of nowhere. It creeped me out a little, so I hung it back up and hiked back to camp.”

“Working a night shift from home, heard some large thuds outside, figured it was someone unloading their car next door.

Next morning someone with a hazmat suit was power washing the driveway of blood. It was a m**der three doors down.”

“I was up late one night and I noticed out the window that a white van parked in front of my neighbors house, who my family is very close with.

I knew it wasn’t their van, and I could make out that there was an older guy in the driver seat and probably the passenger seat too

It sat there for like 15 mins which weirded me out, eventually the van door slid open and some guys got out and walked down the block but split in a couple of different directions.

Still have no idea what the fuck that was about and I didn’t hear anything.”

“My old rental house always gave slightly haunted vibes but nothing that wasn’t easy to ignore.

One night my boyfriend and I are getting ready for bed, lights are off in the house except the bedroom. I left the bedroom to grab something from the kitchen. As I am in the kitchen, I distinctly hear a little girls voice in the living room which is between the bedroom and kitchen.

I thought my boyfriend was messing with me so I walked back in the room and asked him what he said. The way he looked at me told me he heard it too and it wasn’t him.

We didn’t talk about it as we both believe acknowledging spirits gives them more power. Anytime anything creepy happened the routine was don’t talk about it and try to avoid thinking about it. Move on and don’t give it power.”

Have you ever seen something creepy in the middle of the night?

If so, share your stories with us in the comments.

We love to get creeped out!