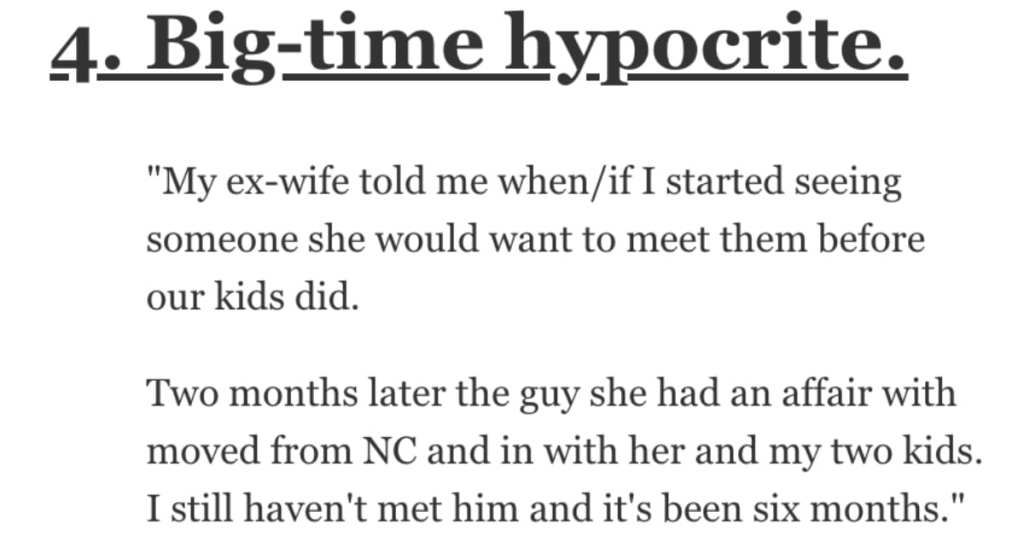 What’s the Most Hypocritical Thing You’ve Ever Witnessed? Here’s How People Responded.

We really hope that the stories you’re about to read don’t get you too angry, but we feel like these tales of big-time hypocrites need to be out there.

Take them for what you will, be we like to think of them as cautionary tales about future hypocrites that you might run into in your own lives.

Folks on AskReddit went on the record and shared the most hypocritical things they’ve ever seen.

“Reading stories about “The only moral abortion is my abortion.””

“There was a girl in one of my classes that spent the entire class on facebook every single day.

During a presentation she was giving one day someone noticeably checked their email. We all saw but… we all also knew that she was on Facebook every single day for the entire class.

That’s why we were all very surprised when she stopped the presentation to scream at this person for being rude and disrespectful and then stormed out.”

“A woman who used to lived a few doors down from me was an extreme feminist “all men are pigs and rap*sts deep down, never trust your kids with a man, men are the reason women can’t progress” all that jazz.

She was convicted of domestic assault and indecency with a minor and sent to 2 years in prison. She’s only did a year and a few months though I think.”

“My ex-wife told me when/if I started seeing someone she would want to meet them before our kids did.

Two months later the guy she had an affair with moved from NC and in with her and my two kids.

I still haven’t met him and it’s been six months.”

They talk about the faith and being one with God, but then go and post sh*t online that’s the exact opposite of what’s in the book. And will argue about it to anyone who points it out.

Covid saved me from family gatherings last year and I couldn’t be happier about it.”

“When I was a teenager I tried to buy an Eminem CD at the store but my mom told me I couldn’t because his lyrics disrespect women.

She then picked up a Michael Jackson CD and put it in her cart. This was during the hype of the trial and I told her she shouldn’t buy that because she’s financing a child mol*ster’s legal team.

“I knew a 3rd generation immigrant woman once, and this story aside, she’s really very sweet.

She was Lebanese. Lebanon is basically a little coastal slice of Syria that gained independence after her family left. They left because much like recent events, the region became a little unstable and dangerous.

I was eating breakfast at her kitchen counter, as she stood in the kitchen and watched Fox News on the tiny counter TV, clucking in disapproval at the footage of refugees entering our country.

Then she put hand on her hip and said, and I’ll never forget this:

“Ugh – Wouldn’t all these Syrian immigrants just be happier back where they came from?”

LADY, YOU’RE LITERALLY A SYRIAN IMMIGRANT. I CAN’T EVEN.

I had to straight up leave.”

“My parents telling me that I didn’t have to watch church with them if I did not want to.

So I kindly pointed out that he was being disrespectful to me for not sticking to his word. Long story short, I had to watch church.”

9. Thinning out your friend group.

“As of late, people not wanting to grab a drink with me or do things with me citing that they feel nervous about Covid.

Only to see them posting stories several days later drinking and socializing. It’s definitely made me realize who my true friends are.”

“People who get really upset about animal abuse and claim to be “animal lovers”, and then go eat a double cheeseburger at McDonald’s.

Cognitive dissonance is alive and well.”

“All of my relatives that get paychecks from either the state or the federal government decrying socialism.”

“My boss – a priest – telling me I wasn’t allowed to live with my boyfriend.

Only to find out a few years later he was sleeping with someone who wasn’t his wife.”

Okay, now we want to hear from YOU.

What’s the most hypocritical thing you’ve ever witnessed?