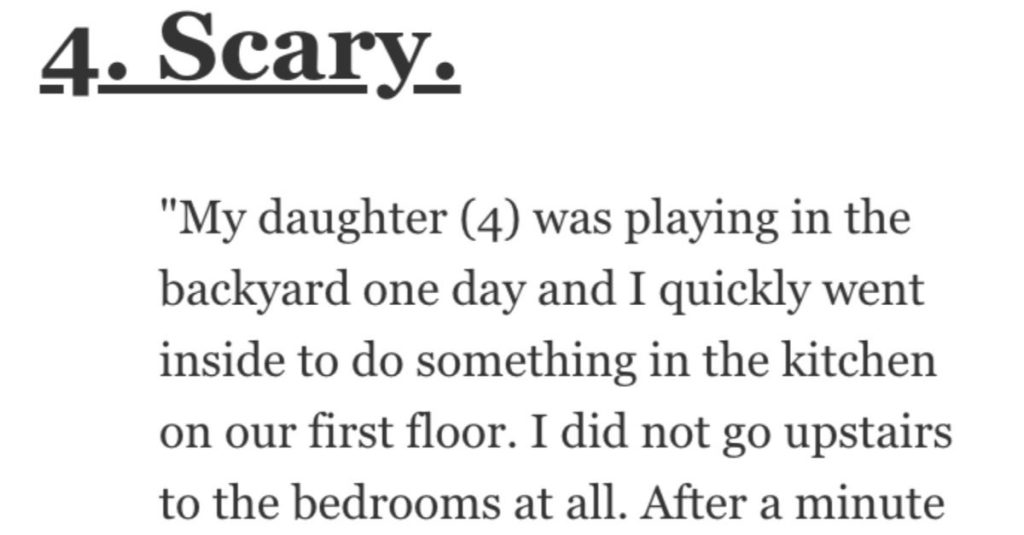 What’s the Most Unsettling Thing Your Child Has Done? Parents Shared Their Stories.

I think I saw The Exorcist too many times growing up, because I find children to be kind of terrifying.

Am I alone in feeling this way?

I don’t think so!

And these stories from AskReddit users are going to reinforce the fact that children are creepy.

“Me and my 15 month old share a room and sometimes she just stares at me while I sleep.

It freaks me out when I wake up and the first thing I see is a tiny child staring at me.

To make it worse sometimes she just stares and whispers at me and it sounds like she’s putting a curse on me.”

“My son was almost 3 years old when he called me to his room about 5 minutes after he was put to bed.

I asked him what’s wrong, and he replied “I’m scared”. I asked him “What are you afraid of?” “I’m scared of the old lady with the angry, red eyes!”

I figured he saw something on the telly or his ipad, so I, while bent over his baby bed in the corner, asked him where he’d seen this old lady with the angry, red eyes. “She’s standing right behind you”.

D**n, that was chilling. Worst of all, I turned around, slooowly, looked around and said there’s nobody here – everything’s ok. Kissed him goodnight and left him but let the door halfway open.

Still feel bad about it, but wasn’t going to let some angry old, red-eyed ghost b**ch f**k with my family.”

“My son had an imaginary friend named Xavier… but Xavier was the ghost of a little boy who was in his room.

He’d have whole conversations with this supposed ghost. It was f**king creepy. He forgot all about him within a few weeks of starting preschool and has no memory of him now.”

“My daughter (4) was playing in the backyard one day and I quickly went inside to do something in the kitchen on our first floor.

I did not go upstairs to the bedrooms at all. After a minute or so I came back out. She said “mommy why were you in my room? I saw you look out the window at me!”

This freaked me out because we were the only people home at the time. I said I didn’t go upstairs and she insisted she saw me look out her window. With great hesitation I went upstairs to look around but nobody was in my house, ghost or otherwise.”

5. Sleep with the light on.

“My son was around 4 years old. I was driving him to daycare, and he was uncharacteristically grouchy. Didn’t want to go.

After around the third time I explained that mommy had to go to work, he got real quiet. Then, his tiny voice piped up from the backseat: “The darkness is watching you. In the night they’ll come for you”

He never explained it. I slept with the hallway light on.”

“My youngest slipped and fell in the shower when she was 8. She broke her two front teeth.

Fast forward to last year, she told my wife and I that she did it on purpose. She was intending to break her arm so she could get sympathy from her friends at school.”

“I went into check on my sleeping daughter, who was four at the time, and she rolled onto her back, and muttered in her sleep, ” I must not eat humans, humans aren’t food”.

And then rolled back on to her side.”

4 year old wakes up screaming, running into the living room, looking right at me as as I try to comfort him and looks right through me and then at me, as if I was the most horrible thing he’d ever seen or could have ever imagined, and then some.”

“For a while, when my son was 3/4, he would cry and scream because he dreamed there was a tall man at the end of his bed, who was completely black and had holes where his eyes should be.”

“My daughter insists she lived on Mars before she was brought to earth to be born.

She’s 12 now and still brings it up occasionally. It’s funny because she’s so casual about it when she mentions it.

To this day, I can’t tell if she has a really good imagination or, if she really believes it.”

“My son when he was about 3 years old was always trying to go under the table at restaurants, always fidgeting and just not willing to stay seated, so eventually we gave up and just let him move around the table.

One day he came up from the table with his cheeks puffed out like a chipmunk, I looked at him and said open your mouth, he had a mouth full of gum. Gum he found on the bottom of the table.”

“My child asked to bury her father and dig up his bones later. For science.

She’s now in college pursuing an Anthropology and Archaelogy degree. Father was not buried in the yard.

Around the same time frame, she laid down in the front yard and told me the exact spot she wanted to be buried. I told her it was too close to the well.

Kids can be hella morbid and weird.”

Has your child ever done anything creepy?