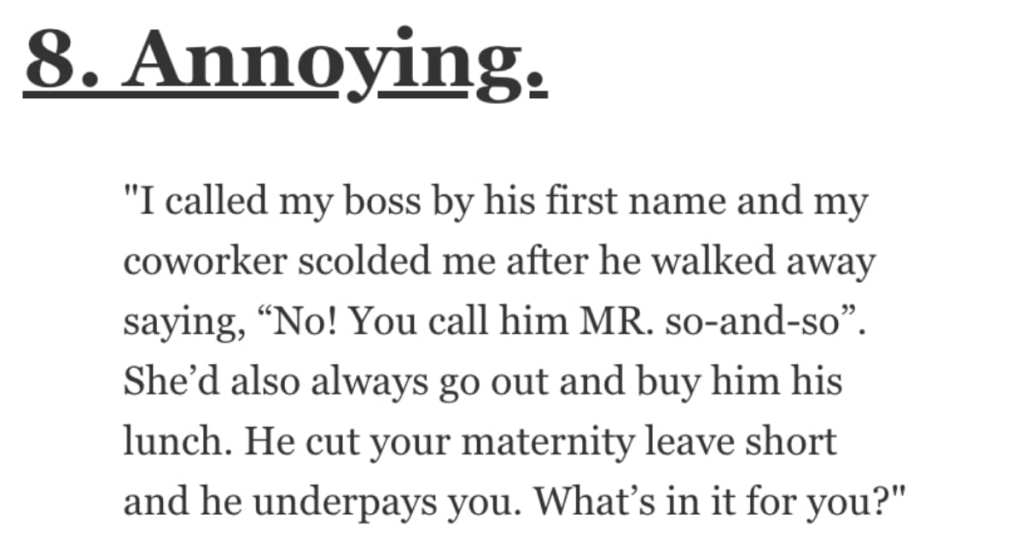 Is there anything worse at work or school than a brown-noser?

It’s enough to drive me (and you too, hopefully) up the wall!

But, as you already know, these types of folks are lurking around everywhere…and I think we should all do our best to avoid them as much as possible.

So, what’s the worst example of brown-nosing you’ve ever seen.

1. Trying to prove himself.

“The worst was a guy I worked with at my last job doing HVAC…because the boss was going to get a full report on whatever crew he worked with that day.

If you said something negative about the boss, he was going to tell. If you were a minute or two late coming back from lunch, he had a pic on his phone with the time stamp. If you didn’t hang something perfectly level or straight, he’d toss a level on it, snap a pic, send it to the boss. He also came in every Sunday and washed all the trucks (with no pay) to make sure we kept a good image,

Found out eventually it had nothing to do with the job…he was just dating the boss’s daughter and he was trying to “prove” himself.”

“Had a coworker in my marketing team who was a lead designer.

He was often pretty dismissive of junior level employees, or would try and one-up everyone’s stories (you tell him you stayed at a hotel at the beach over the weekend, he tells you he stayed in a penthouse at the same beach for a whole week).

He also always tried to be in proximity of senior staff members and would brag loudly if they were within an earshot, hoping they would hear how awesome his life is, I would assume.

One day, a VP from our company had come up to talk to somebody in a pod close to ours. The pretentious designer loudly asked me about my weekend, I gave him an answer.

He responded loudly, one upping my answer, noticed the VP wasn’t paying attention to him at all, quickly got up, hovered behind the VP while he was talking to the other employee, eventually the VP cracked a joke and the designer let out the loudest, fakest laugh I’ve ever heard, startling the VP, who up until then was not aware that this guy was standing behind him. VP just got an awkward close lipped smile, quickly nodded his head, and walked away.

Designer came back to our pod, sat down, and started working as if he was never mid conversation with me.”

“Coworker would talk up the boss during meetings.

“Mrs. Boss, you’re the smartest person I’ve ever known! I wish I had some of your brains.”

“Other receptionist at my work is a huge a** kisser.

Calls herself the head receptionist when she’s really just a part timer that doesn’t do her job right. Will constantly have “meetings” with the bosses and take credit for things other people do.

Most recent example is when a client brought us donuts and left them at the front desk. I was in a room but heard the convo between the client and her about the donuts being a gift.

Then heard her walk to the back and announce to our boss that she (receptionist) ordered them donuts because they work so hard.”

“Fake laughter at the boss’s jokes.

Laughter that goes on for WAY TOO LONG so that even the boss notices and gets PO’d.”

“This f**ker at my work was just promoted because he’s an a** kisser.

Constantly jumps over people to perform a task, but only when the manager is around, that kind of c**p. Recently, he wrote on our manager’s door (he has a dry erase board for messages) “(Managers name) is the GREATEST”.

F**king cringe. I h**e this dumba**, and I respect my manager less for falling for it.”

“This was actually pre-work.

Canada’s largest airline had an unqualified secretary screening the applications for pilot positions. She would determine who got interviewed and who got put to he bottom of the pile.

Some guys would send her chocolates…literally….and get an interview two days later, where others had waited years. Others would send flowers.

It was close to criminal the way she got bribed, and there were a lot of examples. She was finally heavily demoted for her actions, but she should have been canned.”

“I called my boss by his first name and my coworker scolded me after he walked away saying, “No! You call him MR. so-and-so”.

She’d also always go out and buy him his lunch.

He cut your maternity leave short and he underpays you. What’s in it for you?”

“At my job there was this guy who kept buying his direct supervisor lunch every day.

One time the supervisor asked him why he kept doing it, he responded with “The king’s gotta eat”.

Everyone in the immediate area cringed super hard at that, including the supervisor.”

“One particular co-worker is almost insufferable with his behavior.

Constant trumpet blowing with his lackluster work, endless comments about how much money he has, degrading other team members to get some kind of moral high ground and get in good graces with management.

What’s more cringe is his posts and interactions on the team member WhatsApp group, really fake or cheesy c**p that definitely is not his character at all.

Basically everything that he does involves trying to s**t on someone to look better at his job.

Anyway, he thought he was top s**t after one of the managers recently left and applied to take the advertised Duty Manager role. He was shut down almost immediately and apparently one of the night managers straight up told him that they did not want him to work nights due to nobody wanting to work with him.”

“As a blackjack dealer in a casino I had a floor manager that h**ed me. The feeling was very mutual.

One day I was secret shopped and received a 100% with some outstanding personalized comments on it. The higher ups were so impressed that the head of Table Games came down from on high to give me 50.00 worth of cash gift cards (unheard of, we normally get 5.00 buffet vouchers).

This all took place in front of the floor who h**ed me. Then he reaches in his pocket and hands me a card for “an entry into a drawing for a 10.00 cafe credit” and tells me I did good. F**ker used my 15 seconds of fame to make himself look good to the dept head.

It kinda backfired when I handed it back and said “no thanks, I know you don’t mean it.” Dept head hauled my a** upstairs and asked what I meant. I didn’t need the job so I unloaded every single instance of harassment, s**ual harassment, hr investigations, and backed them all up.

Covid hit while he was suspended and he was not invited back when they reopened.”

“I had a coworker that went to the boss’s apartment to massage his feet.

The boss was a power-mad tyrant with zero oversight.

The coworker was a complete sh**bag. I think he made it to work on time only 1 time in 2 years. And he was a compulsive liar. He lied about s**t that he didn’t even need to lie about.

Coworker was having car troubles so the boss let him borrow one of his cars. The coworker let slip that he had been at the boss’s place massaging his feet.

He said it absentmindedly, as if he wasn’t really paying attention to what he was saying. I was like, “Hold up!” He tried to claim he was just joking about it but I could tell the truth.”

In the comments, tell us about the biggest b**t kissers you’ve ever met.

We can’t wait to hear from you.