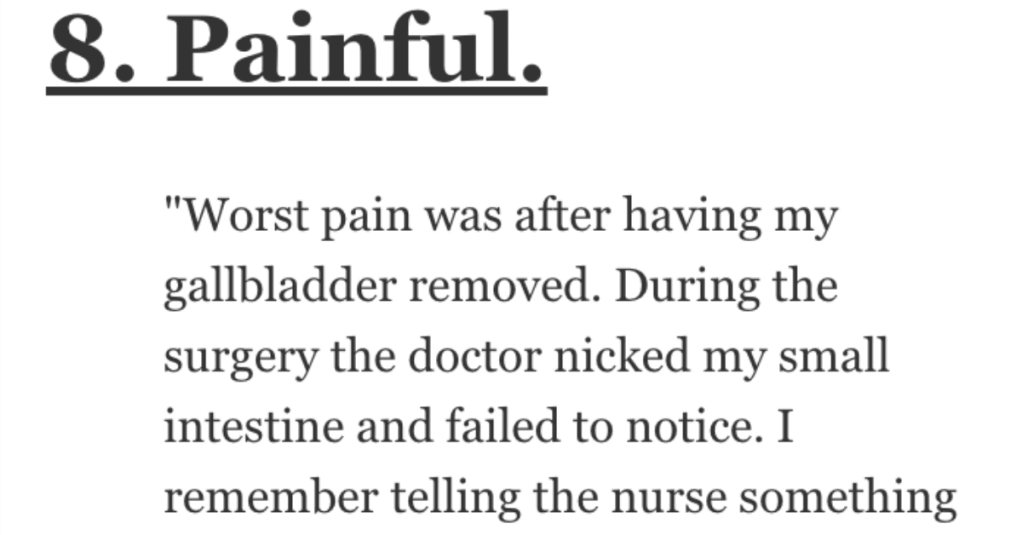 I know my answer to this question!

I had a kidney stone when I was about 21-years-old and it was ROUGH.

AskReddit users talked about the worst pain they’ve ever experienced.

This is gonna be painful…

“A long term constipation that finally decided it was time to go.

You know those stomach cramps you get when you have bowel/stomach problems? Ok, so, kick the pain up by about 4x and make it last an entire day. For most of the day nothing came out and I barely felt anything move. I tried laying down, chugging water, exercising etc. Basically everything your suppose to do short of laxatives to help initiate a bowel movement.

Just this constant pain that would randomly get really sharp like I was getting stabbed for a minute at a time and make me feel like I needed to throw up. Got to a point I passed out from exhaustion at one point. Finally, near the end of the day the main blockage finally passed and everything just flowed out. Cannot properly articulate how much relief I felt once it was over.

Best way I can describe the whole thing is trying to pass a brick followed by gravel. Just an overall terrible experience.”

“I collided head to head going for a ball in the air in a soccer tournament in college.

Fractured skull, solid concussion, but the worst was hours later when an epidural hematoma began to develop between my skull and the lining around my brain.

It felt like someone slowly dragging a knife along my forehead. Worst pain I’ve ever felt by a long shot. Doctor said that was the blood having nowhere to go and the pressure tearing the lining away from the skull to create space.

For anyone wondering I was rushed to surgery, they called a brain surgeon from home cause at this point it was like 9pm, sawed off a flap of my skull, “evacuated” the blood, and now I’ve got some titanium additions to my skull. Pretty metal. Pun intended.”

“So basically when you let a UTI go untreated for too long, you get this awful pain in your kidney? I think kidney? Idk lol. Somewhere in your lower back.

So I had been getting UTI after UTI again and again for almost 2 years. So my brain kinda started to tune out the pain.. you can see where this is going lol.

It was New Years, about 1AM, and I was laying down going to sleep, and my lower back kind of hurt. The next time I woke up I was sobbing my eyes out in so much pain. I ended up throwing up just because the pain was so bad.”

“Shingles on my face.

Even a hair touching my face would feel like I was being electrocuted.”

There is no sub-lethal dose of pain k**lers that is sufficient to make that tolerable.

It sucked so very VERY much.”

“I broke my arm when I was younger. Full on in half. Bent funny. Broken.

But it was a clean break! No fragments. The doctor obviously needed to set it. It wasn’t so bad that it was a “do it right now to keep your arm” bad though. So I was given the choice to either wait 24 hours from that moment, no eating, and be put under anesthesia. Or do it now no pain meds.

Doctor came in with 3 nurses, plaster, and a towel. My Dad held his hand out for me to squeeze. I remember him saying “Okay. You are much braver than I am.” They gave me the towel to bite down on.

And then 2 nurses bent my arm back, one nurse held my legs down, and the doctor began wrapping my arm in plaster. Worst 10 minutes of my life. I could FEEL my arm stressing against the inside of the cast for DAYS.”

The “size 10” ones I wanted to blow out the middle part of my head with a gun to make it stop. Today I have a “Size 8” one and I just want to go to the ER and have them put me into a coma.

A while back I broke my wrist. I didn’t know it was broken so I waited till the next day to go in. Bought a brace at CVS. I didn’t take any paink**lers. It “kinda hurt” overnight. Compared to migraines, I realized.”

“Worst pain was after having my gallbladder removed.

During the surgery the doctor nicked my small intestine and failed to notice. I remember telling the nurse something wasn’t right and I couldn’t urinate. Straight cathed me and sent me home. I was on my couch telling my wife that the pain was worse that I had ever experienced.

Went back to the hospital via ambulance and spent the next 24hrs being ignored thinking I was looking for pain meds. Septic shock, 9 surgeries, and near total organ shut down I survived with an ileostomy. ICU, hospital and rehab totalled just shy of 3 months.”

“Feeling my appendix start to burst.

Heard a voice screaming in pain and realized it was mine.”

“Tearing my Achilles tendon off the bone while hang gliding using my coat at the top of a hill, and then walking [down] the mountain for 3 hours on it.”

“You ever hear about that guy that jumped off the Golden Gate Bridge and he left a s**cide note that said, “Nothings wrong, just have a tooth ache”?

“A deep inner ear infection. The pain was excruciating.

I’ve experienced worse “peak pain”, but this….. the pain was constantly there, it felt like it was inside my brain. I couldn’t think straight.

It took almost two days for the medication to ease the pain.”

“Bent my tail bone 90 degrees inwards (sports injury). If it had broken, would have been relatively quick and easy to heal, instead it took the better part of 7 years.

Turns out a lot of nerve endings live down there and for a long time I needed paink**lers (strong ones) just to go to the bathroom without passing out (there were other, even more awful side effects I won’t go into).

Tell us your story in the comments.