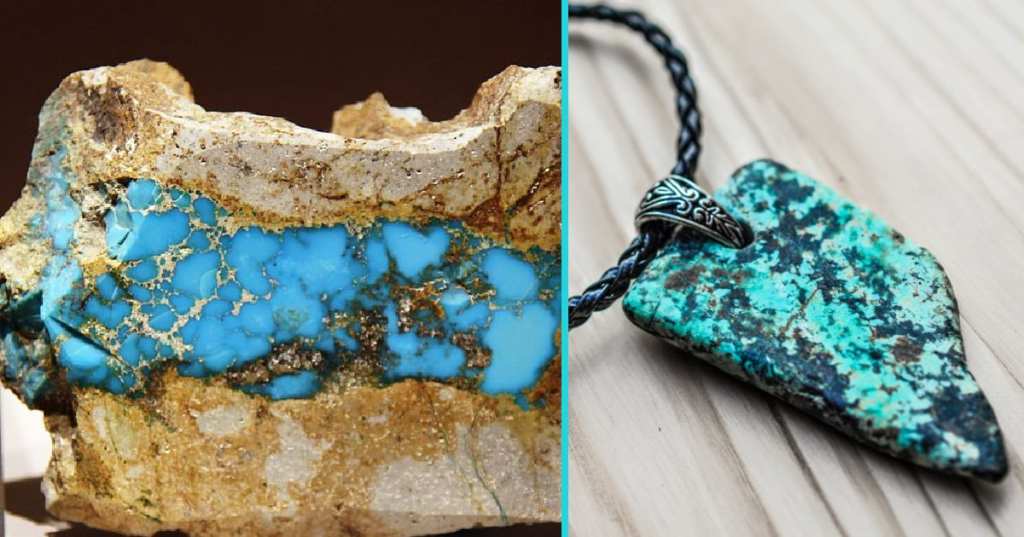 When Turquoise Is More Valuable Than Diamonds

The truth is, there are a lot of stones and gems out there that are more valuable than diamonds. The coveting of diamonds, the idea that they’re the end-all, be-all for women around the globe, that you must have a large one ready if you’re going to propose marriage, is all a marketing scheme.

That said, if I asked you to name a gem other than a diamond that has a large inherent value, I bet you would say a ruby, or maybe an emerald. 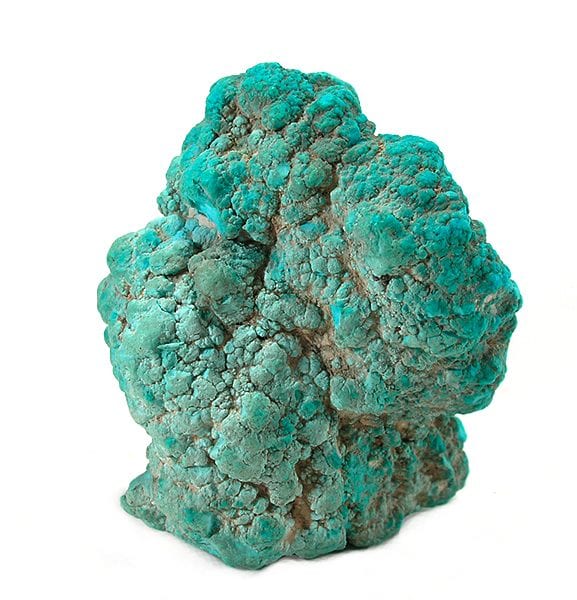 There are people, though, who have been mining, buying, and selling turquoise in the American Southwest for generations – people who know it’s history, it’s value, and can pick out both with a quick glance at the raw stones.

People like Michael Garland of Sedona, Arizona, whose family has worked with American Indian art for four generations.

He told How Stuff Works,

“Turquoise has a fascinating and unique history. This beautiful stone has captured human imagination all over the globe for thousands of years, from King Tutankhamun’s death mask to Aztec and Mesoamerican art.

Turquoise has been cherished and used by the Southwest Native American Indian tribes for centuries in trade, for ceremonial purposes, and to enhance their beautiful art forms — from sandpaintings to jewelry. Its rarity and beauty continue to make it a highly coveted stone.”

Cultures all over the world have long treasured the precious stone, and though its chemical compound is well known, the truth is that its value goes far beyond the science. 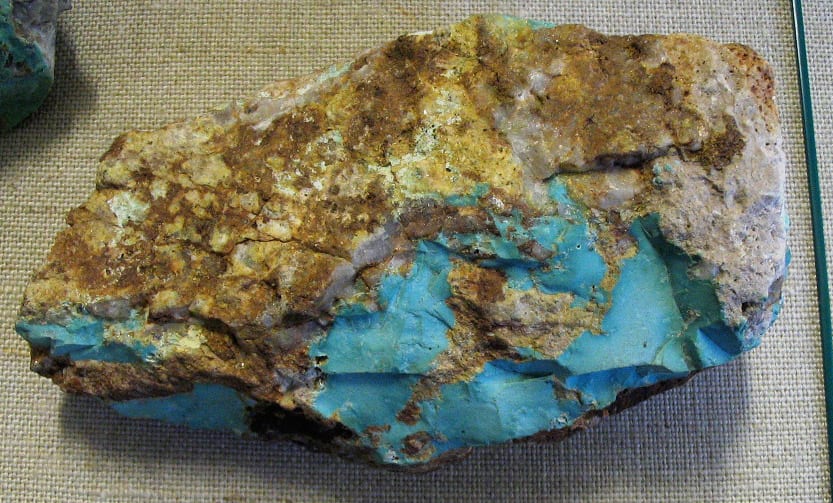 “Turquoise is formed by a complex combination of aluminum, copper, phosphorus, water, and other local ingredients that may change the color or add matrix (host rock). Turquoise is found at elevations between 3,000 and 8,500 feet (914 and 2,590 meters) and typically in dry, arid climates.

Only certain regions on earth provide this recipe for turquoise to form. Turquoise mines in the Southwest United States are the most famous, such as Bisbee, Lander Blue, Number Eight or Lone Mountain. However, other areas in the world produce high quality natural turquoise such as Iran, Tibet, China, Egypt and Kazakhstan.”

Emerald Tanner and her father, who own Tanner’s Indian Arts in New Mexico, talk about how the value can vary widely.

“The value of turquoise comes from the quality and rarity of the stone. Some mines produced tons of material over numbers of years — others, only a hundred or so pounds and for a very short period of time. Turquoise can be as soft as chalk or as hard as a 6 or 7 on MOH’s scale — the harder and more intense colors tend to be more valuable. Another variable in valuing turquoise is comparing all-natural turquoise to ‘stabilized’ or ‘enhanced’ turquoise.”

The fact is there’s a lot of turquoise out there – but not a lot that’s strong enough to survive the cutting and polishing process.

There is a process for “strengthening” turquoise that’s not naturally strong enough, but since it has to be manipulated and stabilized, it’s not as valuable.

Which means that even though you’ve probably seen something touted as turquoise in gift shops all over the world, only about 10% of turquoise on the market is natural and untreated.

The tanners say this definitely matters.

We always encourage anyone looking to purchase turquoise or turquoise jewelry to ask questions about the stones and forever say ‘if you don’t know your turquoise, know your turquoise dealer.’ Natural gem quality turquoise is one of the most rare and collectable natural commodities of our world. It is indeed a special stone and one to be collected and celebrated.”

Turquoise is graded like any other gemstone, on the four C’s of color, clarity, cut, and carat weight. There are other factors to weigh, as well, such as where it was mined. 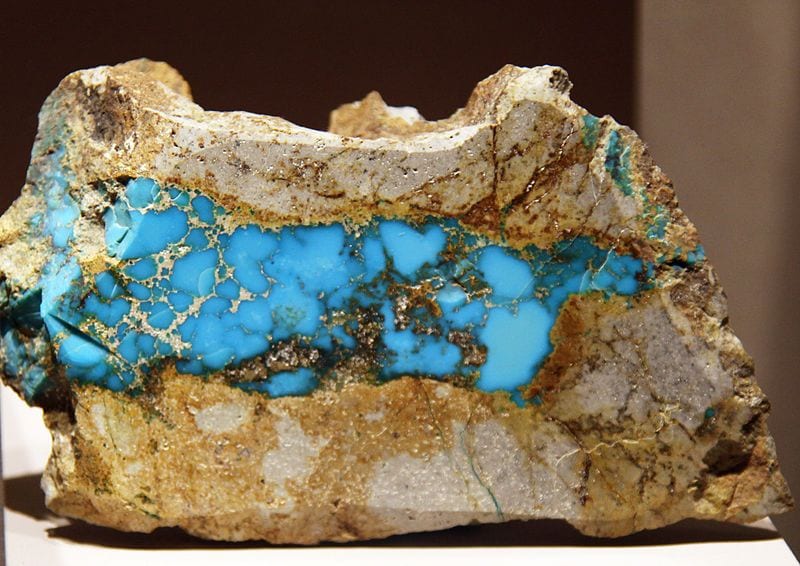 Since it’s so much rarer than a diamond of the same grade, turquoise definitely qualifies as more valuable.

It’s worth more than gold, as well, and most other precious gems that people consider high value.

Garland says that, when it comes to turquoise, the hardness, aesthetic beauty, and rarity all play a huge role.

“Only a small percentage of all turquoise mined is naturally hard enough to be used in jewelry. In some cases, as much as 90 percent of the turquoise mined is chalky and soft and would need to be stabilized in order to be used. The top-level of turquoise that is naturally hard enough to be used is called ‘natural’ or ‘untreated’ turquoise. Within this top tier of natural turquoise, there are further categories such as ‘high-grade’ and ‘gem-grade’ that describe the absolute best and hardest natural stones.”

When it comes to aesthetic beauty:

“The depth of the stone’s color and the presence of matrix or host rock can both add value. Deeper, darker colors are generally more expensive. Tight webbing in the matrix (called ‘spider webbing’) can also add value to turquoise. There is an ongoing debate regarding value in the turquoise world: matrix vs. clear gem turquoise,” they write. “A gemologist will tell you the more clear, the more perfect the stone, and the more valuable. Collectors and Native American jewelers may deem the more matrix with intense and beautiful webbing, the more valuable.”

And last, the stone’s rarity:

To put that in perspective, that’s more than $1.1 million per pound. Why is it so expensive?

Because it is considered to be some of the hardest and highest grade turquoise ever discovered. On top of its quality, it was an extremely small deposit — only about 100 pounds was mined before the deposit completely ran out in the 1970s. The rarity, combined with the quality of the stones and their aesthetic beauty, makes Lander Blue the most expensive turquoise mine in the world.”

It’s not uncommon, then, for gem-grade turquoise to sell for anywhere before $40-$200 per carat – nearly four times the price for the same amount of gold, even at the low end. 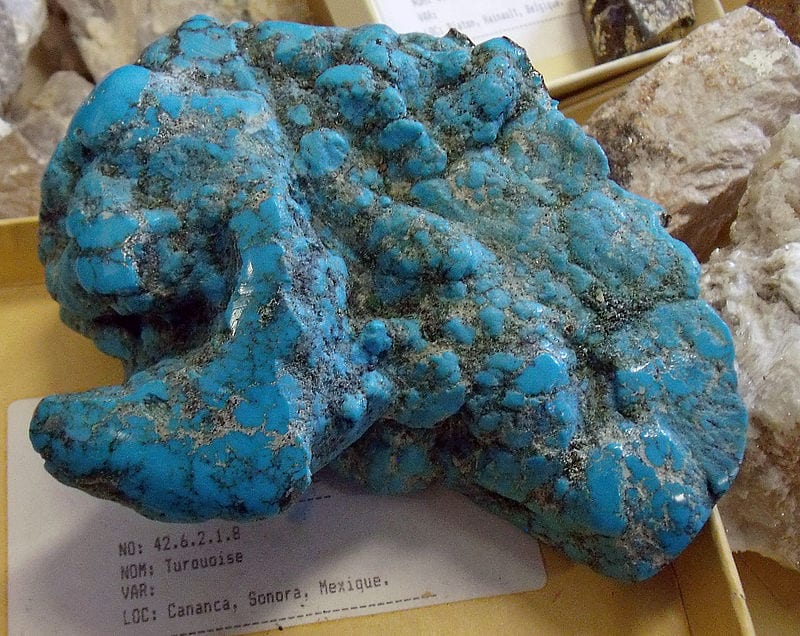 All of the experts recognize the significance the stone has for Native Americans who populate the American Southwest, and the Tanners make sure to point it out at every turn.

“Turquoise is a sacred stone to many of the Native American tribes of the American Southwest.

The unique appeal of turquoise comes from its color kinship to the sky and compatibility to water, which is the most precious thing in the Southwest.”

The Navajo, especially, says Garland, have a connection to the stone.

“Turquoise took on special meaning for the Navajo people, specifically, as one of the four sacred stones of the Navajo tribe.

Along with white shell, abalone and jet, these stones are associated with the Four Sacred Mountains, which form the traditional boundaries of Navajoland.”

In short, there are many things that make a stone valuable.

When it comes to turquoise, none of them are man made, and marketing is the last thing on any miner’s mind.

Just a few things to think about the next time you pass through a gift shop or visit a gem show – the turquoise might be a better investment than you might have thought!